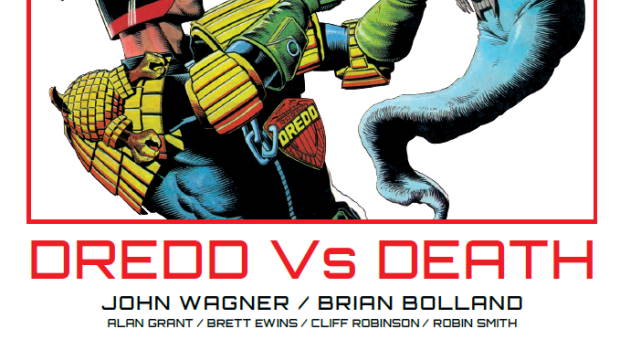 Summary: A collection of stories featuring Judge Death and his attempts to bring his form of justice to Dredd's world.

I don’t think I’d actually read a Judge Dead story until fairly recently. I’d been aware of the character thanks to the fantastically macabre appearance of Judge Death, meaning any time he was on a cover or showed up in some collection of images, he was unmistakable. But it wasn’t until I had a chance to actually read some stories involving the dark Judge that I learnt just how horrific he is. The Essential Judge Dredd: Dredd Vs. Death enabled me to catch up on the introduction of Judge Death and his attempts to mete out his own form of justice.

There’s something about the way British comics are written that makes them stand out from their U.S. counter parts. In the case of 2000AD and specifically the Judge Dredd series it’s kind of funny because it’s British writers writing a future dystopian U.S. and there’s no sugar coating anything… it’s dirty, it’s dark, it’s harsh. I think all of those things are what drew me to the comics in the first place. But here we have Judge Death and things take a whole new horrific turn. The image of Judge Death is terrifying enough, but reading about the things he does and how he does them just adds an extra level of creepiness and fear to the character. With all the doom and gloom it’s probably just as well there’s some humour thrown in via Psi Judge Cassandra Anderson.

As mentioned, Judge Death is an unmistakable character. That withered body with curled back lips exposing that distinctive toothy grin all wrapped in the mortifying version of a Judges uniform tells you pretty much everything you need to know about the character in an instant. For me it’s somewhat a close call for who looks more terrifying, Judge Death or Judge Mortis… within this collection the artwork for both certainly instills fear regardless of which is holding court on the page. The overall quality of the artwork is excellent to and takes me back to my youth of reading Judge Dredd and Dan Dare. That clean line work and excellent use of cross hatching for all the texture you could want… it’s often the simple things that are the best. This comic has a mix of Black and White and colour, both provide some great visuals and rarely do panels get a bit over crowded or difficult to determine what is going on… which is a decent achievement as there is a lot taking place in these stories.

I’m generally not a big fan of horror (I don’t mind the “horror comedies” such as the Nightmare on Elm st series etc… but not the more gritty serious stuff). Judge Death is very clearly horror… the torture garden certainly made that clear for me. This works as a great introduction to the character and despite being squarely in the realm of horror… I think the Judge Dredd setting makes it somewhat more palatable even for a non horror fan such as myself.

Grab a copy if you are a fan of Judge Death or Dredd… or even if you just like horror. But certainly a great addition to your Judge Dredd collection for something other than the usual perps around Mega City One.