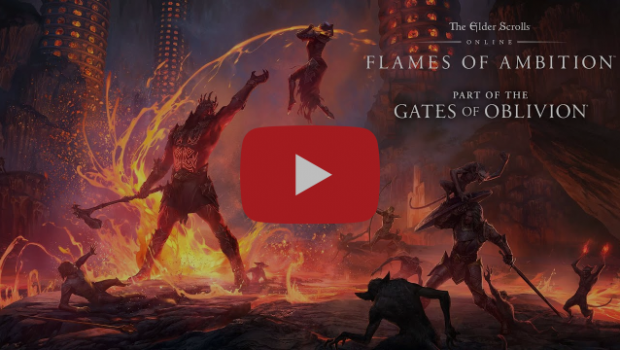 The Elder Scrolls Online: Flames of Ambition DLC game pack is now live and available for purchase on PC/Mac, bringing two new epic dungeons and kicking off 2021’s year-long Gates of Oblivion story. In addition, Update 29 has also gone live for PC/Mac, introducing a host of free changes and improvements for all players, including a redesigned Champion System for high-level players.

Flames of Ambition and Update 29 will arrive on Xbox One and PlayStation 4 on March 16.

Within the DLC and free base-game patch, players will find:

TWO NEW DUNGEONS: Black Drake Villa and The Cauldron
In Black Drake Villa, players will team up with the adventurous Wood Elf scout Eveli Sharp-Arrow and search the hidden archives of a once-proud mansion that is now home to monsters and arsonists. Players can learn more details about Black Drake Villa on the ESO web site.

In The Cauldron, the cult of the Waking Flame has enslaved the local townsfolk and now excavates sinister ruins deep within a long-forgotten mine. With the help of the Dremora Lyranth, players will battle their way through Daedric beasts and cultists, free the captives, and put a stop to their plans. Players can read more about The Cauldron in on the ESO site.

In addition to the new Champion System, Update 29 includes other improvements and fixes, including an updated character sheet that shows advanced stats. Players will now better see how changes to their character (be it via Champion Points, abilities, gear, or attributes) impact their effectiveness.

Players can access the Flames of Ambition DLC via an ESO Plus™ membership or purchase it with Crowns from the in-game Crown Store. The patch notes with all the details for Flames of Ambition and Update 29 are located on our official forums.