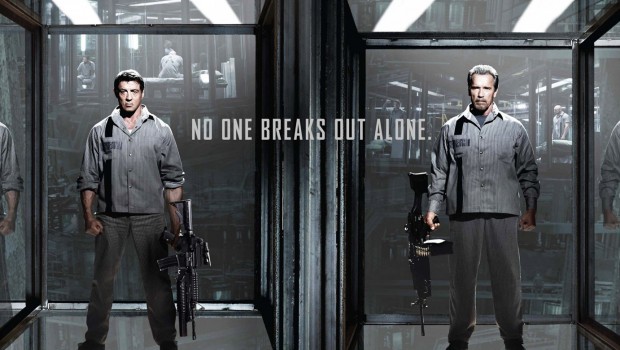 Most people would do anything to stay out of prison. Ray Breslin (Sylvester Stallone) isn’t one of these people. Hired to test the security of national prisons, Ray is locked up and treated like any other inmate. It is from here this professional prison breaker uses his skills to escape any way he can. When Ray is hired to break out from a maximum security prison in a secret location, not all goes according to plan. Cut off from the world, he is forced to seek help from fellow inmate and all round badass Rottmayer (Arnold Schwarzenegger).

With The Expendables raking in serious money around the globe it is no surprise to see these aging heroes back to bust heads and butcher the English language once more. Both actors have made a career from action films while playing tough guy characters many of us have either grown up with or simply grown to love. The very obvious elephant in the room is the fact that these two action men have aged considerably since their Terminator and Rambo days. Sly still resembles an over stuffed sausage and Arnold would look more at home in a night gown and slippers as opposed to prison attire. These factors combined with an over the top scenario and setting for this film make Escape Plan look quite ridiculous, and assuredly it is ridiculous. No right minded viewer would go into this film expecting a tightly woven prison drama so the questions remains, is it worth a watch? The answer is yes, for the most part. 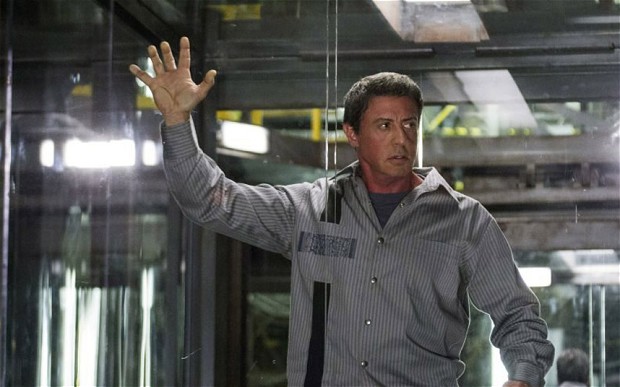 The plot for this film is absurd but the prison setting allows for plenty of macho man punching and testosterone fuelled confrontation. The characters are cardboard all throughout but fun enough to keep things rolling. Typical one-liners in the script help this lack of character depth. Jim Caviezel plays over the top, sadistic prison warden Hobbes and he does a fine job. His performance is a large part of why this film works. He is a good actor to keep all the surrounding ridiculousness under control. Sam Neil also pops up as the prison doctor lending further stability to the film. For some reason 50 Cent has been cast in has one of Sly’s cohorts. He does his best to act but it feels like watching a puppy ride a bike: amusing but unstable and silly. The pacing of the film is done well and when things start to drag, someone either insights a prison riot or gets into a battle of wills with Hobbes to keep you interested.

Escape Plan is a film that will be mostly forgotten but easily enjoyed. It is a film for action fans and those who still enjoy watching Sly and Arnie bumble through their zimmer frame, butt kicking, and badass action roles. The film is absurd and over the top in almost every way, but it remains a fun watch for the right crowd.

Summary: Is it worth a watch? The answer is yes, for the most part.