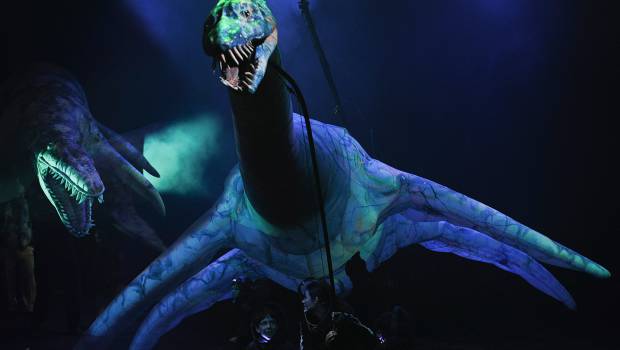 Summary: With large scale creatures brought to life by a surprisingly small team of extremely talented puppeteers, Erth’s Prehistoric Aquarium is an engaging trip into the past that allows for the audience to get as up close and personal with myriad extinct beasts as realistically possible in the modern age.

A delightfully entertaining multimodal performance piece from the creative Erth team, who previously brought us the well-received Dinosaur Zoo, Erth’s Prehistoric Aquarium is an engaging and educational deep dive into the realm of some of Australia’s long lost underwater dwelling beasts.

Opening with a quick introduction by a pair of performers, one boisterous and fixated on social media and youthful slang to an almost obsessive degree and another more studious Marine Biologist, the Erth team ease the audience into suspending their disbelief and immersing themselves into the experience of exploring the seabed and the ancient denizens that once roamed its stygian waters.

With the scene set and an audience participant helping to show us how the performers will be interacting with these beasts, a series of unfortunate mishaps leads to the Marine Biologist and her intrepid band of young underwater explorers to find themselves in the deepest depths of the ocean. 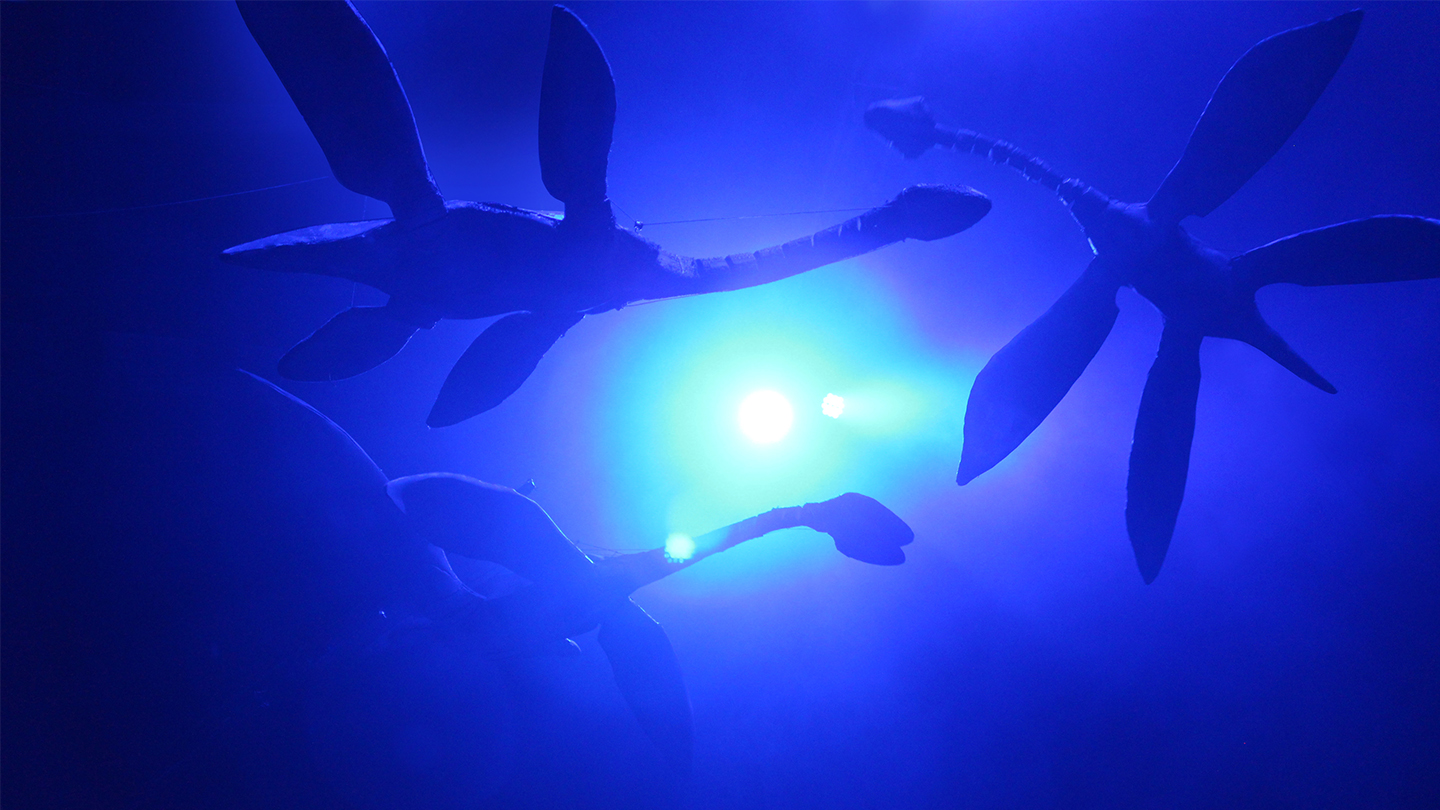 This is where the performances really opens up; whereas initially the puppeteering takes place behind a faux viewing port (In reality a gauze screen), once the team descends to the ocean floor they begin to really interact with the large-scale puppets and the audience finally gets an understanding of how massive and intricately designed these creatures truly are.

Among the highlights were a giant Angler Fish, with it’s glowing organs visible through its translucent skin, and an epic battle between a fiercely protective mother Plesiosaur and a predatory Kronosaurus.

The creatures take on convincing movement and there were periods where they were able to come out from the stage and hover above the bemused audience, much to the delight of the enraptured children. The narrative of the performance is comprehensively designed in order to educate as well as entertain, with a healthy focus on prehistoric Australian history in particular.

The show clocks in at just under an hour, which means that your littluns won’t get too fidgety, as is their wont, and although some of the jokes flew over the heads of the younger audience, much of the humour lands and, most importantly, remains wholesome throughout. 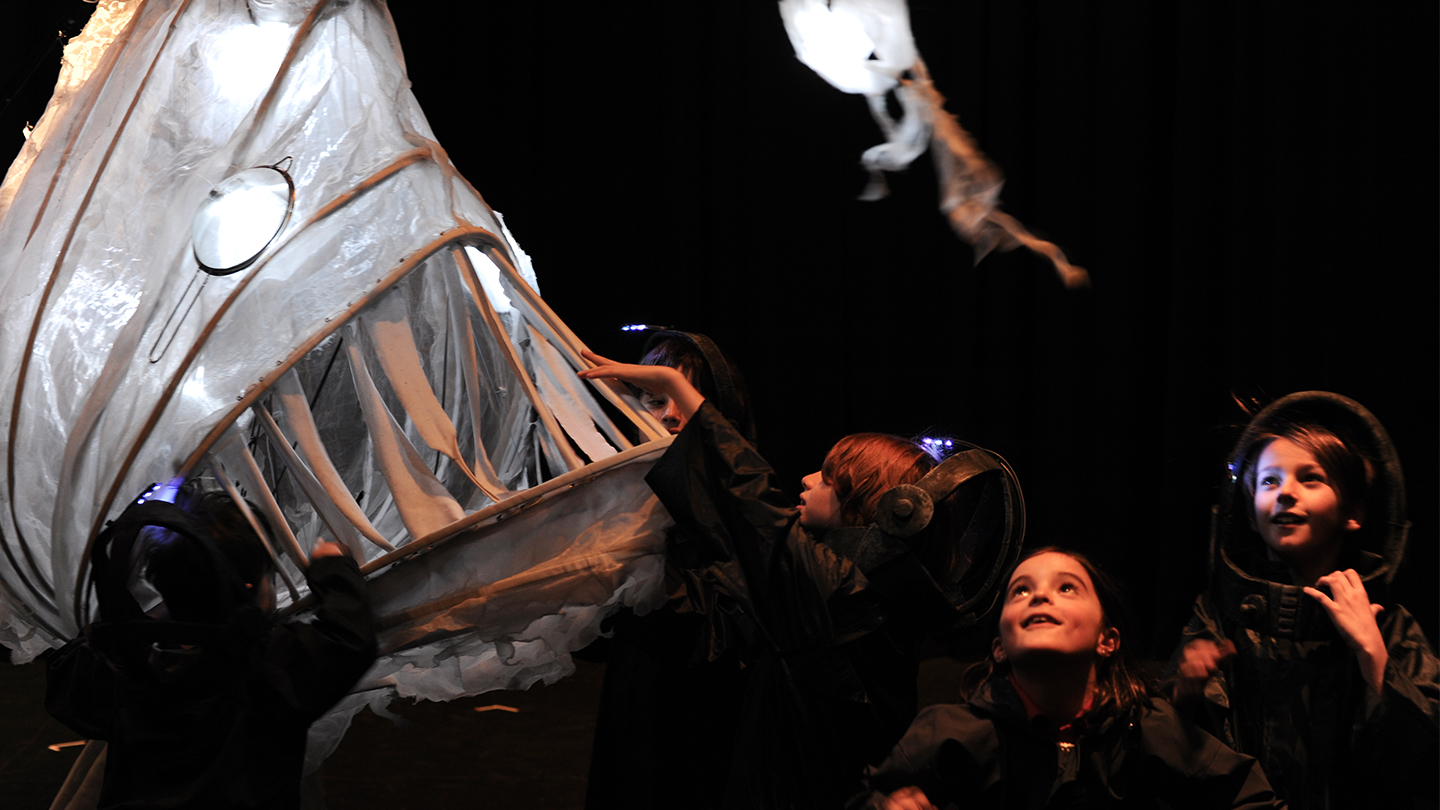 With large scale creatures brought to life by a surprisingly small team of extremely talented puppeteers, Erth’s Prehistoric Aquarium is an engaging trip into the past that allows for the audience to get as up close and personal with myriad extinct beasts as realistically possible in the modern age whilst also providing a fun and family friendly learning experience for anyone interested in Dinosaurs and other prehistoric creatures, which, lets face it, is pretty much anyone with a heartbeat between the ages of 5-12.

(As a brief aside, if you’re feeling peckish after the performance, or indeed any other performance at the Arts Centre, there is a terrific little café called Bombino Buzz situated just beneath Hamer Hall; with an affordable and varied menu of different items, including their new Mason Jar salad dishes, and arguably one of the best coffees in the City, the Staff ensured that myself and my peckish little tag alongs were well looked after following the performance.)

Tickets and more information can be found here.