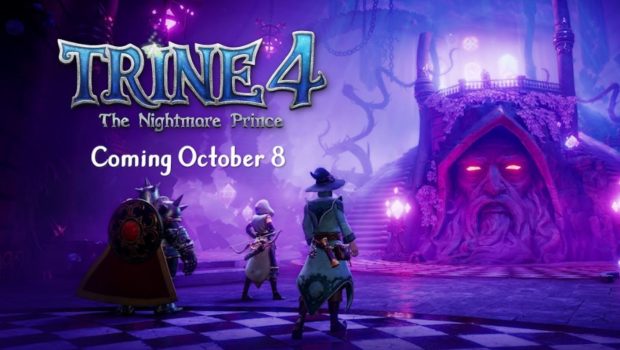 Premier indie publisher Modus Games today released a new story-focused trailer detailing what’s at stake in the world of Trine 4: The Nightmare Prince, the puzzle platforming series that makes a triumphant return to Nintendo Switch, PlayStation 4, Xbox One and PC on October 8th.

Trine 4: The Nightmare Prince finds series stars Zoya the Thief, Amadeus the Wizard, and Pontius the Knight reunited to track down Prince Selius, an overzealous youth whose wish to wield magic has enveloped the kingdom with shadowy creatures beyond his control. Prince Selius’ ability to make anyone’s most potent fears a reality leaves little time for the trio trailing him to reverse the curse, as the prince’s dream-fueled spells grow ever more dangerous.

Set within a charming fairytale universe rife with wondrous sights and perplexing puzzles, Trine 4: The Nightmare Prince elevates the fan-favorite co-op series to new heights. Overhauled combat and expansive skill trees help players get as invested into the action as their preferred hero, and the game’s puzzles change based on how many players are in a group to make sure exploration feels as satisfying solo as it does in a team of four.

Trine 4: The Nightmare Prince will be available at launch both as a standalone game as well as within Trine Ultimate Collection, a series-spanning bundle which also includes Trine Enchanted Edition, Trine 2: Complete Story, and Trine 3: The Artifacts of Power.

**Preorder Bonus**
Digital pre-purchases are now available for Trine 4: The Nightmare Prince and Trine: Ultimate Collection on PlayStation 4, Xbox One, Steam, and GOG. Users who pre-purchase Trine: Ultimate Collection on PlayStation 4 will get instant access to Trine Enchanted Edition, Trine 2: Complete Story, and Trine 3: The Artifacts of Power. All digital pre-orders will also include launch day access to the bonus DLC level Toby’s Dream.

Trine 4 is supported by the Creative Europe Programme – MEDIA of the European Union.