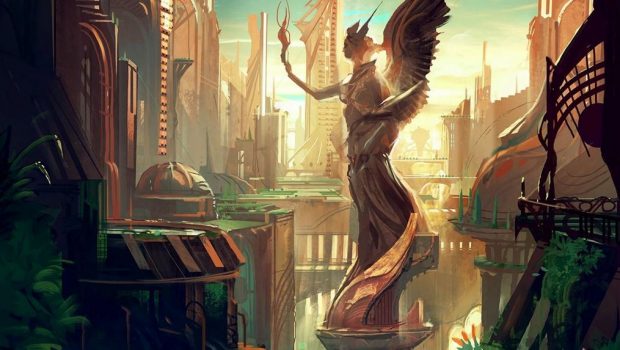 MTG: Enter a metropolis of glamour and grime in Streets of New Capenna

A city built by angels and ruled by demons, New Capenna conceals a crooked underbelly beneath its extravagant parties and classy citizens. Five conniving syndicates feud for control over the supply of “Halo”, a rare resource highly sought after for its material beauty and magic-boosting power. But as the invasion of a bigger threat enters New Capenna, it’s up to Planewalkers Vivien and Elspeth to prevent the conflict between families from boiling into an all-out war.

Players can choose which of the three-colour crime factions they want to join, each led by a mob boss and characterised by a unique mechanic:

The Obscura are gifted magicians who channel their magic for means of deception, using illusions and orchestrating scenarios to manipulate and blackmail their adversaries.

Mechanic: Connive – draw a card and discard a card. If a non-land card is discarded this way, put a +1/+1 counter on the creature that connived.

Kill for the finer things in life

Old-money vampires who are connoisseurs of art, the Maestros are shady assassins disguised among the elite and hell-bent on preserving the culture of Old Capenna.

Mechanic: Casualty – sacrifice a creature with power N or greater to copy any spell tied to this ability.

Reliant on brute force to get the work done, the unmatched craftsmanship skills of the Riveteers make them masters of intimidation and destruction.

Mechanic: Blitz – creatures with blitz can be cast for an alternate cost to gain ‘haste’ and ‘when this creature dies, draw a card’. Sacrifice the creature at the beginning of the next end step.

The Cabaretti are a cult of druids known for throwing the most lavish parties in New Capenna, but their power over the masses reaches far beyond their illustrious dance halls.

Mechanic: Alliance – whenever another creature enters the battlefield, a unique effect is triggered.

While The Brokers seem to handle mundane legal matters and property disputes by day, these dubious solicitors secretly follow a grim doomsday prophecy.

Additionally, “Skyscraper” and “Golden Age” showcase treatments that present the vibrant locations and unique cards of New Capenna in all the glitz and glam of the Plane.

Streets of New Capenna will be available as Draft Boosters, Set Boosters, and Collector Boosters, with factionalised Theme Boosters and Commander Decks for the player’s crime family of choice.

For more information on Streets of New Capenna, visit https://magic.wizards.com/en/products/streets-of-new-capenna or check out the cinematic trailer at https://www.youtube.com/channel/UC8ZGymAvfP97qJabgqUkz4A.