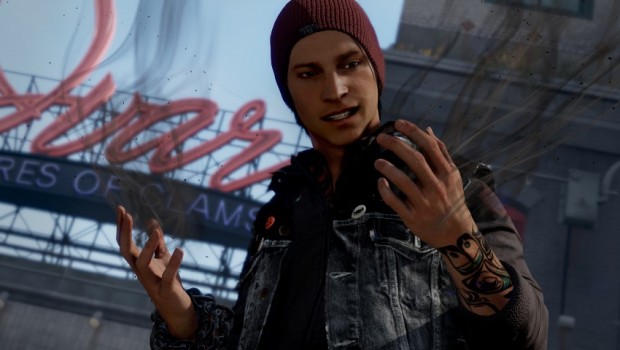 In inFAMOUS: Second Son, players take the role of Delsin Rowe – a superhuman that possesses spectacular powers. Set in Seattle, the city has been recreated with a level of detail never seen before using the amazing speed, graphics processing power, and high resolution output of PS4.

The urban playground tells a big part of the inFAMOUS story; Seattle is under martial law, and the presence of an oppressive police state is visible on every street. The living environment, lighting, and effects create a truly next-gen experience and give inFAMOUS: Second Son the feeling of a living, breathing city that needs Delsin to set it free.

“The launch of PlayStation 4 has been a resounding success here in Australia, and across the globe. We’re now at a stage where PS4 is readily available to all players and with the launch of inFAMOUS: Second Son, there’s now even more reasons to get your hands on one,” said Michael Ephraim, Managing Director, Sony Computer Entertainment Australia.

SCE Aust. has collaborated with a number of Australian sporting legends possessing superpowers of their own, to mark the Australian launch of inFAMOUS: Second Son. Delsin Rowe is brought to life in a stunning video, scaling the urban Sydney skyline to deliver the power of PlayStation 4 to rugby league’s Beau Ryan, rugby union’s Israel Folau, and veteran footballer and pundit Mark Bosnich.

SCE Aust. is also giving three players the chance to win a new PS4 console and a copy of inFAMOUS: Second Son. Information about the competition can be found here. Follow the conversation and get involved by using #DelsinDelivers or by visiting the PlayStation Australia Facebook and Twitter pages.

inFAMOUS: Second Son, only on PS4, is available now in stores nationwide,  with a recommended retail price of AUD$99.95