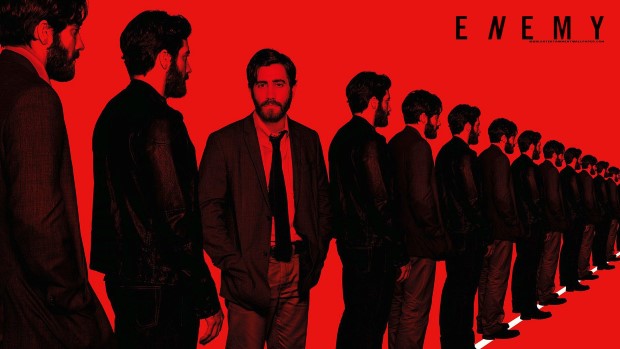 Summary: By no means an easy watch, Enemy will reward those who delve deeper into its disconcerting presentation of a man’s life in turmoil

Prior to working together on the critically acclaimed Prisoners, Director Denis Villeneuve and Jake Gyllenhall also collaborated on Enemy, a deliberately abstruse cinematic experience filled with psychosexual imagery, surreal asides and ambiguous symbolism that will linger in the mind long after the final credits roll, if only for that shocking final shot.

Although marketed as a kind of “Twins swap stations in life and chaos ensues” style film, Enemy actually falls closer in line with the works of David Lynch and Darren Aronofsky, particularly Lost Highway and Black Swan, respectively. 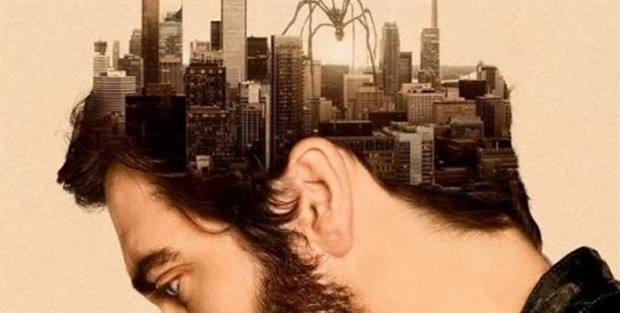 Opening with an unsettling scene in an exclusive gentleman’s club featuring a stripper and a spider upon a silver platter, Enemy introduces us to meek history professor Adam Bell (Jake Gyllenhaal), a reserved man who is painfully aware of the mundane repetitious cycle of his life – The film’s opening shots show Adam reciting the same monologue about totalitarian governments to his disinterested students, grading papers and having passionless sex in his dingy apartment with girlfriend Mary (Mélanie Laurent).

Deciding to watch a film based on the recommendation of a fellow faculty member, the quiet and unassuming Adam finds his life plunged in a surreal and disorienting search for the truth once he sees an actor who appears to be his exact double. 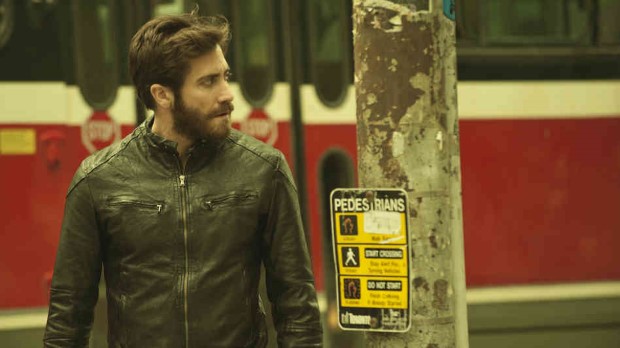 Embarking upon his own investigation Adam discovers that his doppelganger is a C-grade actor named Anthony Clair, a brash and confident rapscallion who is the diametric opposite of Adam, with a pregnant wife (Sarah Gadon) and a strained relationship due to a history of infidelity.

As the doubles are slowly drawn into each other’s lives they find that the act of contacting each other will have immense impact on upon their lives and those of the ones they love, with situations quickly spiralling into a nightmarish descent into a sexually charged and discombobulating existence where nothing is as it seems.

Without spoiling anything, it must be mentioned that Enemy may be near impenetrable upon initial viewings; this is the kind of film that not only rewards multiple screenings but also makes it damn near required. Even then you may find that you’ll have to go online and delve into the myriad of theories regarding the recurring spider motif and other symbolic elements of the film in order to connect the dots into a fully coherent picture. 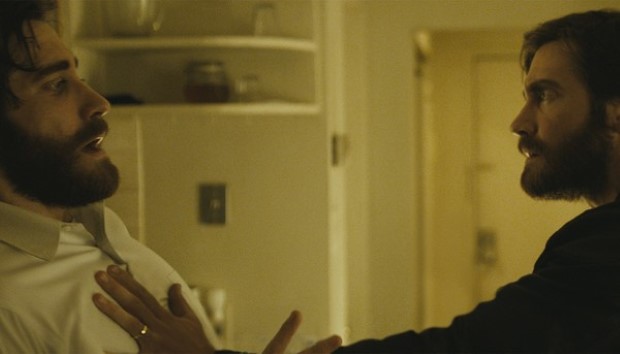 But once you have your own interpretation of the events that transpire onscreen, however, you’ll most likely find that Enemy is one of the more engaging, albeit unsettling, recent releases and well worth your attention.

The film is anchored by Jake Gyllenhaal’s dual performances, with both Adam and Anthony appearing as distinct characters with different physicality and personalities but enough similarities to make the film’s central conceit evident upon further viewing. The surreal imagery and sickly yellowish hue of the image instils the film with a sense of impending dread that steadily escalates throughout Enemy’s 90 minute runtime, and it’s here that Enemy succeeds the most – Atmosphere. 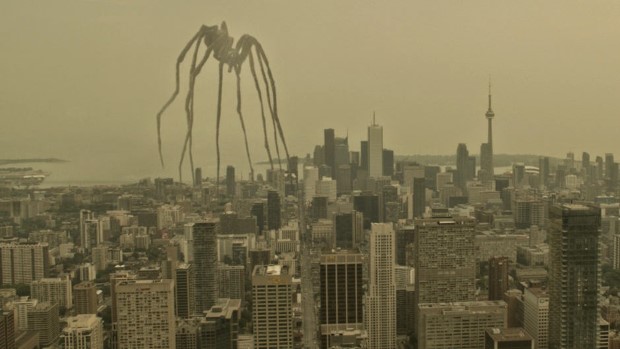 Enemy is presented on Blu-ray with an accomplished AVC encoded 1080p transfer that, whilst sharp, is slightly robbed of certain details due to the sickly yellowish hue that constantly permeates the image, often making scenes appear as if viewed through a foggy camera lens. This is a stylistic choice, however, and bears no reflection upon the quality of the image transfer itself. Free of any signs of aliasing or compression artifacts, the desaturated colours are consistent and black levels solid, if not especially deep; the image competently displays fine detail in close up shots but, again due to the colour grading, the image can appear softer in wider shots. Still, this can’t be really viewed as a negative as the cinematography and stylistic direction only serve to enhance the film’s dreamlike atmosphere.

Audio wise Enemy comes with a lossless DTS-HD 5.1 mix that is subtle and unsettling, effectively using the ambient sounds and sparse score to generate a sensation of unease. Dialogue is always clear and takes advantage of the directionality of a surround sound system with some nice panning effects, although for the most part the track doesn’t opt for flashiness, opting instead to present a solid, centre channel dominant audio experience. 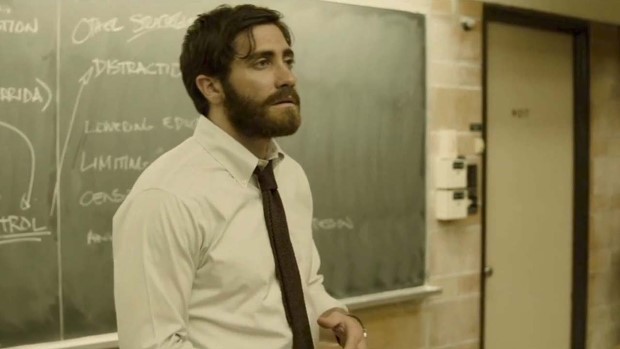 Enemy comes with a series of insightful and revealing interviews from Denis Villeneuve, Jake Gyllenhaal, Mélanie Laurent, Sarah Gadon and Isabella Rossellini, although, again, those looking for some definitive answers to the subtext of the film will come away disappointed. Nonetheless the interviews offer some interesting perspectives and will serve to help viewers decipher certain facets of the storyline that may otherwise remain unclear. Also included is a short trailer for the film and some additional trailers for other Madman releases.

Enemy demands that you navigate a labyrinthine and initially confusing plot replete with ambiguity and surreal imagery in order to decipher the film’s meaning but once you look past the avant-garde leanings and figure out the significance of certain elements it all comes together satisfactorily as a disturbing look into fractured relationships, the desire to be freed of the burden of personal obligation and the struggle to leave behind your past.

By no means an easy watch, Enemy will reward those who delve deeper into its disconcerting presentation of a man’s life in turmoil, but by design the film is enigmatic and open to interpretation, which can serve to frustrate viewers looking for definitive answers.

However, if you’re looking for a mysterious and brooding film experience that questions the concept of identity then Enemy is a provocative and fascinatingly unsettling journey that is well worth your time. 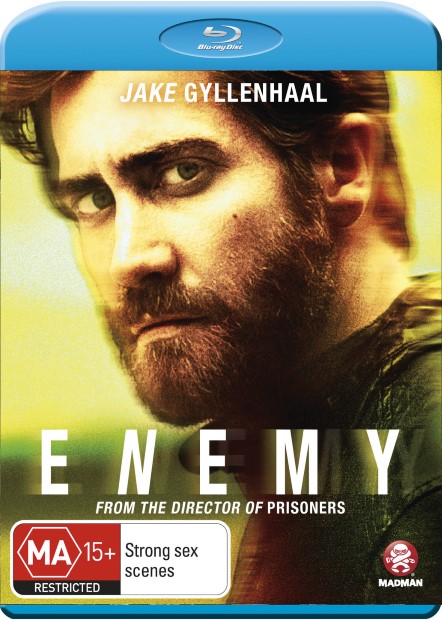