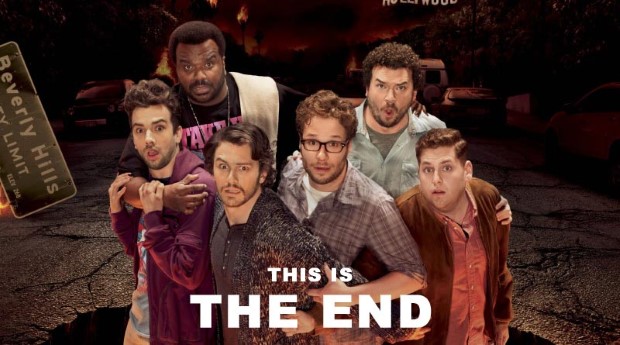 This Is The End Blu-ray Review

Summary: This Is The End will most likely come close to taking the mantle of funniest film of the year, with hilarious self-referential humour, a unique concept and a superb cast all coming together to provide a horror/comedy mash up that nearly reaches the pantheon of classics in the genre like Army of Darkness and Ghostbusters. Recommended.

How much enjoyment you’re likely to get out of This Is The End is dependent on whether or not you’re a fan of the crass comedic styling of Seth Rogen and company; fans will revel in the lowbrow humour and surprisingly effective horrific moments that make up the film but This Is The End is unlikely to convert those who find the schtick of the main cast members tiresome.

Thankfully I’m a fan of most of the actors in this film, Danny McBride and Craig Robinson in particular, and found their self deprecating performances playing exaggerated versions of themselves nicely complemented by what is, in my opinion, one of the stronger screenwriting efforts by Seth Rogen and Evan Goldberg, who also make the leap behind the camera this time around in their directorial debuts. 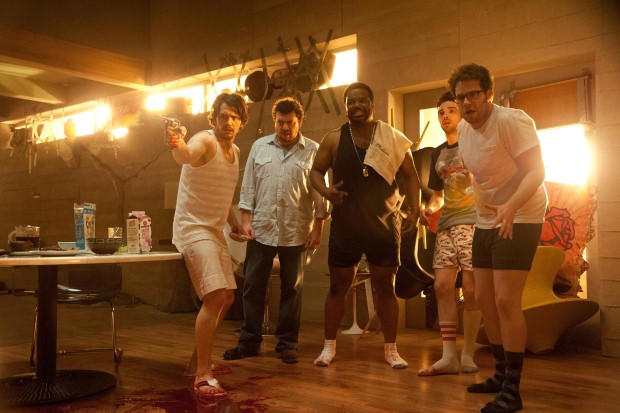 The film opens with Jay Baruchel touching down in Los Angeles to smoke weed and play a marathon session of video games with long time friend Seth Rogen. After much cajoling, Rogen convinces the socially awkward Baruchel to accompany him to a housewarming party at the residence of a certain Mr. James Franco; Baruchel begrudgingly comes along despite not really buying into the whole “Hollywood” scene and, as a result, not really knowing many of the attendees and barely liking those that he is familiar with. Feeling like a third wheel and put off by Franco constantly gushing effusive praise towards Rogen, Baruchel manages to convince his old friend to grab some cigarettes from a corner store… And then the Apocalypse happens.

Righteous souls are collected by blue beams of light as the rapture takes place, leaving those unworthy to enter the Kingdom of Heaven stranded on earth to face the coming of the Antichrist – A category our unassuming protagonists find themselves in. Seeking sanctuary at Franco’s house, most of the party are swallowed up by a sinkhole leading directly to hell, leaving a small group of over privileged actors that also includes a suspiciously over-nice Jonah Hill, Craig Robinson, James Franco and the late addition of Danny McBride (Who, having spent the night passed out in a bathtub, is entirely unaware that the End of Days is upon them) left to defend themselves against the demonic forces intent on destroying what little remains of humanity and the tensions and squabbling that inevitably arise when so many major egos are forced to coexist in such a small area. 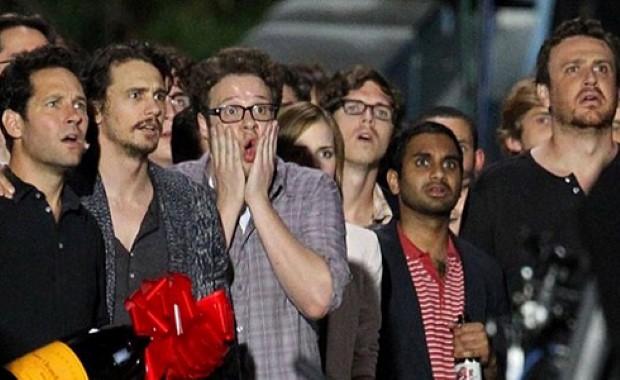 This Is The End combines the horror elements of the film with the meta-comedy quite admirably, with each actor bringing their own unique talents to the film and is littered with cameos from stars like Rihanna, Paul Rudd, Aziz Ansari, Martin Starr, Emma Watson and Jason Segel ; probably the most hilarious cameo, however, goes to Michael Cera, playing against type as a cocaine addled sexual deviant. The efforts of the core cast go some way to lending the film its hyper-kinetic energy; the gags fly thick and fast and, as is to be expected, not all of them quite stick but for the most part each scene offers at least one genuine belly laugh. The film is a raunchy celebration of vulgar humour but also has genuine heart buried beneath the quips and dick jokes, with the friendship of Baruchel and Rogen underpinning events; the widening chasm between friends due to different interests and lifestyles is a concept we can all relate to on some level and the film handles this conceit admirably. 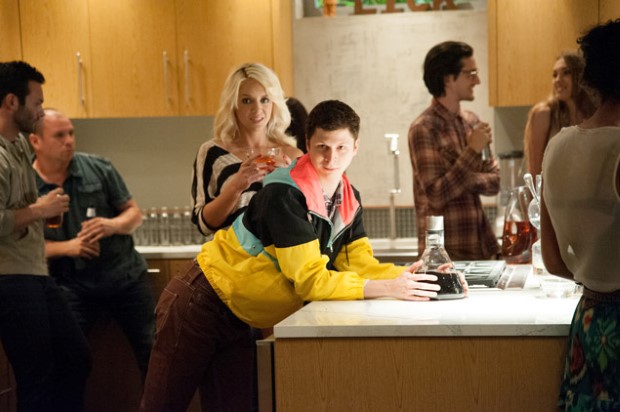 There are a few misfires, most notably the completely out of place performance by the Backstreet Boys, but for the most part This Is The End fires on all cylinders. Fans will get a kick out of the knowing nods towards the careers of its stars and the group dynamic that holds the entire film together, with its cast unafraid of sending up public perceptions of their lifestyles and gleefully taking potshots at each others careers, amongst other things. Rogen and Goldberg’s direction is competent and self assured, with their history with the cast ensuring that they wring out the best performances they can; the entire film feels like an excuse for all of these great comedic minds to just get together and run amok and it’s all the better for it. 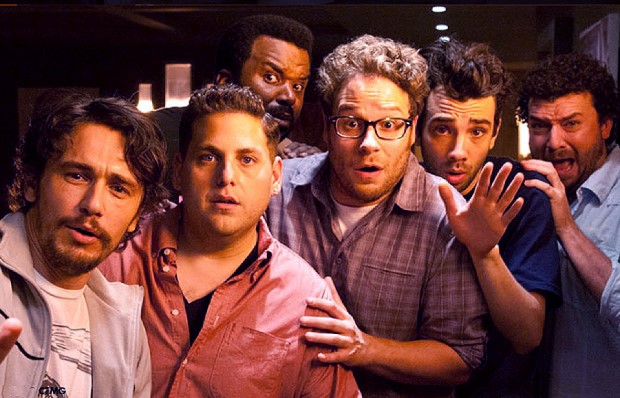 This Is The End’s print was mastered in 4k and, as a result, looks absolutely stunning when outputted to 1080p. Sony’s transfer is crisp and fine detail is clearly defined, with naturalistic colours and a stable image. There is some evidence of banding here and there and some visible noise in the darker scenes but for the most part this is an extremely competent transfer. The main issue with the image is that, due to the film’s setting, it never really gets a chance to shine; even the outdoor sequences are dreary and swathed in darkness, with the colour palette generally reduced to a series of deep reds and blacks. Nonetheless, this has more to do with the stylised direction rather than the transfer, which deserves top marks.

The sound is presented by a DTS-HD Master Audio 5.1 lossless soundtrack that is fully immersive when used in conjunction with a suitable surround sound set up. Clarity is as great as expected and the dialogue is presented with razor fine precision; there’s no crossing over of channels or audible bleed through and both the score and incidental effects are complemented by a robust and powerful soundtrack that perfectly accentuates the pandemonium unfolding onscreen. Overall, another superb transfer by Sony. 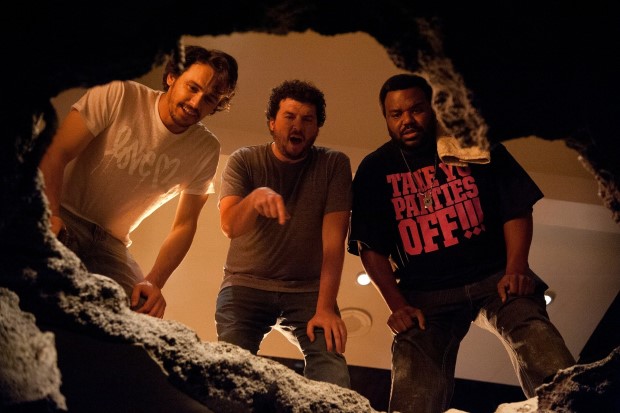 This Is The End’s Blu-ray release comes replete with a selection of great extras, from an affable commentary track featuring Rogen and Goldberg to featurettes focusing on the marketing of the film, the experience of directing so many close friends during the production, a look behind the scenes directing the trailer for Pineapple Express 2 and heaps more. All up there’s about 90 minutes of extra material to digest and fans will love the conversation between McBride and guest star Channing Tatum, the revealing look at Michael Cera’s involvement and the addition of the original short film that inspired the whole shebang, “Jay and Seth Vs. The Apocalypse“.

The short film is an interesting addition as it shows the evolution of the film’s concept from the kernel of an idea presented in the short to the final product, especially as tonally the short presents a much darker and bleak interpretation of surviving the apocalypse. There’s also a selection of deleted scenes and a gag reel that, whilst amusing, are a slight letdown due to the amount of film left on the cutting room floor hinted at during the commentary track and the improvisational skills of the cast. This Is The End also comes with an Ultraviolet copy of the film. 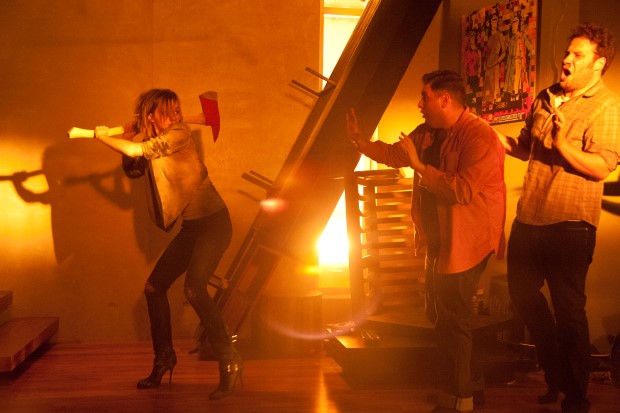 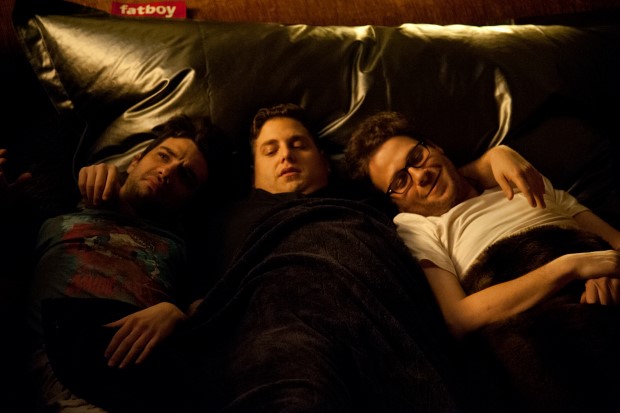 This Is The End will undoubtedly be a divisive movie, particularly with its religious overtones and liberal use of crude and puerile humour. The weight of the film rests squarely on the shoulders of its ensemble cast and if arguments about indiscriminate ejaculation, anilingus, depictions of demon dongs and quick cut psychedelic drug scenes aren’t your cup of tea then you’ll find little to enjoy here. On the other hand, if you do count yourself amongst the target audience (As I do) then This Is The End will most likely come close to taking the mantle of funniest film of the year, with hilarious self-referential humour, a unique concept and a superb cast all coming together to provide a horror/comedy mash up that nearly reaches the pantheon of classics in the genre like Army of Darkness and Ghostbusters. Recommended.