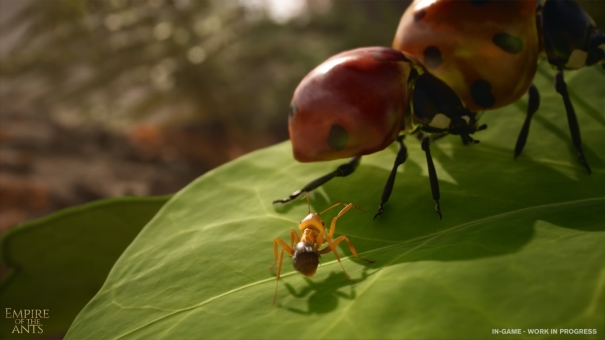 Empire of the ants, the video game based on the Bernard Werber’s best seller novel, unveils itself

Microids is delighted to unveil the first images for the video game Empire of the Ants, based on the Bernard Werber’s eponymous best-seller.

Developed by the French studio Tower Five with Unreal Engine 5, the video game Empire of the Ants will offer a strategic experience close to the book series. Players will dive into the universe of the ants to live an epic adventure where they will have to help a colony prosper through tactical and strategical battles, in a microscopic world of epic proportions. Exploration, strategy planning, combat skills, but most of all, setting up local wildlife alliances will be necessary in order to emerge victorious from the many challenges awaiting.

«TAKE PART TO THE EXODUS FROM THE DOOMED AND LOST COLONY»

Bernard Werber’s novel has captivated millions of readers with its fascinating universe and its reflections on human nature. We are very proud to offer gamers the opportunity to discover this universe from a new perspective, through this video game adaptation.

About Empire of the Ants:

Internationally known for his trilogy Empire of the Ants, The Thanatonauts and more recently The Prophecy of Bees (2021), Bernard Werber has just released his new novel The Diagonal of the Queens.