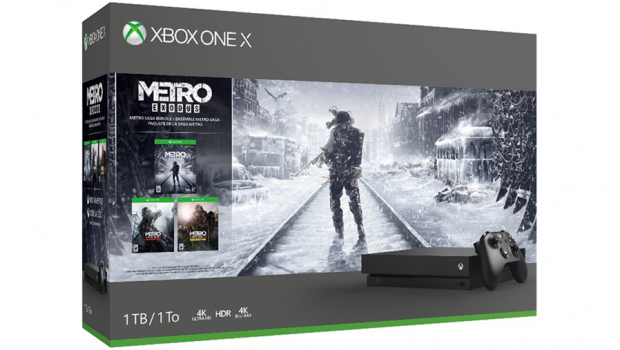 The post-apocalyptic saga that began with Metro 2033 and continued into Metro: Last Light returns to Xbox One this February in Metro Exodus. Debuting today, the story trailer for Metro Exodus teases what’s ahead as you flee the shattered ruins of dead Moscow and embark on an epic, continent-spanning journey to shoot, sneak, and survive in a hostile world.

To equip players for an immersive experience as they trek across the ravaged Russian landscape, we’re announcing the Xbox One X Metro Saga Bundle, which includes full-game downloads of Metro 2033 Redux, Metro: Last Light Redux and Metro Exodus, so you can jump into the haunting tale of humanity’s survival from the very beginning. Enhanced for Xbox One X in 4K Ultra HD and with HDR support, Metro Exodus will take players on a journey through vast sandbox levels packed with apocalyptic creatures across four beautiful but hostile seasons.

Along with full-game downloads of the entire Metro saga, the Xbox One X Metro Saga Bundle includes an Xbox One X console with a 1TB hard drive, an Xbox Wireless Controller and 1-month trials to Xbox Game Pass and Xbox Live Gold.

Embark on the ultimate post-apocalyptic gaming destination when the Xbox One X Metro Saga Bundle arrives on February 15, or pre-order today for AUD$649 / NZD$749 at Microsoft Store or participating retailers.

As part of the Xbox One family of devices, you’ll get access to the only console system that plays the best games of the past, present, and future with more than 1,300 games available today, including over 200 exclusives and over 400 Xbox classics. With the Xbox One X Metro Saga Bundle, you’ll also have features like a built-in 4K UHD Blu-ray player, 4K streaming with High Dynamic Range and Dolby Vision, premium audio with Dolby Atmos and DTS:X support and services unique to the Xbox platform like Xbox Game Pass, Xbox Live and Xbox One Backward Compatibility at your fingertips, making Xbox One the best place to play.

For more information on Xbox One or the Metro saga, visit xbox.com or Microsoft Store, near you or online.