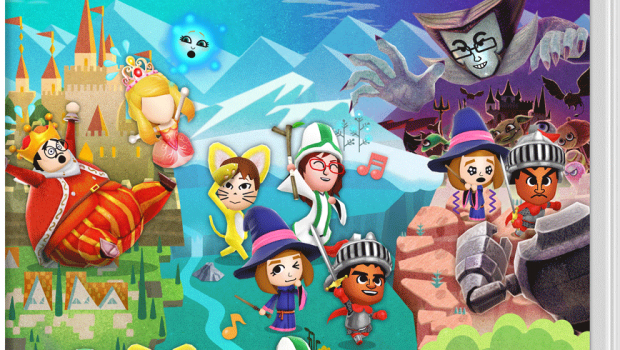 EMBARK ON A HILARIOUS CUSTOMISABLE ADVENTURE IN MIITOPIA, LAUNCHING ON NINTENDO SWITCH TODAY

Players can experience a whacky and whimsical adventure when Miitopia launches today on Nintendo Switch. Journey through a vast world battling enemies on a mission to rescue faces stolen by the villainous Dark Lord. Players can create and cast whoever they want in the starring roles – from the courageous party joining the expedition, to the big baddie, the Dark Lord himself.

It is important to rest at the inn after defeating fearsome foes and nurture the bonds between Mii characters. If party members are placed together, their friendship will evolve. Mii characters can be sent on outings to the café, cinema, and more. No two friendships will be the same! Expect hilarious interactions, random exchanges, and out-of-the-blue situations that will make the adventure unique.

The party is completed by a trusty horse companion. If players spend time with their new friend, it’ll reward them with its loyalty. The horse will lend a helping hoof in battle and will always stand by their side.

Mii characters can be created and added to the game through the Nintendo Switch Mii creator –and it is possible to borrow a colourful cast from friends*. In Miitopia, players now also have more customisation choices to make Mii characters look more fabulous than ever – with glamorous wigs, colourful hairstyles, and battle-ready makeup.

A free demo of Miitopia is available for everyone who wants to get a taste of this comedy-filled, fantasy adventure. It is possible to transfer the save data from the demo over to the full version of the game, so players are able to seamlessly continue their adventure.

In Miitopia, launching today on Nintendo Switch, players can create their own Mii characters and set out on a light-hearted adventure to defeat the evil Dark Lord. With the new makeup and wig features in Miitopia, Mii characters are even more customizable. Strengthening the relationships between them is key and it is even possible to befriend a horse.