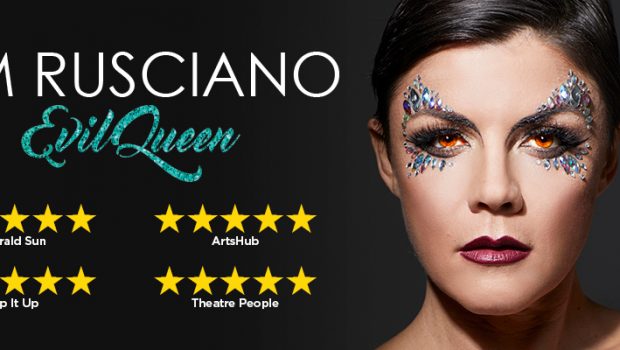 Em Rusciano ‘The Evil Queen Tour’ Touring Across Australia in 2018!

Frontier Comedy and the Hit Network are thrilled to announce that singer, writer, broadcaster, comedian and “the poster girl for telling it like it is” (Perth Culture) Em Rusciano will be taking her new live comedy show Evil Queen across the country from February through April next year, for her largest live performances to date after her last two tours completely sold out!

Forget Snow White, STFU Ariel… for young Em Rusciano it was always about the villainesses. Her childhood obsession with these betrayed, depressive, fabulously dressed women turned out to be excellent preparation for both her marriage and her career in radio. Now, as Em hits the stage after a year of giddy highs and grinding lows… the time has come for her to unleash this inner evil queen. So be prepared, you poor unfortunate souls, for black glitter, white wine, spells, songs, unhealthy obsessions and high-end bitching.

The host of Sydney’s 2DayFM breakfast show The Em Rusciano Radio Show with Harley Breen, which also airs nationally from 7-8pm weekdays on the Hit Network and often reaches #1 on the iTunes charts with its catch-up podcast, is one of the most well-rounded and talented performers in Australia. In the last 24 months Em has released her debut single Versions Of Me (Liberation Music) which peaked at #10 on the iTunes charts, published a bestselling memoir Try Hard – Tales From The Life of a Needy Overachiever (Simon & Schuster Australia) and performed across the country to critical acclaim and sold out crowds on the Em Rusciano Is Not A Diva tour (2016) and The Try Hard Tour (2016-2017.)

Em’s phenomenal voice has been well-known to Australian audiences since she was a top ten contestant on Australian Idol in 2004. In the years since, Em has built a solid foundation for herself as a stand-up comedian, radio presenter, published author and powerhouse live performer.

Pedestrian.TV’s 2014 ‘Blogger Of The Year’ Em’s first book Try Hard received glowing reviews from critics and fans alike, went to the top of the iBook autobiography charts, earned her a nomination as one of Booktopia’s Top 50 Australian Authors and was reprinted due to overwhelming pre-sale demand – before it had even been officially released! Next month, fans will be treated to three fabulous new chapters of the laugh-out-loud, cry-out-loud bestseller, due for release on 1 November.

Don’t miss Em Rusciano performing her biggest shows to date across the country next year. Her last two tours completely sold out, so make sure you get in early for tickets to see this “irrepressible force of nature” (Rip It Up) live! Tickets are on sale Monday 6 November – don’t miss out!