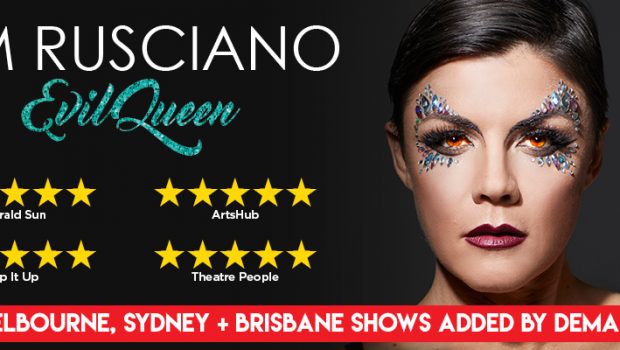 Frontier Comedy and the Hit Network are  pleased to announce that due to overwhelming demand, second Melbourne, Sydney and Brisbane shows have been added to Em Rusciano’s upcoming Evil Queen tour. Tickets to the additional shows in Melbourne (Fri 16 Feb at Palais Theatre), Sydney (Fri 13 Apr at State Theatre) and Brisbane (Fri 20 Apr at Queensland Performing Arts Centre) will be on sale at 9am local time today.

Existing Perth ticketholders will be contacted and moved across to the new show date. Those unable to attend the new show are asked to secure a refund from the show’s authorised ticketing agency Ticketek by Wednesday 6 December. Frontier Comedy and the Hit Network sincerely apologise to all those affected by this change.

In the last 24 months Em, the host of Sydney’s 2DayFM breakfast show The Em Rusciano Radio Show with Harley Breen (which also airs nationally from 7-8pm weekdays on the Hit Network and often reaches #1 on the iTunes charts with its catch-up podcast), has released her debut single Versions Of Me (Liberation Music) which peaked at #10 on the iTunes charts, published a bestselling memoir Try Hard – Tales From The Life of a Needy Overachiever (Simon & Schuster Australia) and performed across the country to critical acclaim and sold out crowds on the Em Rusciano Is Not A Diva tour (2016) and The Try Hard Tour (2016-2017.)

Now, Em is bringing her highly-anticipated, brand-new live show to adoring audiences across Australia for her biggest shows to date. Be prepared for black glitter, white wine, spells, songs, unhealthy obsessions and high-end bitching. Em’s last two tours completely sold out, so make sure you get in early for tickets to see this “irrepressible force of nature” (Rip It Up) live!