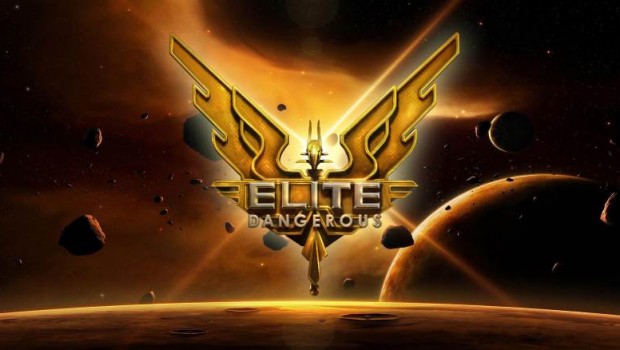 Summary: Elite Dangerous successfully takes the original game and turns it into a true 21st century revolution as you explore the furthermost reaches of the universe

Elite launched a gaming institution in 1984 which allowed gamers to explore the galaxy in glorious 3D wire-frame graphics as they traded, battled and attempted to either bring order or chaos to their personal universe. As players commenced their career as the commander of a Cobra Mark III with 100 credits to their name, Elite gave the player full control over their destiny as they were given the choice of a variety of missions from trading to bounty hunting as they traversed the galaxy searching for fortune and glory. Even though there have been a few incarnations of Elite since the original 1984 game, none has come as close to replicating this immersive feeling since now. 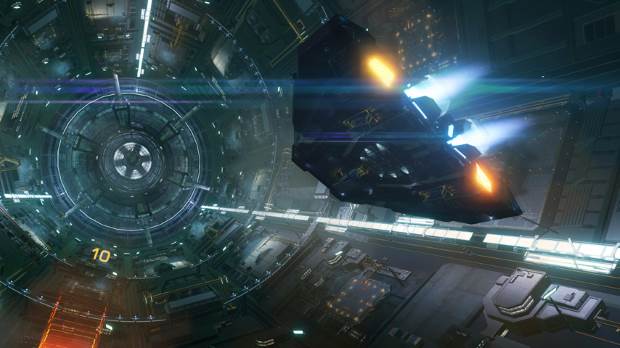 Welcome to Elite Dangerous, the next instalment of the Elite franchise that successfully combines space exploration, MMO and stunning next-generation graphics to create a truly engaging game on the PC that is as close as us mere mortals will probably get to visiting space itself. However there is a word of warning that comes with Elite Dangerous that include a relatively steep learning curve that thankfully is addressed via a handful of tutorials and then you have the time factor. Elite Dangerous boasts 400 billion star systems and one hundred and fifty thousand of them are actually based on real-world astronomical data from the Milky Way. So yes, Elite Dangerous is a very time consuming game, however the scope is quite unparalleled to any other game that we’ve played. 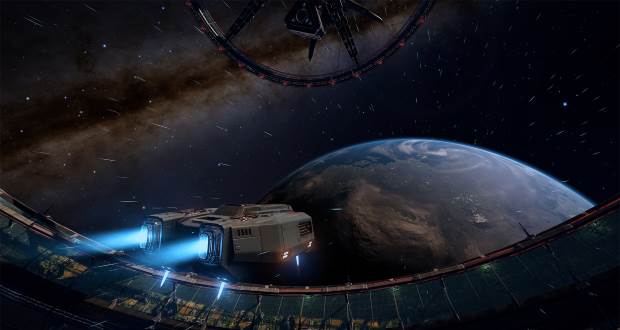 The game is also set in the same universe of the original with the year being 3300 and like Elite, players are once again given a handful of credits and a basic ship called the Sidewinder in order to start their career in this diverse gaming universe. From there, players can then shape their destinies as they explore the universe, upgrade their ships and more importantly bring those credits in for either heroic and nefarious purposes. That’s also one of the main reasons why the original game was as compelling as it gave the player some unprecedented choice which is mimicked in Elite Dangerous as you can tailor your space experience. But the biggest difference of Elite Dangerous is the MMO factor that allows players to form either friendships or enemies in their aim to tame the savage universe. Lone wolf players can also keep to themselves but the universe is a very dangerous place, especially while exploring by yourself. 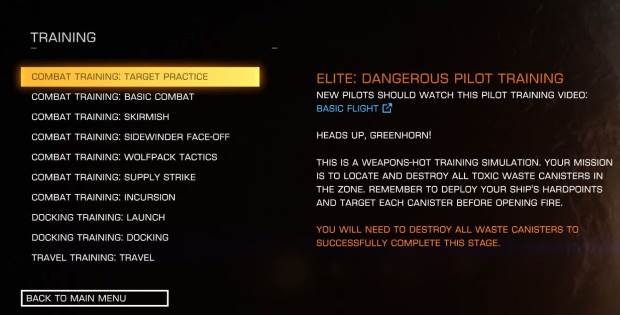 So before jumping into your Siderwinder, you first need to learn the mechanics of the game and the tutorials created by the developers give you enough knowledge to fly this spacecraft. However not all aspects of controls are touched in these tutorials but if you persist, Elite Dangerous does become quite a rewarding experience due to the scope of this massive gaming universe. With that said, I did try the keyboard / mouse combo, a Razer gamepad and a flight-stick. My preference was the gamepad but the flight-stick definitely increases the realism factor but did feel a little clunky due to my console gaming. 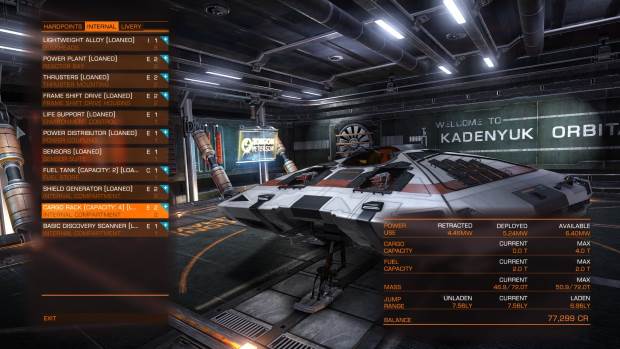 Another great element of Elite Dangerous in terms of start-up is that the game doesn’t throw you into the deep end too far, although there is an option for those more risky players to tackle this path. Rather, by engaging in trading missions and then moving to bounty hunting, it allows for the player to become familiar with the gaming mechanics which in turn brings in the credits that in turn allows you to purchase additional ships and upgrades. Upgrading is dependent on how you want to play, whether you want your ship to carry more cargo or you need a faster ship with more weaponry to bring down those dastardly space pirates, it’s all up to the player. There’s also quite a bit of political intrigue and turmoil throughout the galaxy that include corporations, federations and alliances.

In terms of combat, the game is called Elite Dangerous for a reason and while you might be minding your own business in the vastness of space, there are plenty of enemy players who want to increase their kill scores and steal your precious cargo. Furthermore, the game does not boast a permadeath feature per se but if you lose a battle in the coldness of space, your ship is gone and you basically need to start again. However if you have saved enough credits from previous missions, this makes the pain considerably less but nonetheless it’s a huge risk when you start exploring those systems away from protected spaceports. Another great nod of the hat to the original is that if you prepare your weapons near a spaceport, you are fined and if you decide to attack in this area, you’re insolence will be addressed by the local authorities. 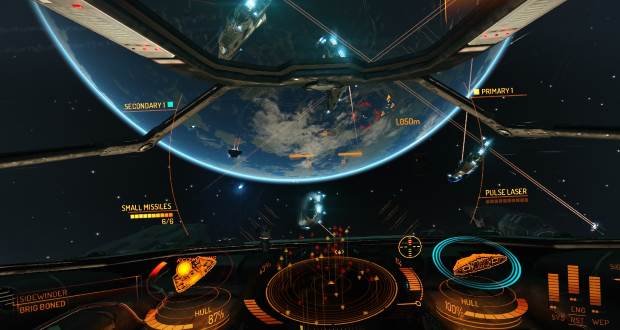 Battling other NPC’s and players is a joy in Elite Dangerous, especially when you start upgrading your ship as you get involved in this dog-fighting dance or life and death, hoping that the other player makes a mistake first as lasers, bullets and missiles are fired. Thankfully you have a shield because more often than not, there is someone a little bigger and more powerful than you and I’ve managed to slink off on more than one occasion to lick my wounds. 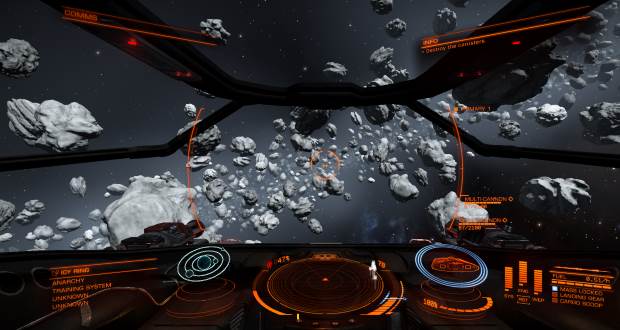 Although Elite Dangerous works very well as a solo game, joining up with other players is great to create your own possess for hunting down those more dangerous bounties or systems under pirate control. I also enjoyed the scanning of various ships as you search for your bounties and then engage with them to score your credits that range from just a couple of hundred to several thousands, depending on how much is on their heads. All in all, the gameplay is quite sturdy on the PC as you explore the Milky Way, alone, with others and also enemies just lurking around the dark side of planets. 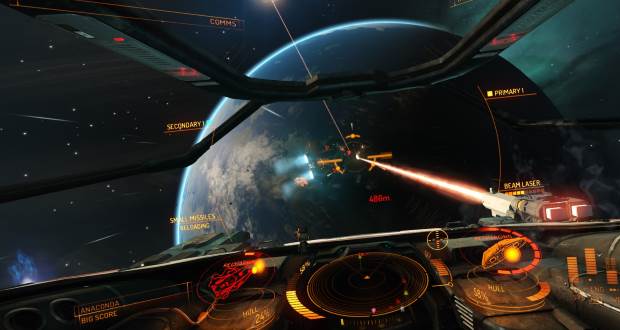 Graphically, Elite Dangerous is a gorgeous looking game on the PC that really needs to be played on a large monitor or even better, a 50″ TV. You get this real sense of space plus scope as you explore this universe and if you want to go one step further, the game does support the Oculus Rift DK2 which really takes your breath away. Although we have a DK2 in the office, whenever I wasn’t using this VR headset during Elite Dangerous, I became quite disappointed because it’s the most immersive gaming experience on this unit to date. It’s like you part of some Hollywood sci-fi film but you’re the star. This also means you can look around the cockpit and actually feel like you are part of the Elite Dangerous game which really enhances the overall gaming experience and seeing a white gas giant for the first time up close and personal is friggin amazing! 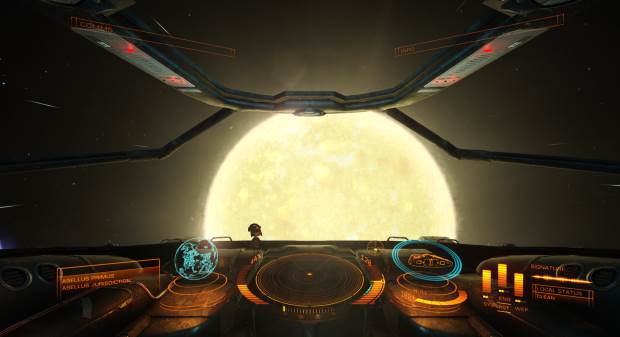 It’s really one of those gaming “wow” moments and I sincerely hope we’ll see a commercial Oculus Rift released this year. The galaxy, stars, planets, asteroids and all sorts of things that you would expect to see in space are quite realistic as are the various ships that you encounter plus those great explosion. There are a couple of “basic” graphics here and there but for the most part, the game looks visually stunning on both a monitor and TV that goes to a whole new level with a VR headset. Given that, audio does play a back role compared to the graphics but the sound design is still quite impressive and works well with both the gameplay and the visuals. The game is also silky smooth at 60 frames per second on the PC.

Elite Dangerous successfully takes the original game and turns it into a true 21st century revolution as you explore the furthermost reaches of the universe as you attempt assassinations, protect spaceports and search for those illusive credits in order to better yourself in this gaming world. The learning curve is a little steep and the controls can be at times fiddle some but overall, the developers of Elite Dangerous should be commended on creating a truly visual, immersive and memorable experience on the PC that not only pays homage to the original but takes it to a new level thanks to the MMO component and inclusion of the Oculus Rift DK2. 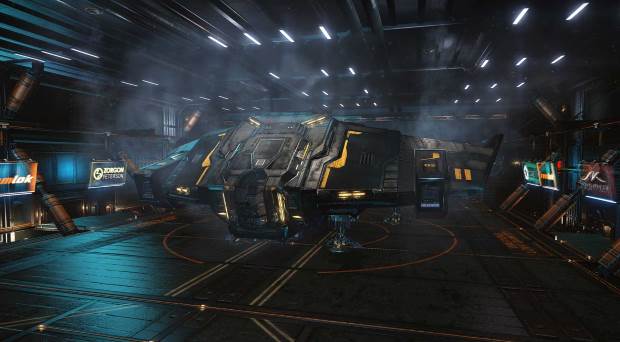