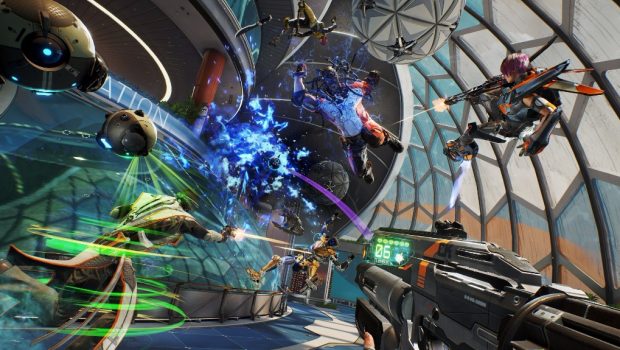 Nexon America also announced today there are two editions now available for pre-order for both PS4™ and PC – the Core Edition for USD $29.99 and the Deadzo Deluxe Edition for USD $39.99 featuring a variety of exclusive in game content. Pre-order now and receive additional, exclusive in-game character skins. Visit www.lawbreakers.com for more details.

For those attending the Electronic Entertainment Expo (E3) this week, Boss Key Productions is unleashing LawBreakers to attendees, offering the chance to get a hands-on experience with the game’s unprecedented vertical combat on PC, and for the first time on PS4™. Those at home can get a look at new reveals during E3, featuring the new Harrier Role, a support laser-specialist with beam-powered boots, and Vertigo, a suborbital station where high-flying skill reigns supreme.

Fans not attending E3 will have the opportunity to experience LawBreakers in the coming weeks during the game’s ‘Rise Up’ PC Beta event. Starting June 28th all key-holding Beta participants get a head start in the next Beta test, then on June 30th until July 3rd LawBreakers goes open beta for the very first time on PC. Register at www.lawbreakers.com.

LawBreakers is a multiplayer FPS in which the laws of physics are shattered, creating intense gravity-based combat across an alternate futuristic landscape. Players choose whether to fight to uphold the “Law” or go out for blood as a “Breaker,” as they take part in a conflict raging across iconic locations including the boiling oceans off the Santa Monica coastline to a gravity-ravaged Grand Canyon.

LawBreakers (rated M) is set to launch simultaneously on PlayStation®4 and Steam at a starting price point of just USD $29.99 for the Core Edition and USD $39.99 for the Deadzo Deluxe Edition. All future content updates are included.