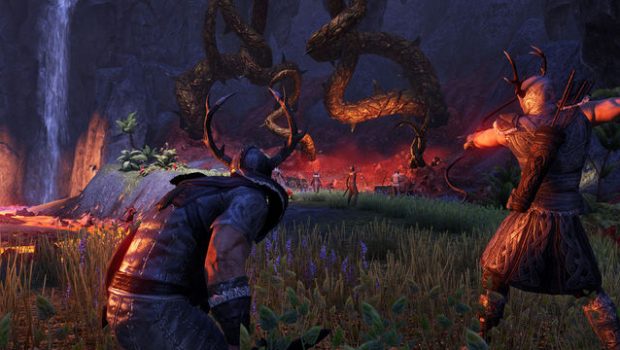 Today marks the release of the first DLC for The Elder Scrolls Online since the launch of the ESO: Morrowind Chapter in June. The Horns of the Reach DLC game pack introduces two new incredible dungeons – Falkreath Hold and Bloodroot Forge – in addition to a slew of new items.

Launching alongside Horns of the Reach are a host of improvements to the base game available to all players for free, as well as a new PvP Battlegrounds mode, Chaosball, and a new map, Arcane University.

The Horns of the Reach two-dungeon pack is now available on PC and Mac, free for all ESO Plus Members, or for purchase via the in-game Crown Store for 1,500 Crowns. Update 15 general improvements are available free for all players, while Battlegrounds additions are free for owners of ESO: Morrowind (Battlegrounds requires ESO: Morrowind). Both will also release for PlayStation 4 and Xbox One adventurers on August 29.

Horns of the Reach is also available in a special Collector’s Bundle, which offers a unique selection Horns of the Reach-themed items in addition to the DLC game pack, including the Karthwolf Charger mount, Karthwolf Shepherd pet, and five Crown Experience Scrolls. This exclusive bundle is available for a limited time in the Crown Store for 3,500 crowns.

Alongside Horns of the Reach, ZeniMax Online Studios has also released Update 15 for PC and Mac, delivering a host of overall game improvements that are free for everyone, as well as major additions to ESO’s fast-moving new Battlegrounds PvP, which are free for all owners of ESO: Morrowind.

Battlegrounds additions include a new arena – Arcane University, set in the heart of Cyrodiil’s ruined university – as well as a new game mode, Chaosball, in which players must capture and protect a “ball” to earn points for their team. For more information, please see the ESO web site’s Battlegrounds preview.

Update 15’s general game updates — free for all players — includes fixes, balance changes, additions, and improvements that everybody can enjoy. For a complete list of changes and additions, please see the base game update preview on the ESO web site.