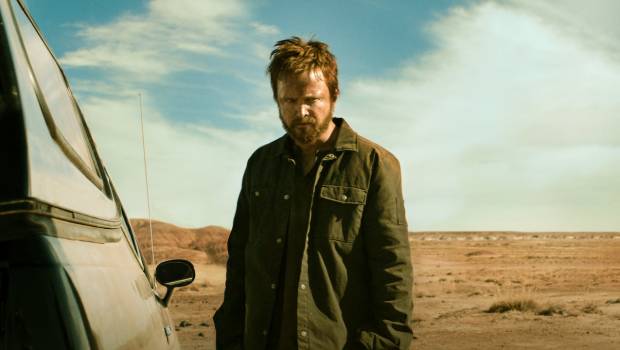 Contains spoilers for the film and Breaking Bad

Additional time is also spent with one of the show’s side characters and underlines their disturbed psychology. Without featuring some of the series’ major players, gaps in the chemistry and personal dynamics were inevitable. Yet seven years after the show ended, the film is a memorable epilogue due to how it uses contained spaces to create meaning and how it explores questions relating to personal trauma and the banality of criminal life.

El Camino opens with a poignant flashback shared between Jesse and Mike (Jonathan Banks). It is the same river where Mike will later die. The film then cuts to the end of Breaking Bad. Jesse roars off in his car having escaped the cell of a Neo-Nazi meth lab. The abuse he endured has left him dishevelled, tired, and broken. He is desperate to escape the police who are fast approaching the lab. He seeks shelter from old friends, the humorous junky pair named Badger (Matt Jones) and Skinny Pete (Charles Baker).

Jesse is visibly tortured, and his behaviour is deeply erratic. Soon the trio swap cars, which allows Jesse to evade the law. However, he needs money to reach a contact who can provide him with a new identity. He returns to an apartment block to find a large sum of cash hidden inside. In flashback, we learn that he was previously brought to this building by Todd (Game Night’s Jesse Plemons) when he was his prisoner. Todd is the creepy, diligent nephew of a Neo-Nazi who captured Jesse and forced him to cook methamphetamine.

While Breaking Bad envisioned choices and dire consequences, El Camino is concerned with how the past haunts people. In the opening scene, Jesse says he would like to move to Alaska and ‘put things right’. Yet Mike corrects him and says, ‘that’s the one thing you could never do’. His words suggest that people’s actions, choices, and experiences are irreversible. The irony is chilling because this is where he will later die. The exchange between the two men echoes throughout every scene and continues to dramatise Jesse’s psychological trauma.

His reunion with Badger and Skinny Pete is interrupted by disturbing memory triggers. When Jesse showers, Gilligan employs quick cuts to show his tortured memories. We see glimpses of the Neo-Nazis hosing Jesse down and laughing at him. There are also deep scars on his back and face. Later, he is affected by the memories of the same Neo-Nazi thugs chaining him up and swinging his body back and forth in an act of torture. The intercuts and memories underline how the past continues to haunt people and defines their present actions. 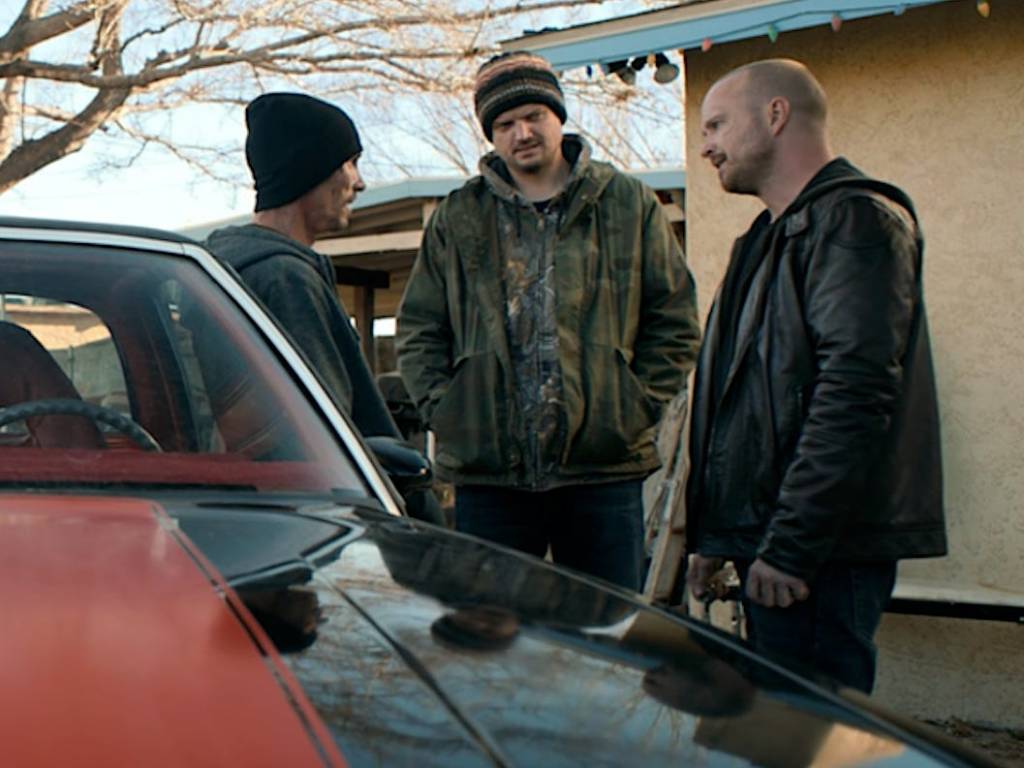 One psychological idea that El Camino challenges is mundanity in the criminal world. The most vivid example is when Jesse is taken to Todd’s apartment. Gilligan uses cross-cutting to juxtapose two timelines within the same room. The contrast between when Jesse is a prisoner and when he is searching for the money reveals a third element: the impossibility of criminals living ordinary lives, free from trauma and oppression. This idea is embodied through Jesse’s traumatic memories and Todd, one of Gilligan’s most disturbing figures. He is a softly spoken, diligent young man whose indifference to his violent actions results from loyalty to his employer.

Gilligan finds black humour through the banality of this disturbing sequence. Jesse reels when Todd takes him inside his apartment because he sees the body of a housekeeper on the floor. Jesse asks if he murdered her because she was stealing. He says it was merely because she found his money in an encyclopedia. As they roll up the woman in a rug, Todd retrieves his belt and ties it around his pants. Then as they bury her body in the desert, Todd comments on her excellence as a housekeeper and that he will buy Jesse pizza if he hands him his gun.

The humour builds characterisation, reflecting how Todd’s banal comments and observations emotionally detach him from the gravity of his actions and violent situations. The characterisation echoes Walt’s duality where he said he acted out of love for his family, but his criminal actions made an ordinary, banal life impossible. 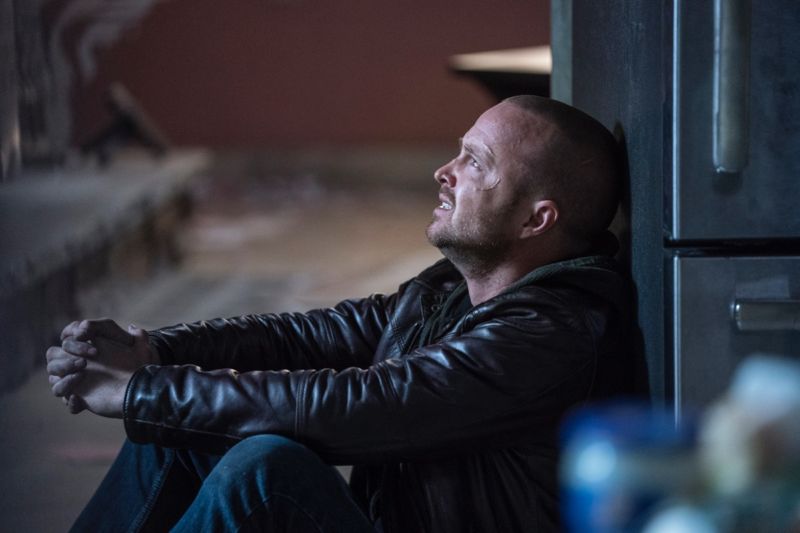 Another pivotal idea borrowed from Breaking Bad is contained spaces showing people trapped by their economic circumstances and personal choices. The inside of Walt’s RV, the desk at the car wash, the car Hank was trapped in, and the space under Walt’s house, were examples of these types of interiors. Contained spaces in El Camino continue to reflect people trapped by their actions and traumas.

In one tightly framed shot, Jesse struggles to open the door of Todd’s apartment, which is buried beneath police tape. It is acutely shot so that we see the landlord approaching. The moment reflects a tense physical struggle but also Jesse’s resistance to revisit his chilling memories of Todd. Another narrow space is the back of the truck where Jesse lies next to the body. The image reflects his imprisonment and his guilt about helping Todd.

The apartment’s closed spatiality and the hidden money reflect Jesse’s struggle to escape the past. The way he tears the room apart mirrors how a junkie might search obsessively for a fix. The physical containment includes finding the money hidden inside a fridge, peeking around corners to evade two incoming cops, and then being pinned on the floor. The past haunts the present when he realises that the men are not only fake cops, but one is the welder who helped the Neo-Nazi chain him up. Jesse’s escape from the apartment and its past traumas changes the trajectory of the story from a traumatic struggle to a revenge mission that mimics a western film. 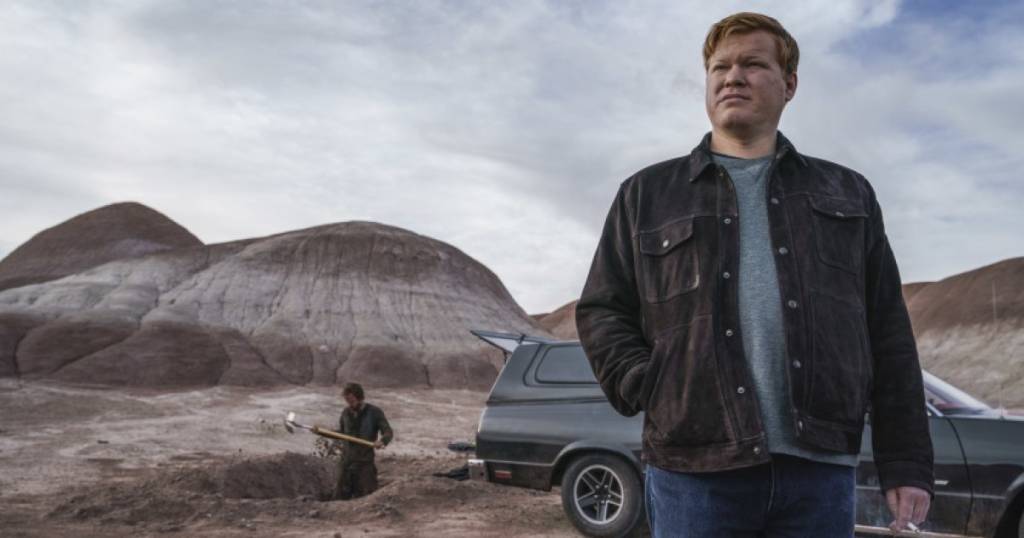 Thematically, money is as pivotal as it was in the series in underlining the complex rules of criminality. The film’s best scene sees Jesse enter a vacuum cleaner store where he talks to Ed (Robert Forster) about helping him disappear with a new identity. In another example of the past haunting the present, Ed denies any knowledge of this process. In one of the television episodes, Jesse employed Ed’s services but walked away at the last minute. He must now pay for the identity he failed to use and the new one. It is a costly decision, but he spends all the money that he took from the fridge and the money the junkies gave him.

However, he is stunned by Ed’s pettiness when he is told he is $1,800 short. It is all that stands between him starting a new life. In Gilligan’s universe, money is instrumental in maintaining the criminal world’s delicate equilibrium. It compares to the precise measurements of a science experiment. The moment recalls various scenes where Walt would collect millions in drug money but obsess over being slightly short. To these characters, money and its power is as addictive as any drug. It reinforces a delicately poised social hierarchy forged by criminals. In Ed’s case, he wants the precise amount because Jesse previously wasted his time and resources.

The argument showcases Gilligan’s penchant for writing great dialogue and allowing scenes to breathe. The situations he creates are deliberately protracted to find surprises and to oscillate between comedy and drama. While Aaron Paul excels in imagining Jesse as an intense, damaged fellow who is deeply traumatised by his experiences, he also thrives off Gilligan’s feel for dark humour. There is a funny moment where he is adamant that Ed has faked calling the police. When he turns around, he sees that the cops have already arrived. His expression is the scene’s unexpected punchline. 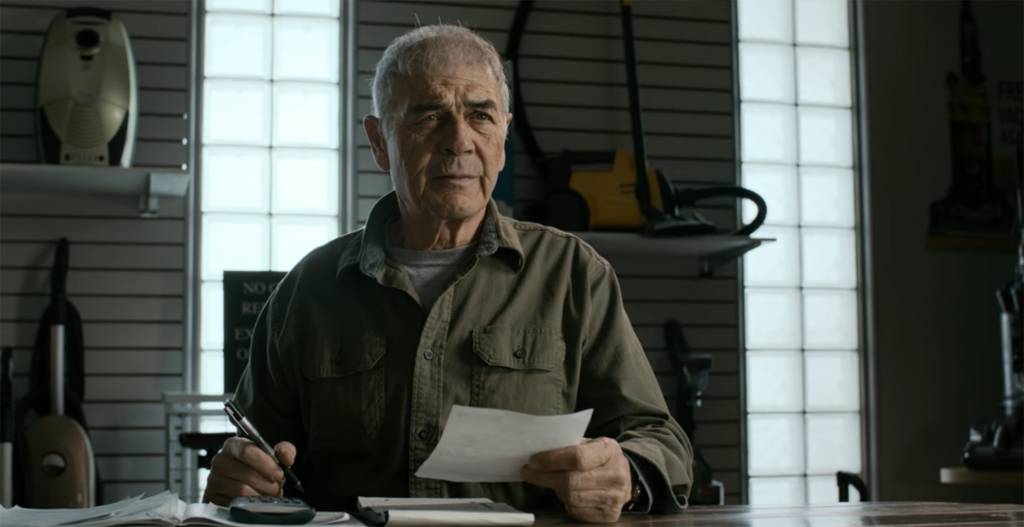 The film’s ending unifies past trauma, contained spaces, and mundanity. Jesse is dropped near Alaska and the snow initially recalls a cabin Walt stayed in. Instead, Jesse enjoys the wide-open spaces and remembers his girlfriend, Jane (Krysten Ritter). Before she died, she argued for making decisions for herself instead of leaving it to the universe. Similarly, Jesse cannot reverse the past but is free to make his own choices. The psychology is reflected by a high angle shot that visualises the open spaces of the countryside. The broader landscape reflects the places he can travel to on his own, comparable to a child now grown and free to explore the world.

While not as dramatically intense or innovative as some of the show’s most famous episodes, El Camino showcases solid writing and direction that evokes a satisfying conclusion. The film’s only shortcoming is that the actors have visibly aged. It is jarring how much Jesse Plemons has physically changed in the last few years. Similarly, there is a flashback between Jesse and Walt that is meant to take place before their RV was destroyed in Season 3. Walt’s appearance is distracting because Bryan Cranston has aged too.

Three people are credited with providing him with a bald cap, which is hilarious. It should be noted that this is also not an entry point to the series because it is littered with large and subtle references. One intriguing part is the fate of Lydia who was poisoned at the end of Season 5. Major characters, including Skyler, Marie, and Saul Goodman, remain absent though. Nonetheless, it does not stray from finding humanity in impossible situations. The film underlines how even terribly flawed people like Jesse who have made ugly mistakes are constantly affected by their experiences. They are not bulletproof nor are they irredeemable. They continue to bleed and feel pain. Consequently, the character details and ideas regarding the past haunting the present, the banality of the criminal world, and the use of contained spaces makes this a necessary epilogue.

Summary: Rather than offering new insights into Breaking Bad’s excellent story, El Camino reinforces the show’s best traits and proves to be a necessary epilogue.