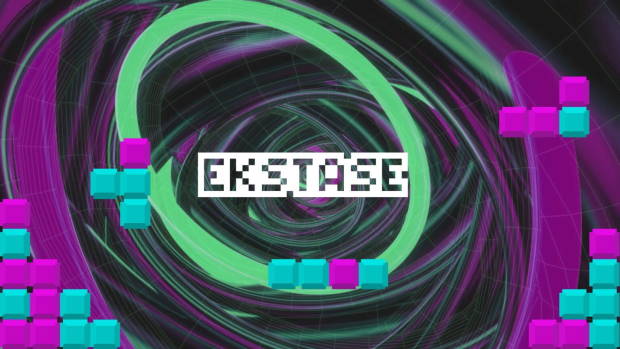 Summary: A new take on the classic falling brick game... now with a kicking techno beat!

I have to say that I’m not sure what world the person who put out the promotional blurb for Ekstase is living in but stating “the long forgotten falling block puzzle genre” indicates perhaps they spent so much time making this game that they didn’t notice that the falling block puzzle genre has been doing fine and is far from a forgotten style. Having said that… Ekstase is fun! 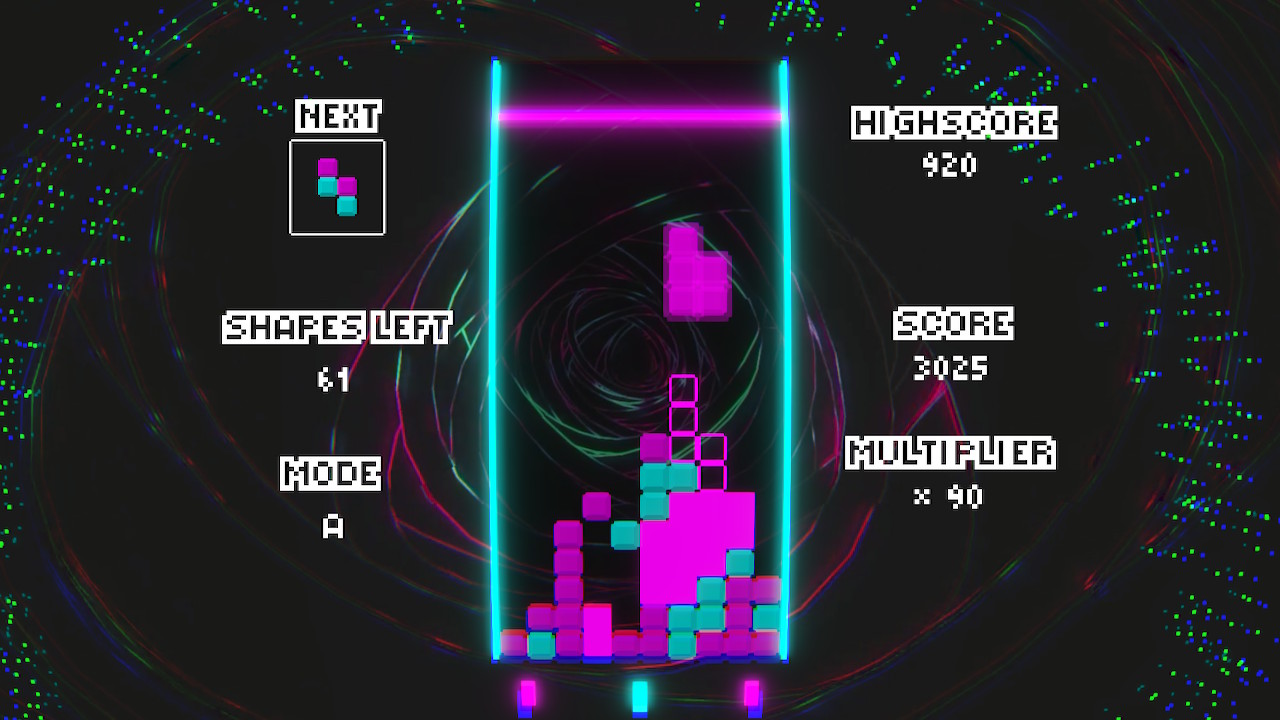 From first look it’s clear it is indeed a love letter to “Berlin and it’s techno scene”. I don’t think I saw the original Tetris arcade game but I certainly grew up with the PC version and it’s been a game that holds a fond part of my memory banks for decades now. Ekstase takes that familiar game and puts a few new twists on it, but retains enough of the core game mechanic that us oldies won’t feel too out of place, while the younger generation can enjoy the new challenges (oblivious to the heritage). 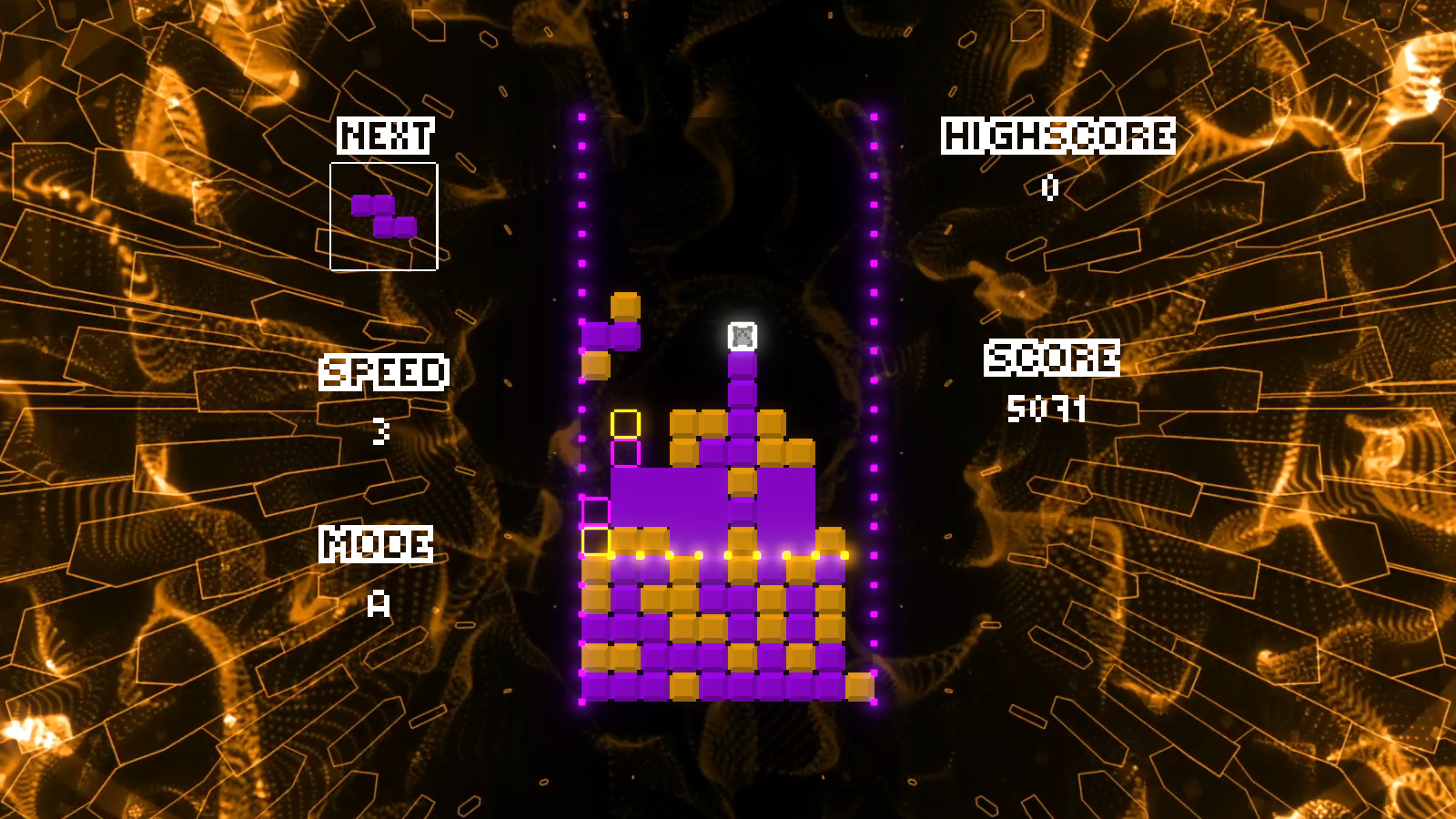 The first main difference is that the standard game uses only two colours… soon after noticing that, you will notice a “scan line” go down the screen… it alternates between the colours and if you’ve managed to collect enough blocks of the same colour together it will remove them when it passes over them. Unlike regular Tetris, Ekstase’s blocks aren’t permanently joined together either, so once you place one part on a block… the rest of the shape can and will fall into any gaps under it. This obviously creates a slightly different game play mechanic to be aware of and take advantage of when possible. 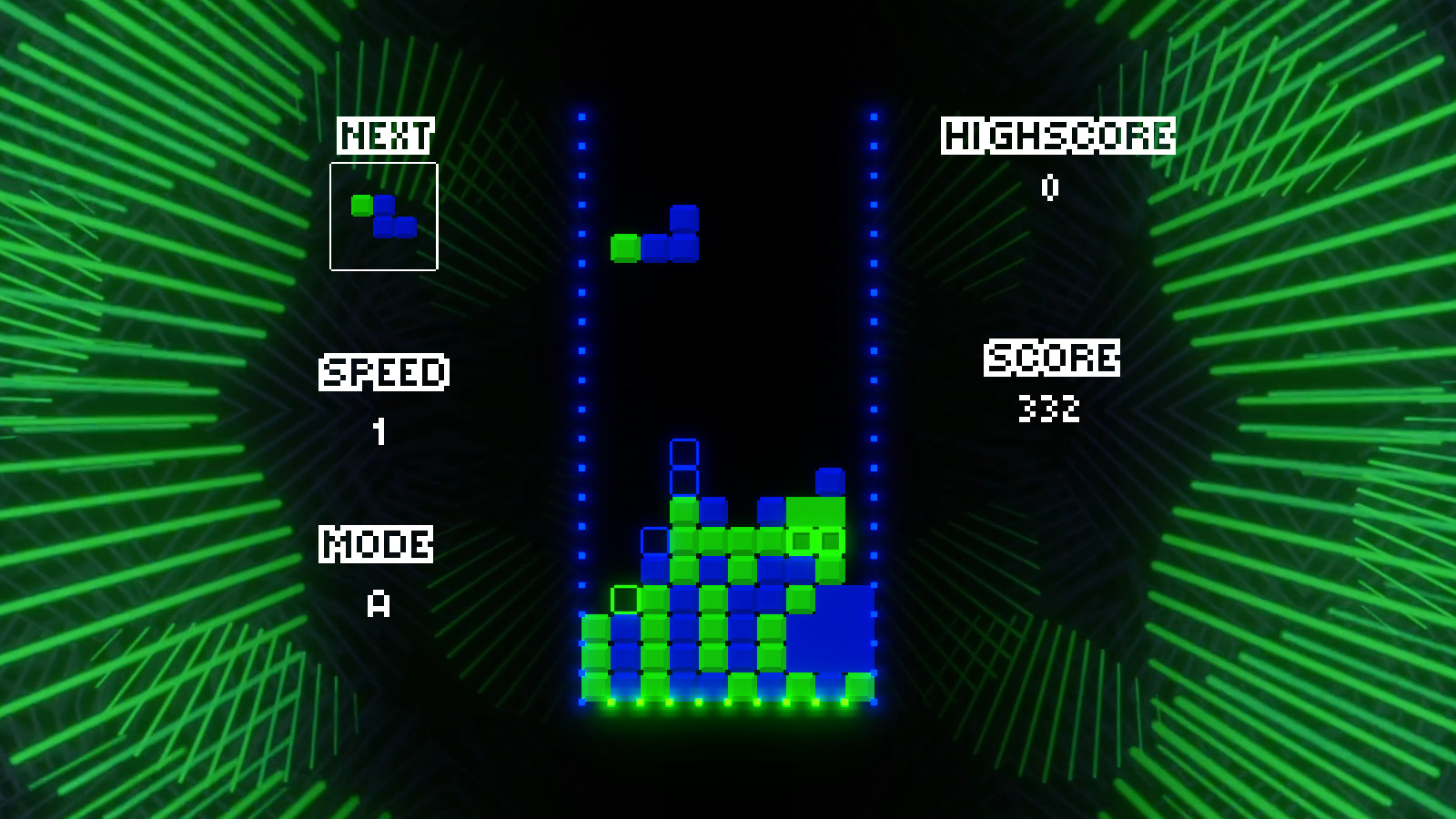 I should really address the music before continuing. That love letter mentioned the “techno scene” and the soundtrack certainly “brings the noise”. If you weren’t feeling energised beforehand, once the music starts you should start feeling much more awake and with it… the thumping beat urging you to make the most of your blocks. (Depending on what game type you choose, you may even need to pay close attention to the beats to make sure you are making your moves in time with them). 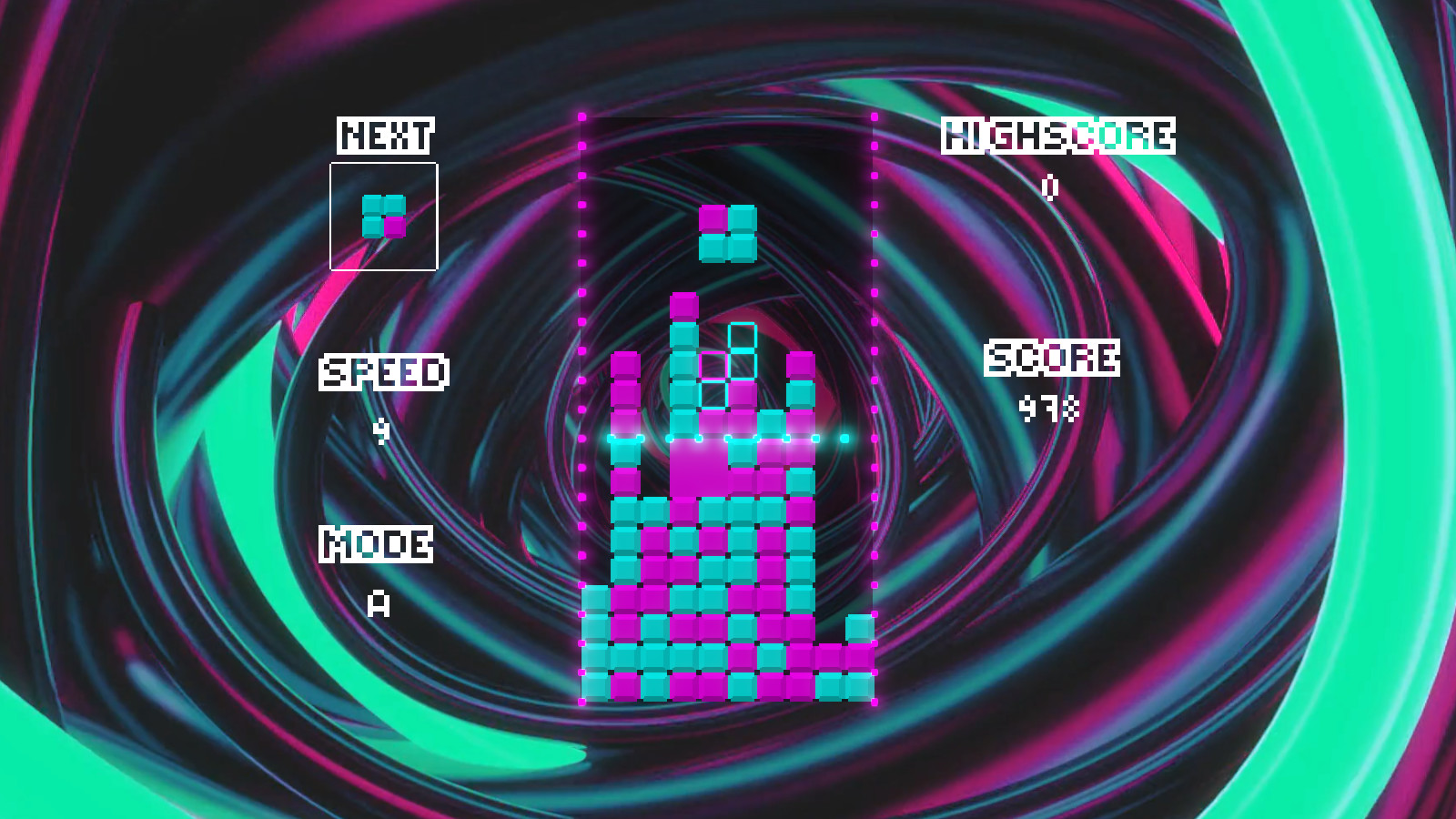 The other main difference between Ekstase and Tetris is the way the blocks work. When you first jump in you will find that the “rotation” key moves the coloured block within your shape… so you have to put it in the best position to fall and make a collection of that colour. But if you prefer the more traditional Tetris style you can swap it over to the more familiar rotating of the actual shape itself. Choice is actually a big thing here too as the game allows you to change a number of the parameters, including the colours (especially helpful for those who are colour blind)… that sort of accessibility it very much appreciated! 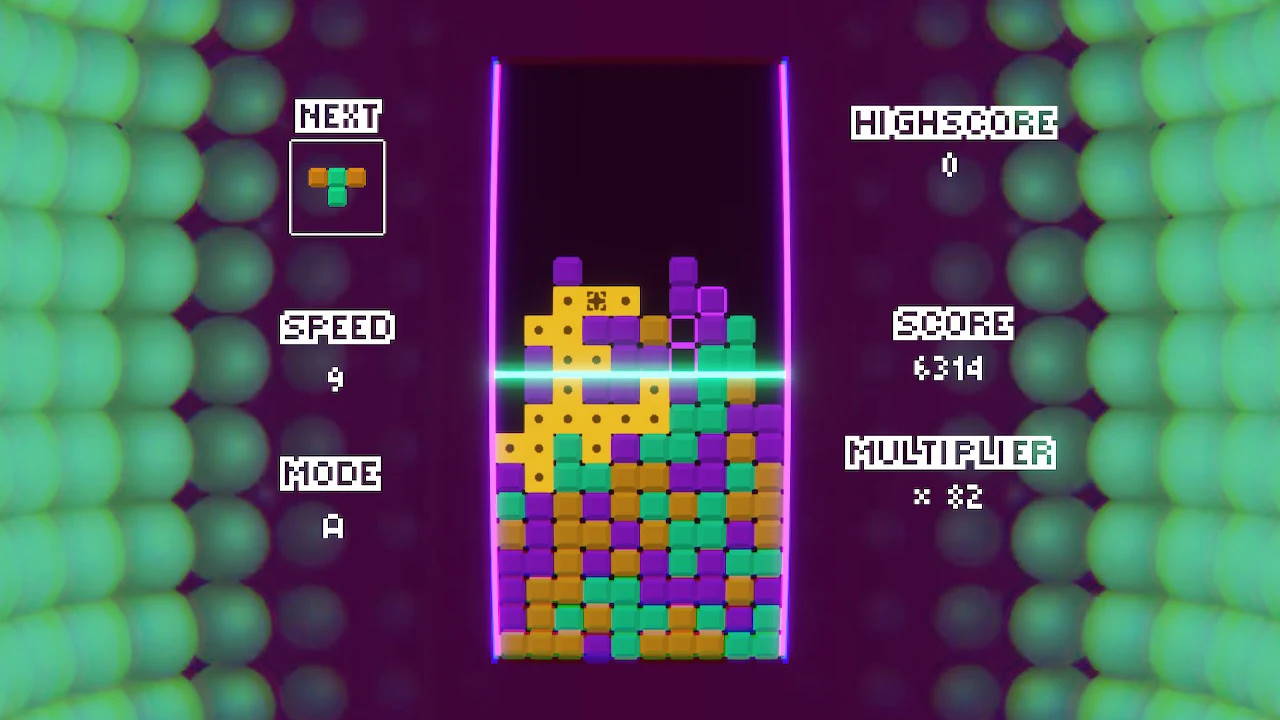 With the variety on offer here in a generally familiar feeling setting, Ekstase has a lot going for it. It’s a pretty decent price for a game that works well as a pick up and play title… any time you have a few spare minutes you can just jump in and have a quick go (and potentially find hours have slipped by).

I’d be happy to recommend fans of Tetris or other “falling block puzzle genre” games pick up a copy.