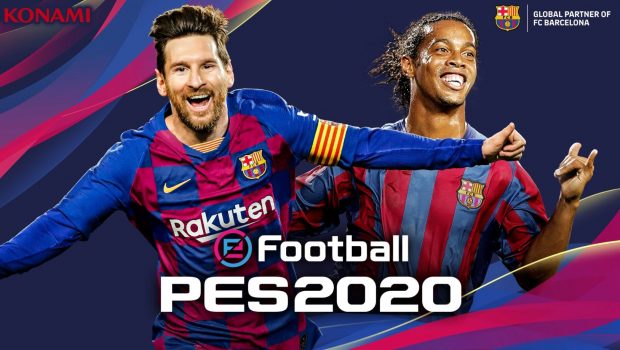 Final design features Messi, Gnabry, Pjanić and McTominay.
Edit Mode included in the demo for the first time, with data carrying over to full game

Konami Digital Entertainment B.V. announced that the demo for the upcoming eFootball PES 2020 will be available to download from today on PlayStation®4, Xbox One™, and PC STEAM. In addition, Lionel Messi, Serge Gnabry, Miralem Pjanić and Scott McTominay have all been revealed as global cover stars for the Standard Edition of the new game.

The demo presents the first chance for all players to take control of KONAMI’s new partner clubs, including Juventus FC – who’s name, kit, crest and stadium will feature exclusively in eFootball PES 2020 – Manchester United and FC Bayern. The latter’s Allianz Arena is another example of a stadium that can only be played exclusively in eFootball PES 2020, starting with today’s demo. Joining KONAMI’s growing collection of the world’s most successful football clubs is FC Barcelona and Arsenal FC – both of which recently announced partnership renewals and commitments to relationships that began several years ago.

FC Barcelona legend Lionel Messi, whose glittering career has seen him win over 30 trophies, returns to the cover of the game for eFootball PES 2020 accompanied by the three international stars.

Serge Gnabry, a current Bayern midfielder, with eight caps for the German national team, is an official eFootball PES Ambassador and is starring on the cover for the first time. FC Bayern is Germany’s biggest team, winning over 40 domestic trophies and cups throughout their long and successful history.

Midfield maestro Miralem Pjanić, fresh from his third Serie A title win with Juventus FC, is the third player to be revealed for the cover. Juventus FC is the most successful Italian football team with over 30 Italian Championship successes and has recently announced a long-term, exclusive partnership with KONAMI.

Scott McTominay, the Manchester United midfielder who is taking the footballing world by storm, is the final player to feature on the new cover of eFootball PES 2020. After winning the English top league 20 times, Manchester United is England’s most successful club.

The full roster of 13 teams available in the demo is as follows:

For the first time, Edit Mode will be included in the demo for PS4 and PC, meaning the active PES community will be able to begin customising players, squads and kits ahead of the full game release. Six leagues will be available to edit in the demo, with all data automatically transferring to the full version of the game, once it is released. In addition to the Edit Mode, players will also have limited access to Online and Offline game modes.

“With such brilliant new club partnerships under our belt for eFootball PES 2020, there was no way to just pick one Ambassador to feature on the cover this year,” commented Jonas Lygaard, Senior Director Brand & Business Development at Konami Digital Entertainment B.V. “From Messi, who is no stranger to our covers, through to Gnabry, Pjanić and McTominay who all have huge global followings, we are confident that eFootball PES 2020 will have something great for everyone, no matter what team you support.”

eFootball PES 2020 ushers in a new decade of industry-leading football simulation with a bold promise to revolutionise eFootball and introduce the sport to a global audience. The game features a brand-new mode called Matchday that will allow players to pick a side and come together for weekly events to compete in the biggest matches in football and help secure victory for your team.

eFootball PES 2020 will be available on PlayStation®4, Xbox One™, and PC STEAM, on September 10th

For all the latest news on eFootball PES 2020 and for further information, please follow: