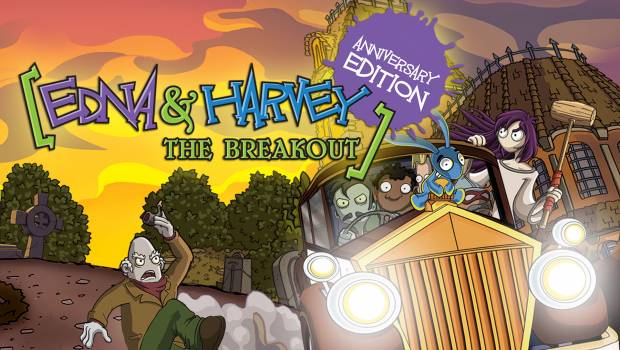 There’s nothing more nostalgic than a classic point-and-click puzzle game. Some of my earliest gaming memories are playing puzzlers with funny characters and simple yet charming cartoon designs, racking my brain to figure out which absurd way I can get past the various obstacles in the protagonist’s path. This style of game is so embedded in my childhood that returning to any form of entertainment in the same vein is instantly nostalgic. And, because of those reasons, the new Anniversary remaster of Edna & Harvey: The Breakout was a must play.

It’s currently available as a digital download on the Microsoft Store, Steam, PlayStation, as well as on the Nintendo eShop. I’m reviewing the PlayStation version, however it looks like copies play almost exactly the same.

We meet our lead, Edna, in a mental institution. Edna is suffering from memory loss, the only thing she (and therefore we, as the player) know is that she’s locked up for a mysterious, and potentially malicious, reason. Along with her toy rabbit Harvey, you navigate the institution and attempt to breakout. Along the way, you meet many strange and wonderful and often-times hilarious characters, as you solve puzzle after puzzle and try your best to escape.

As soon as the game boots up, you are met with beautiful cartoony, cel-shaded visuals. The character designs are great, the room designs are great, the general look of this game is joy to look at. Everything is smooth and colorful, you can tell there’s been a lot of care put into making this remaster look as amazing and modern as possible.

Seeing as it’s a remaster, the game also gives you the option to play with the classic look from 2008. These older visuals are a lot rougher and appear to have an almost hand-drawn quality to them. I’m sure fans of the original will be glad to see this option, especially seeing as the game is available on so many platforms now, however I preferred to play with the remaster as it looked a lot cleaner. 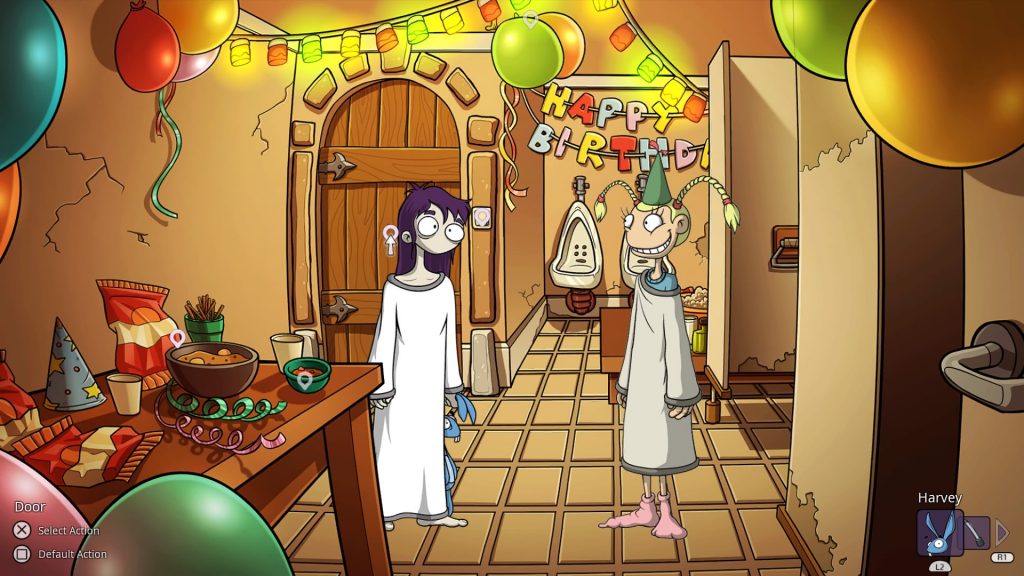 The gameplay is very simple, as are most games in this genre. Navigating the various rooms you find yourself in is very easy, as are the methods you use to talk and interact with things. Almost every object in the game can be interacted with, and in lots of different ways as well. You can ask Harvey what he thinks about something, you can try picking it up, or you can make Edna talk directly at it as if it’s sentient. If you choose to talk to the object, Harvey usually puts on a voice and responds as the object. I’m not ashamed to say that I added on many hours of gameplay exploring these different options with every single object I came across.

The puzzles themselves are well designed as well. They aren’t super difficult and you won’t be stuck on any one obstacle for hours on end, however this isn’t the sort of game you can only half-pay attention to. Because of this, I might even suggest this to friends as a good jumping on point for point-and-click puzzlers, as it’s easy to jump into.

Going into this game, I was a little unsure about how it would control on the PS4. Thankfully I can report that it runs very smoothly. It would’ve been nice to have some button prompts at the start of the game as you have to figure out which buttons and triggers to use on your own, however it’s pretty straight-forward and easy to figure out.

As mentioned, the humor is a big part of this game. It’s impossible to go 2 minutes without at least one joke. Because they are so frequent, you’re going to get a few that don’t land as well as others, but you’ll be laughing along and having fun for most of the run-time. Seeing as the game is from 2008, there’s bound to be a couple jokes that don’t age well, and that is the case here. Usually these jokes occur when Edna asks Harvey about something or Harvey responds to a question Edna has asked an inanimate object. For example, when he responds to a question Edna has asked, he’ll usually respond with an accent that may be considered insensitive. It’s hard to look past these moments as they do happen frequently, however I am glad that they didn’t cut these parts out completely. Maybe it would be nice to have a content warning up front, but the game is rated MA 15+ in Australia and make it obvious that it isn’t for younger players.

Finally, the voice acting! It’s great. The performers do a great job with the script. It is pretty obvious that they are using the same audio as the original release as you can hear a small amount of white-noise in the background as well as the audio quality being a bit low, but this doesn’t take away from the overall experience. The game is originally German and while doing some research I saw that when the original game came out in English it got mixed reviews due to the sloppy translation. It seems like they’ve fixed that up here, although I’m unsure how as it sounds like the same voice actors from that original English release.

The Anniversary Edition of Edna & Harvey: The Breakout is a massive success, bound to bring in new and old players alike. There’s a few things that don’t age well, but the charming graphics and simple gameplay is a huge accomplishment. If you love those classic comedic point-and-click puzzle games, you can’t look past this release. 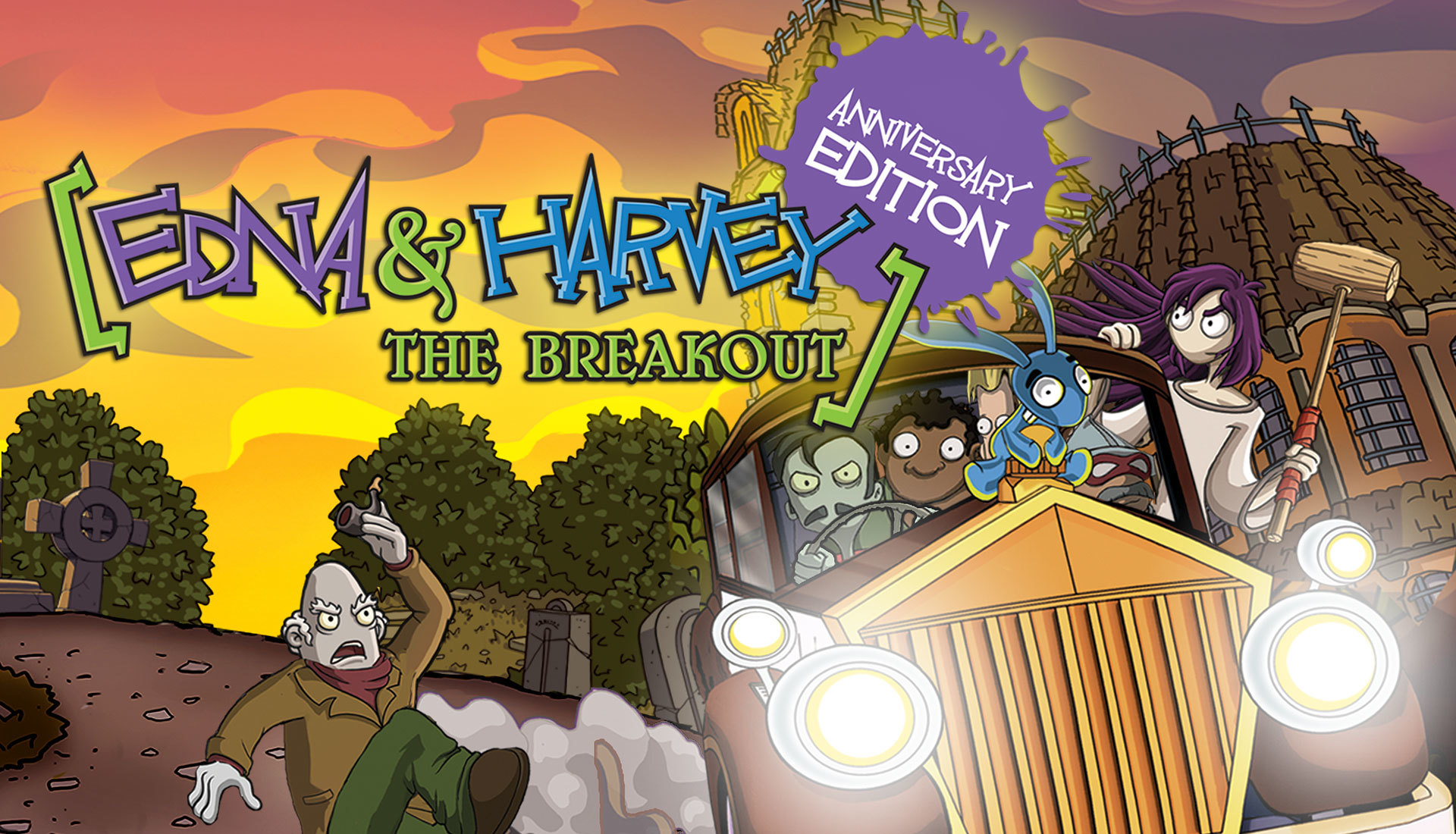