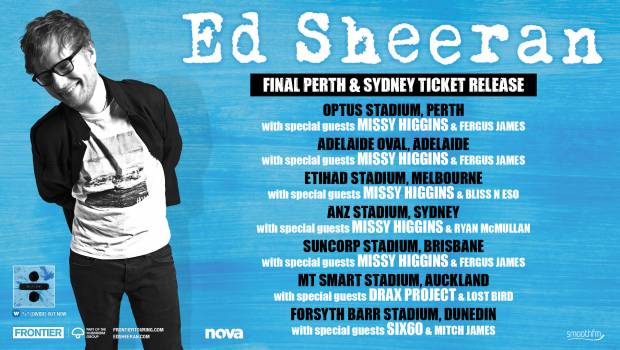 Ed Sheeran’s record-breaking Australian and New Zealand tour begins in exactly one week’s time! Hitting seven cities for a whopping eighteen stadium shows, this will be the biggest concert tour in our region’s history.

Joining the already announced Missy Higgins (all Australian shows), Drax Project (all Auckland shows), and Six60 (all Dunedin shows) as special guests across the tour, Frontier Touring are delighted to confirm five talented artists who will open proceedings at the show.

Joining Ed on his Perth, Adelaide and Brisbane shows will be up and coming Sydney singer-songwriter Fergus James. Singled out by Ed as one to watch, Fergus’ sound is a melting pot of finger-picked guitar, coated with soft folk lyrics.

Fergus hit an early career high when he had the chance to meet and perform for pop megastar Justin Timberlake while studying at the Newtown High School of the Performing Arts. Justin’s reaction to Fergus’ original song ‘Snow’ went viral, accumulating close to 500,000 views on Facebook.

Having spent the past twelve months collaborating with noted writers and producers including Pip Norman (Troye Sivan) and John Fortis (Ellie Goulding, Lana Del Ray), this is set to be the start of a breakout year for Fergus. Don’t miss the chance to be among the first to witness this phenomenal talent perform live.

Opening all four of Ed’s Melbourne shows will be Australia’s own Bliss n Eso. One of the country’s most successful and esteemed acts, the trio have broken records, won ARIA and APRA Awards, staged spectacular live shows and toured the globe.

Their most recent release Off The Grid debuted at the top of the ARIA Album Chart – their third consecutive album to do so – and received widespread critical acclaim, while its accompanying tour saw the Sydney group play to their huge and loyal fanbase across 32 sold-out shows. Single ‘Moments (feat. Gavin James)’ received an ARIA Song Of The Year nomination and has racked up close to 30 million streams since release.

No strangers to sharing the stage together, Irish singer Ryan McMullan will open Ed’s three Sydney shows after supporting the European leg of the Divide Tour last year.  Imbued with quiet confidence, Ryan’s engaging stage presence and talent has earned him fans across the globe including Snow Patrol’s Gary Lightbody who hailed him as “one of the most exciting artists to come out of Northern Ireland, voice of an angel”.

Wellington folk duo LOST BiRD will join Ed at all three of his Auckland shows. Made up of Ali Whitton (guitar, vocals) and Oliver Vetter (violin, vocals), the pair blend piercing and poetic lyrics with plaintive and raw melodies to create a sound that is uniquely their own. They have built a steadfast following of fans thanks in part to their live shows which are loved for both their music and the quick-witted banter between songs.

Rounding out the killer line-up of opening acts is New Zealand singer-songwriter Mitch James who will open Ed’s three Dunedin shows. The Auckland native moved to London at just 17 and spent the following three years busking throughout the UK and Europe. Moving south to Dunedin upon his return, Mitch has since released two singles which have picked up nation-wide airplay and has a huge following of fans eagerly awaiting his debut album.

In further exciting news, Frontier Touring are delighted to confirm a final ticket release for Ed’s three shows at Sydney’s ANZ Stadium. Ed’s production team have visited the venue to review sight lines and have been able to release 4,500 General Admission (Standing) tickets across the three concerts, meeting huge demand for these previously sold out concerts. These new tickets will go on sale on Monday 26 February from 12noon AEDT.

Similarly in Perth, updated production information has allowed for 1,000 new tickets to be released to sale. These new tickets will also go on sale on Monday 26 February from 9am Perth time.

Adding to the Perth excitement is the fact that Ed Sheeran will be the first ever concert at Perth’s Optus Stadium. While extra transport measures have been put in place, fans are encouraged to arrive early to avoid potential delays entering the venue. To encourage ticket holders to arrive early for the first concert, Nova 93.7 are offering one lucky Friday ticket holder (and ticket holding friend) the chance to meet Ed Sheeran before the concert. Tune into Nova 93.7 next week for details on how you can win.

From theatres to stadiums, Ed has sold out every single show on his four tours of our shores, collecting countless shining reviews along the way. Don’t miss the chance to be a part of this record-breaking tour that is now just one week away!