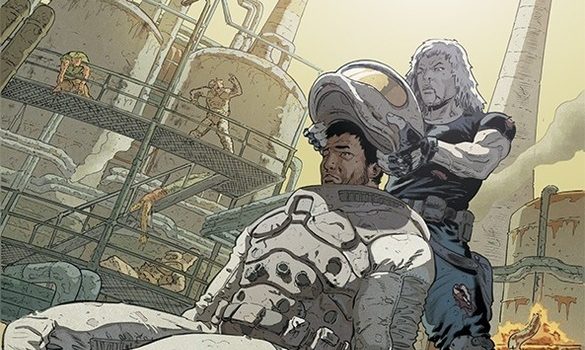 Summary: This is one of the strongest issues of Eclipse yet! Get in now and ride it to the end!

The penultimate issue of Eclipse has arrived!  It resolves some of the threads from previous issues and leads up brilliantly to the final issue.  Eclipse has always been a well paced read, as Zack Kaplan seems to know exactly how to roll out a story to keep a reader hooked.  This issue is no exception, and it sets up a finale where no one can say what may happen. 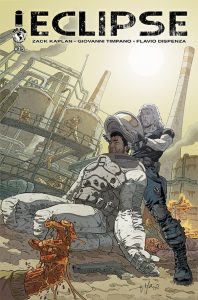 Giovanni Timpano continues to impress with this issue.  Whether it’s his attention to details in the background, or the horrifying appearance of those poor souls caught in the sun, his work brings the world of Eclipse to life.  This issue in particular does a great job showing the danger of the sun.  It seems like Timpano has decided to take it up a notch for the final few issues.  The level of detail he’s used in the panels depicting individuals caught in the sun are amazing.  The images are both terrifying and grotesque, yet fit perfectly with the comic as a whole.  It’s not gratuitous, it is perfectly appropriate for the story, and as we approach the finale, it’s nice to have an extra reminder of the stakes involved in this world.

The colour work of Flavio Dispenza also stands out, for fleshing out and adding that extra level to the artwork.  While Timpano’s attention to detail is breathtaking, Dispenza’s art brings everything to that next level.  The layering work in the images of people caught in the sun, showing the burns on multiple levels, it’s almost like you can feel the heat of them rising off the page.

Zack Kaplan moves Eclipse one issue closer to the finale.  He provides a little bit more background into the history of Solarity, in particular Nick Brandt and Gregor Van Gorn.  Seeing that Brandt’s actions have been as a direct result of the death of his wife adds another layer to his character.  Van Gorn it seems is acting as sort of the guy willing to be the bad guy to protect the city.  All told it was nice seeing these flashbacks the past couple issues.

This issue has some great moments of action and plot building.  The conversations involving Parker as he details his plans as well as Cielo and her father discussing their fractured relationship being among the forefront.  Contrasting with that we have Parker’s father bringing several men to confront his son.  Parker assumes he’s there to capitulate and tell the people how Solarity came to power, but Gregor has other plans.  Once Bax and his team stop the bombing of the plant, Gregor turns on his son.  This leads to an amazingly drawn scene that shows that Parker is still one step ahead of everyone.  As well, through all his various conversations, we learn what Parker’s aims are, but not how he intends to carry them out.  I feel that this is a really strong point in this issue, as though several plot points are resolved, yet Kaplan has managed to keep the endgame secret.

This issue does a great job setting Eclipse up for its big finale.  The continued growth of characters, as well as additional fleshing out of the world, will leave regular readers fully satisfied, and new ones asking for more.  This is also one of the strongest issues artistically, as Timpano and Dispenza seem to have found another gear for the art work, and some of the death scenes in this book are better than anything we’ve seen before in this series.  While several threads are tied up nicely, and we learn what Parker’s endgame is, Kaplan has deliberately kept the how quiet.  We’re going to have to wait one more month for the payoff!

This is one of the strongest issues of Eclipse yet! Get in now and ride it to the end!  5 out of 5 stars!