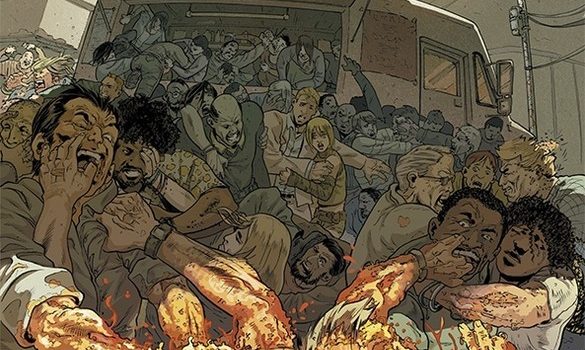 Summary: This issue moves closer to the conclusion in this final arc, and the stakes are set for what looks like will be an explosive conclusion.

This issue picks up immediately in the aftermath of Eclipse #13, with both of our protagonists in dire straights.  The albino, Parker Van Gorn has taken control of the solar plant, and is threatening to destroy them, potentially dooming the whole city.  With this issue we move closer to the conclusion in this final arc, and the stakes are set for what looks like it will be an explosive conclusion.

Giovanni Timpano and Flavio Dispenza have put together one of the more heavily detailed issues yet.  The scene near the beginning of the book with Cielo and her father trying to get out of the sun and to safety is probably one of the best examples.  From the way clothes move as people try to climb over each other in a desperate attempt to stay in the shade exemplifies this.  Little details are not forgotten, but are included to further up the tension and to show how real the stakes are for these characters.  The fear of these citizens trapped on the surface with the shade they are seeking sanctuary in slowly disappearing.

Cielo and her father have to make it across the square, passing bodies that litter the street.  Even the litter is represented, showing the tripping hazards they have to get around.  One misstep here literally means death.  The physical effort they are taking to move their cover with them is also accurately portrayed, with both fear and determination playing across both their features and their bodies.  It just works with the story on so many levels.

With Eclipse #13 ending with our heroes in dire straights, this issue opens with the stakes being high.  Cielo and her father were left trapped on the surface as the sun came up, and their escape is one of the most tension filled sequences I’ve ever seen in a comic.  The way that Kaplan brings these two together to fight for survival is masterfully done, and combined with the art the sequence is nail-bitingly good.

The first two pages also show how things turned so sour between Solarity and the United States Government, which led to the aggressive way that Solarity appears to solve problems in the present.  It also shows just how much Cielo’s father has been changed by this new world.  We can see that he wasn’t always a heartless businessman.

The rest of the issue focuses on the rescue of Bax, and the subsequent capture of Cielo and her father by the resistance – who now work for Parker.  Kaplan lays the groundwork here for all of the characters to move towards the same place.  Bax is recruited to seek out Parker and stop his plan, and Parker lays out his endgame.  The stakes are high, and there are only two issues left to draw it all together.

Eclipse has been a strong series right from inception, and while last issue felt like it moved one hundred miles a minute, this one opts for more of a slow burn.  It resolves the situations our heroes had been left in, and sets the groundwork for the next two issues to sprint to the finish.  The world of Eclipse is remarkably alive, owing to the nuances in the story and the amazing levels of detail in the art and colour work.  With Parker’s plans unveiled, I’m really curious to see how this ends.  Ultimately, it’s a choice between living in the light or living in darkness, and where humanity is going to choose to go is completely up for grabs at this point.

Another great issue as the series rockets towards its conclusion!  4.5 out of 5 stars! 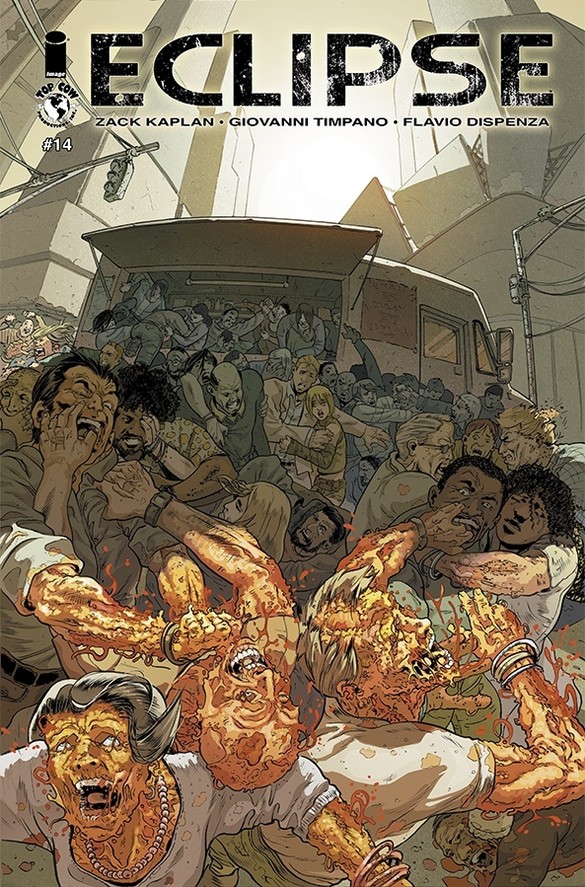