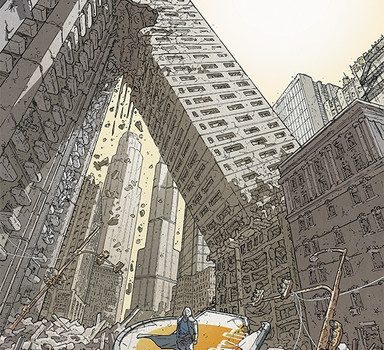 Summary: This issue is a fantastic continuation of the series, and runs at a breakneck pace.

Issue #13 of Eclipse begins the final arc in Zack Kaplan’s post-apocalyptic Sci-Fi epic.  Ten years ago, a solar flare washed over Earth, and after that contact with the sun led to an agonizing and burning death.  Humanity had fled underground, but now a cure has been found, however, the man controlling it may be more interested in mankind’s destruction than salvation.

This is a beautifully rendered book, with incredible attention to detail throughout.  Characters and settings are given loving attention, as each play an integral role in telling the story.  Attention is given to every aspect of the characters, from body language to facial expressions.  In certain scenes of this book you can see the panic and fear not just in the featured characters of the scene, but in the entire throng of people they stand among.  This gives an organic and realistic feel to the book, placing the reader in the crowd with the characters.

After the excellent work of Giovanni Timpano on the art, we have the colour work of Flavio Dispenza.  Eclipse is a book that is a constant contrast of light and dark.  This is apparent not only in the characters, but in the very world they inhabit.  As such, strong colour work is vital to the art working in this book, and the use of darkness and shadows, as well as the bleached out and harsh light of the sun need to be done in a very careful manner.  Too much and the characters vanish, too little and the danger inherent in the setting doesn’t come across.  Dispenza manages to walk this line on every page.  He captures the varying degrees of darkness that mankind now inhabits, as well as showcases the overwhelming harshness of the sun’s light.  This is what takes the art from being good, to great.

This issue takes a bit of a break from previous narrative arcs.  Most arcs began slowly, deepening the mystery and slowly increasing the tension until everything came to head in the final issue of the arc.  Not in this one!  The book begins with a flashback, showing Bax’s team discovering a working power station run by Solarity.  This is vital, as the plant plays a key role in how this issue plays out.

Cielo is being held captive by her father, in a scene that is broken up by Parker Van Gorn showing himself to the resistance.  Parker is now an albino, and he has a plan.  He quickly seizes control of the resistance, and mobilizes them to capture the power station.  He then cuts the power.  This traps large groups of people on the surface just as the sun is about to rise, and leaves Cielo and Bax (now a prisoner working on a tunneling crew), in danger of being caught in the sun.

This issue moves faster than previous arcs, which tells us that Kaplan intends to sprint to the finish.  This leaves us to wonder a few key questions: Will the cure be distributed to all of humanity? How will our heroes escape? Will there be a happy ending?  The world that has been built is dangerous, and with the emergence of a true villain, the deck may just be stacked too much against our heroes.

Kaplan’s writing blends wonderfully with the work of the artistic team, making for a complete book.  The art fleshes the world out so well that it truly does take the place of another character.

This book is a fantastic continuation of the series, and runs at a breakneck pace.  It’s a fun, fast book, and looks amazing.  5 out of 5 stars! 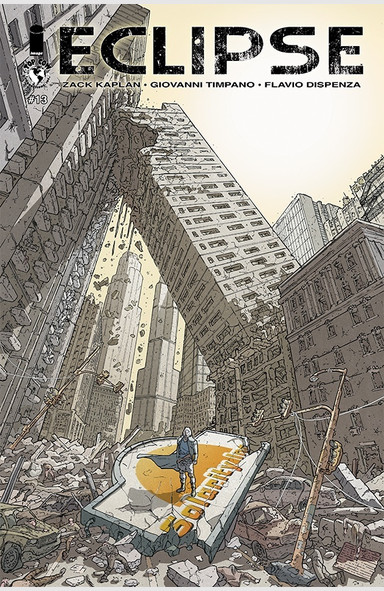