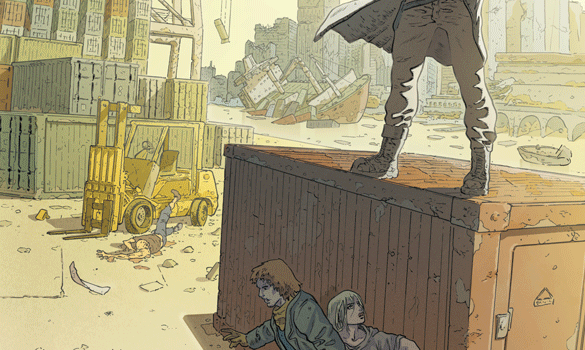 Summary: If you’re a fan of post-apocalyptic sci-fi, or just a good read, this issue is a must read

Eclipse is set in a future in which a solar event has changed how the sun affects humans.  Instead of providing us with life, it burns us alive.

This issue picks up the story with the appearance of an albino that is seemingly immune to the incendiary effect of sunlight.  Two factions, one corporate and one underground, seem about to have a showdown over this mystery man.

Giovanni Timpano handles the cover duties and interior art for this book.  The cover features a heavily clothed figure standing on top of a shipping crate, staring down in an intimidating fashion at a young couple that appear to be either hiding from him or the sun.  They stand in the shade, which, from the looks on their faces, is fast disappearing.  The background appears to be a construction site with a ruined cityscape in the distance.  It gives a good feeling for the post-apocalyptic setting contained within, and gives a good example of the danger in this new world.

Timpano does a great job in this issue drawing a beat-up wasteland for this futuristic setting.  As well, Flavio Dispenza’s colour work really enhances the art.  The detail in the art is great, from the look of the setting, to the characters themselves.  The colours emphasize the differences between the dark world humanity has to live in to survive, and the bleached wasteland in the light of the sun.  As a necessity, there isn’t a lot of bright colour.  Things are either muted in the darkness, or bleached out in the sun.  The one exception is when two individuals get caught out in the sun.  The colour in that scene stands out in comparison to the bleached-out background.  The art also meshes well with the story as a whole, and supports it by giving life to the environment our characters are struggling in.

The book begins with a showdown between two factions over a mysterious albino.  It is quickly established that the albino is immune to the incendiary effects of the sun. One side seemingly wants him dead, the other alive.  The underground leadership want to trade the albino to ensure that Solarity, the corporate faction mentioned above, will leave them alone.  The two underground members that have him in their possession, Parker and Rose, disagree, and set into motion a plan to get the lab equipment to reverse engineer a cure.  We also learn that they are the children of two of Solarity’s partners and that they have their own reasons for pursuing the cure.

Though this book is several issues into an established story, it was very engaging, and easy to get into and caught up in.  Zack Kaplan has penned a great issue.  Making established characters in an issue in the middle of an arc engaging is no easy task.

Eclipse #10 is a very complete issue.  The art is solid and supports and enhances the story very well, and the writing is superb.  Kaplan has written some of the strongest comics this year, and this issue is no exception.  Though the issue is well into an established narrative, it is very easy for a casual reader to get into. The ending of the issue definitely leaves you wanting to see what happens next.

If you’re a fan of post-apocalyptic sci-fi, or just a good read, this issue is a must read.  It hits on all aspects, and while not as colourful as some books, more colour would take away from the atmosphere.  This creative team is worth checking out.  Eclipse #10 is 4.5 stars out of 5. 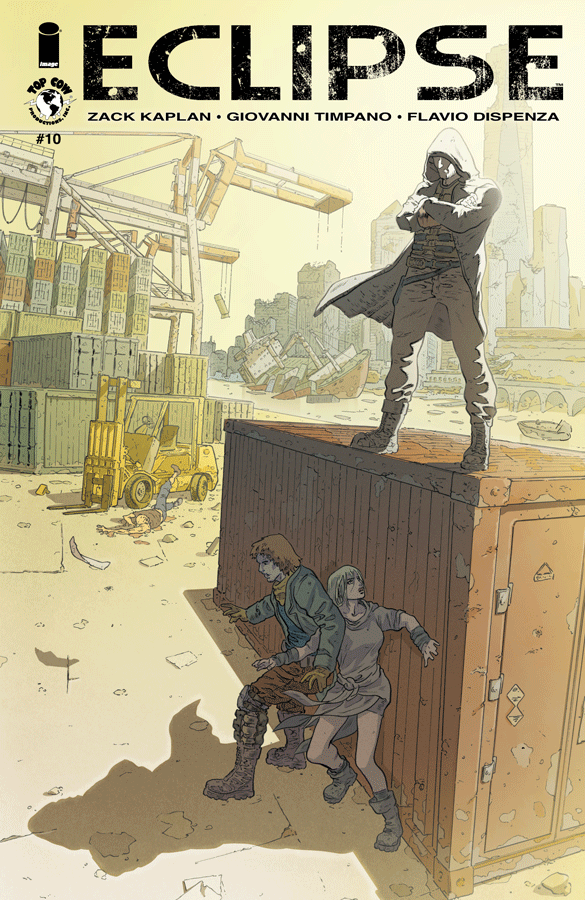