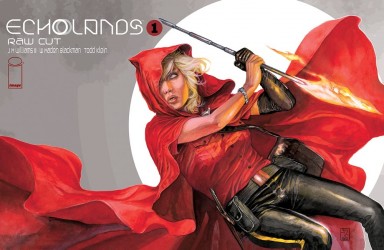 Echolands #1 story takes place in a post-apocalyptic future where a thief, Hope Redhood, steals an artifact with a strange past and with the ability to change her current world. However, she is still unaware of the artifact’s power and immense value as the police are chasing her. As she escapes, she seeks the help of a few of her friends, such as Cor, who does not only fights off the police but knows Red’s darkest secret and her powers?

She meets up later with her friends, and during the discussion on what to do with the artifact, they are attacked. Will Red and the crew escape what’s coming after them, and how will she use her powers to drive the comic’s narrative?

Echolands #1 goes against conventional comics by utilizing an untraditional landscape presentation structure where events in the comic span horizontally across two pages. The artists and colorists excel at their work where it is easy to follow the characters as they go move between different settings and environments. Despite seeming like there is too much going on in each other pages, the reader can identify distinct characters and some of their quirks and when magic is being used due to different visual styles and designs.