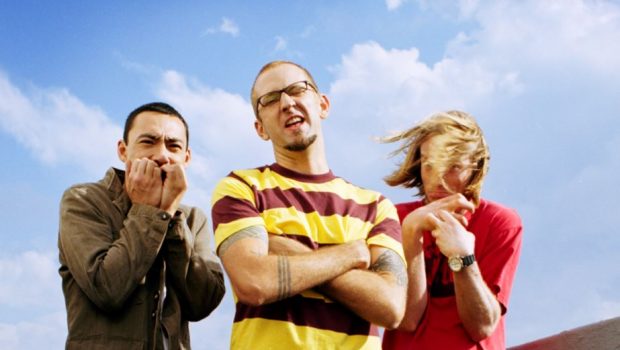 The team behind EB Expo 2017 on the Gold Coast are thrilled to announce the entertainment weekend will kick off its Gold Coast return with a special live music event Unit20. Regurgitator will be joined by Art vs. Science and 7Bit Hero to celebrate 20 years since Regurgitator’s ground-breaking second studio album Unit. The concert will rock Gold Coast Convention Centre on Friday 6 October.

For the first time ever, rock and gaming fans will get to witness a special collaboration of three bands with an iconic place in Australia’s pop culture and music scenes. Show-goers will be blown away by state-of-the art 3D visual effects and an amazing sensory experience.

More than 20 years after they first formed in Brisbane, Regurgitator are still going strong. After releasing their debut album Tu-Plang in 1996, their mega-popular follow-up Unit was released in 1997 which quickly went triple platinum and won five ARIA awards including Album of the Year.

Unit is but a pixel in time. A spec in the Australian music cultural cosmos. In itself a chimerical reaction to a love of music past. Forged in a self-created Dirty Room studio in the Fortitude Valley over a few weeks in August 1997 after returning from an extensive US tour with Helmet & The Melvins… then set adrift in the molecular world by Warner Music on NOV 3 1997. First conveyed into the live stratosphere at a ski club in the northern climes of Darwin on a balmy Halloween eve… this self-effacing monster of a retrotech platter stirred the self-styled opening jeer of I like your old stuff better than your new stuff, tumbling all that chose to follow into the rapidly embraced new stuff of beeps, blips and all out pop-rockin’ fun. Unit resolutely found its link in the musical DNA of the day and 20 years down the track this yellow dot still glows with all the intensity it rose that day to greet us with. The UNIT20 collaboration with EB Games strives for a unique multi-dimensional ocular moment, the only live revisitation we will emit across this double decade point in time… and even more the gratification to be joined in this celebration by musical compatriots Art vs Science along with 7 Bit Hero to help transmit the light and sound. Pong on indeed!

The trio guarantee to erase the roof and open the sky, as will electronic dance band Art vs. Science. The Sydney-based group won the ARIA award for Best Independent Release for their debut album The Experiment in 2011.

Art vs Science have come a long way since 2009. Their debut EP, featuring major hits ‘Parlez Vous Francais?’ (#2 in triple j’s 2008 Hottest 100) and ‘Magic Fountain’ (#9 the following year), cemented the Sydney three-piece as one of Australia’s favourite bands. In 2011, Art vs Science won an ARIA Award for Best Independent Album and were championed as festival headliners, welcomed back time and time again for their feel-good and dynamic live show.

Taking time off after their debut record, they honed their sound for 2014 EP Create / Destroy and the result was a self-assured release paying tribute to their dance rock roots, but with a new level of depth and vitality. When the trio reunited in 2015 for their sophomore release Off The Edge of The Earth and Into Forever, Forever it was with the same desire for renewal and transformation. Art vs Science have spent the past two years touring, and working on new music.

Hyper bit-pop band 7Bit Hero, who also develop video games for mobile platforms, will also get fingers dancing with their eclectic set which combines music with interactive visuals. During their show, your smartphone will be your joystick that allows you to control a character in the multi-player game projected behind the band.

“We could not be more excited to have the opportunity to bring Unit20 to the Gold Coast for an exclusive, once-in-a-lifetime show,” said Event Manager Trent Weekes.

“This is truly a historic musical event that will kick off a huge weekend of entertainment at the EB Expo. There will be no better place to be the second weekend of October.”

Tickets for sitting or standing areas start from only $49.95 and will be available via Ticketek.com.au, ebexpo.com.au or at all EB Games and ZiNG Pop Culture stores from Friday May 19. Concert doors will open at 7.30pm.