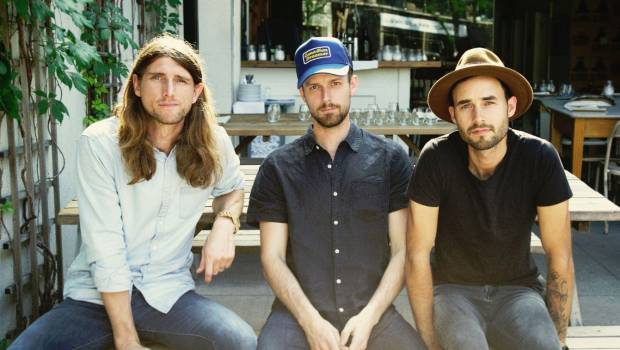 We catch-up with Koady from The East Pointers to talk about music… of course!

So tell us how you came together?

Late night beers and tunes! We were all touring the music circuit in Canada and USA and anytime we landed at the same festival we’d always find ourselves playing tunes into the early hours. We managed to find a window of time with everyone off the road so we recorded an album. We’ve been on the road full time ever since!

How did you come up with your band name?

A brainstorming session at a dingy bar in Charlottetown. East Point is a community Koady fished lobsters off of that’s not far from where 2 of us grew up, with PEI being one of the eastern most provinces in Canada it seemed like a good idea! We might have been influenced by the cheap beers at the time!

People, places and things. We are on the road full time so a lot of our tunes and songs are influenced by the places we visit and the people we meet. We try to write tunes that make people want to dance and songs that make people think. We hope the new record, What We Leave Behind, accomplishes that!

How would you describe your music style?

Upbeat folk music? The tunes are cheerful and the songs, although lyrically heavy, have a pulse you can move to!

What’s currently playing on your iPhone or Android smartphone?

Can you walk us through your single 82 fires?

We were doing a Festival of Small Halls tour through Tasmania last year with our good pal (from Melbourne) Liz Stringer while the wild fires were burning through much of the northwest. We wrote the song while hunkered down in a log cabin in the woods (not the most comforting place to be given the circumstances). A older gentleman in Penguin told us that there were 82 fires uncontained in the state, it was a humbling experience.

What’s your favourite element of 82 fires?

Its grit. I think the intensity of the being in Tasmania during the 2016 bush fires is captured on the recording. It’s a fun one to replicate at the live shows too.

Tell us what you enjoy the most about playing in front of a live audience?

Dancers. They set the vibe for the whole night. We play our best when the dance floor is full, it takes the edge off.

Lastly, What are you most looking forward to at the Queenscliff Music Festival?

Queenscliff has been on our radar since we first started touring Australia. The lineup is stacked so we’re looking forward to checking out the other bands. Every new festival is exciting, the venders, the volunteers, the scenery, the vibe, it’s all stuff we look forward to!

About: JUNO-Award winning Canadian trio The East Pointers release their second album, What We Leave Behind on Friday 29 September, and announce a battery of Australian dates that have them in every capital city and territory across the country. Dazzling musicianship and wild live shows have connected The East Pointers with audiences across the globe, making original roots music the hippest thing going. Fiddler/singer Tim Chaisson, banjoist Koady Chaisson and guitarist Jake Charron write about real life, sketching out its joys and sorrows in vivid strokes. That palpable authenticity makes their instrumental tunes practically cartwheel and infuses their lyric-driven songs with poignancy. Listening to The East Pointers’ brilliant second album What We Leave Behind – produced by superstar East Coast-bred songwriter/producer Gordie Sampson – is akin to meeting up with an old friend – and then going out for twenty drinks. eastpointers.ca | facebook.com/EastPointersMusic | play.spotify.com