Dungeons & Dragons Launches a Pivotal Year with Tyranny of Dragons

Sydney, Australia – May 21, 2014  – Today, Wizards of the Coast kicked off a pivotal year for Dungeons & Dragons, unveiling new serialised entertainment offerings that will bring the upcoming Tyranny of Dragons storyline to life as well as announcing the D&D Player’s Handbook, Monster Manual and Dungeon Master’s Guide for the highly-anticipated new rules set for the D&D tabletop roleplaying game. Together, these new offerings will command the attention of digital and tabletop RPG players alike, setting the foundation for the future of the brand and powering incredible, action-packed play experiences for fans. 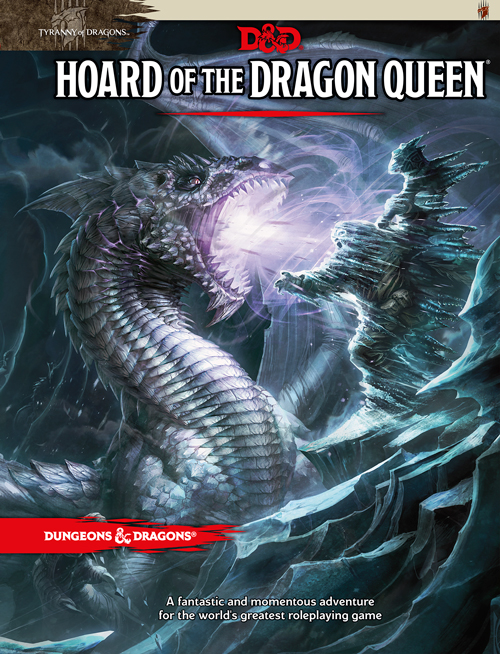 First out of the gates for Tyranny of Dragons digital offerings will be a new module for the highly-acclaimed Dungeons & Dragons MMO, Neverwinter, from Cryptic Studios and PerfectWorld Entertainment. The new module, aptly titled Tyranny of Dragons, will be the premier digital Dungeons & Dragons experience for players and will launch on August 14, 2014.

“We’ve had an incredible time being a key part of the Dungeons & Dragons experience,” said Jack Emmert, CEO and Co-Founder of Cryptic Studios. “Building Neverwinter has been an outstanding journey for our companies. With the new Tyranny of Dragons module, both Neverwinter and the larger Dungeons & Dragons franchise will continue to be the most compelling fantasy adventure for players new and old.”

For players eager to sink their teeth into the Tyranny of Dragons storyline around the gaming table, two new tabletop adventures will also release this year. Hoard of the Dragon Queen (August 19) and The Rise of Tiamat (October 21) will take players into the depths of the dragon’s lair, pitting them against Tiamat, the most fearsome dragon in D&D’s history.

In addition, Wizards has partnered with WizKids to produce a new line of D&D miniatures that fans can use in conjunction with their Tyranny of Dragons adventures, as well as complement their tabletop RPG experience brought forth by the new rules set. With these new minis, players can expect high-quality, pre-painted plastic miniatures featuring iconic heroes and villains straight from the Forgotten Realms.

“This is the biggest and most exciting year for Dungeons & Dragons yet,” said Nathan Stewart, Dungeons & Dragons Brand Director. “We’re excited to see the last two years of intense collaboration with our trusted partners and dedicated fans finally come to fruition.”

For the full Tyranny of Dragons story overview and product line-up, including PC and mobile games, tabletop roleplaying adventures, digital tools, collectible miniatures, comics, apparel and more visit DungeonsandDragons.com and stay tuned for more Tyranny of Dragons offerings and release dates to be announced in the coming months. Also, be sure to follow D&D on Facebook and Twitter.