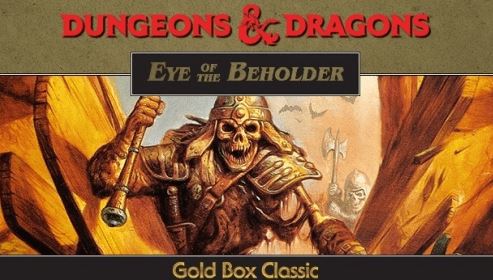 Dragonlance, Ravenloft, Eye of the Beholder, Forgotten Realms, Dark Sun….for fans of Dungeons & Dragons and PC RPGs, these names immediately evoke fond memories of fantastic adventures in dangerous dungeons, vampire-infested lands, and post-apocalyptic worlds. The Gold Box PC games, based on these worlds and others, are, decades after their original release, still seen as quintessential RPG gaming experiences, and today, publisher SNEG has some great news for fans of the Gold Box series — they will be coming to Steam later this month! Not only that, but many of the games will be enhanced to feature companion apps, a unified launcher and character party transfer tool, and customized DOSBox updates.

Launched in 1988, the Gold Box series of computer role-playing games (CRPGs) are beloved by millions of players worldwide. Veteran Dungeons & Dragons players and CRPG newcomers alike enjoyed these games and their variety of unique settings and challenges. Whether it’s exploring the high-fantasy worlds of the Forgotten Realms and Dragonlance, surviving the brutal hellscape of Dark Sun, or battling a supreme vampire in the Ravenloft games, there was a Gold Box game for everyone! Grab your sword, spellbook, or Bag of Holding, and get ready for a return to nostalgia-laden adventures later this month!

“Even decades after their original release, the Gold Box games are seen by many as iconic Dungeons & Dragons digital experiences, and they practically defined computer RPGs, ” said Oleg Klapovskiy, Director at SNEG. “Now, I’m overjoyed that we get to fulfill our dream of bringing these RPG gems back to PC gamers on Steam while introducing them to a new audience!”

The following collections of games will be available via Steam on March 25, 2022

SNEG will be adding some extra bonuses to the games, including:

SNEG will release the Gold Box Classics via Steam for PC on March 25, 2022. To keep up with the latest news and updates, please visit the official Steam page here.