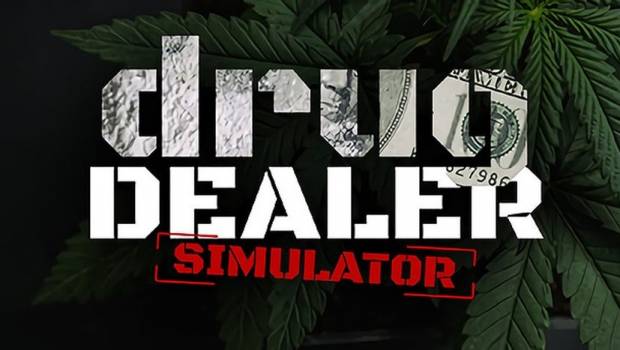 Summary: Good for one or two hits, but don't over-dose!

Like the game, this review is inappropriate for whining B*tches!

Drug Dealer simulator is exactly as the title suggests, it is an interactive first person viewpoint of a non-descript, hoodie wearing drug dealer. The object of the game is to buy drugs from your supplier, and deal drugs to the community, getting them more addicted to your product whilst making money; and sure enough you do.

Set in non-descript dystopian gated community, in a somewhat police state with nightly curfews, you operate within your scummy apartment that is seemingly unfit for human habitation. There is no sleeping, just 24 hour drug delivery, whilst dodging constant police patrols. 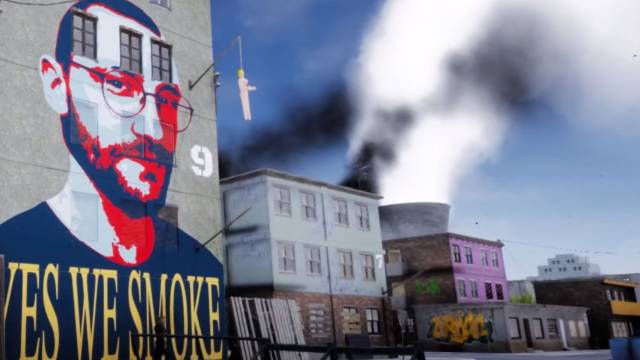 It is only by this dystopian setting that the game stops short of perhaps being too realistic to the point of actual crime training. If it was any more realistic with police behavior and within the setting of a natural city, it most certainly would escape the confides of being a game.

The game starts with your own in-ear coach that guides you through some of the initial phases of the drug dealing enterprise. It is mostly linear in steps and the game does not advance without going through the required motions. At first it is a matter of picking up the stuff from the supplier and taking it back to the apartment to divide and bag it for sale. There can be an initial confusion here as the game introduces the mixing desk and instructions start to back off. The ability to spend cash on sugar and corn starch at the local shop is not helpful early in the game when only spray cans will suffice, so a trap for young-dealers there. 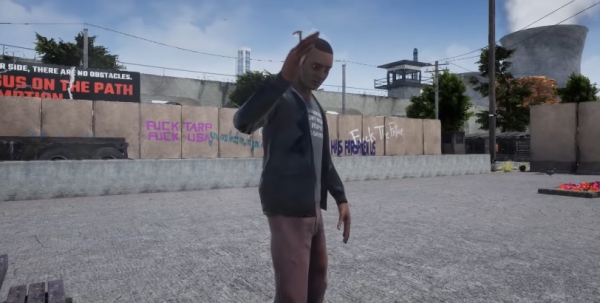 The cartel contact: Aka your mother, father, husband, wife, and F*kn family, yo!

At a certain point in the game you will sell enough stuff to increase your rep’ and unlock further areas of the game map. Once you do of course, you open up new opportunities, such as recruiting your own reseller and becoming your own dealer as well as unlocking more addictive illicit substances. As mentioned, the game is realistic, how so? Well you can give out free samples to gain new addicted clients, you do have to balance the quality of product vs the customer expectations, if you cut the product with too much baking powder well then they won’t be buying from you again. 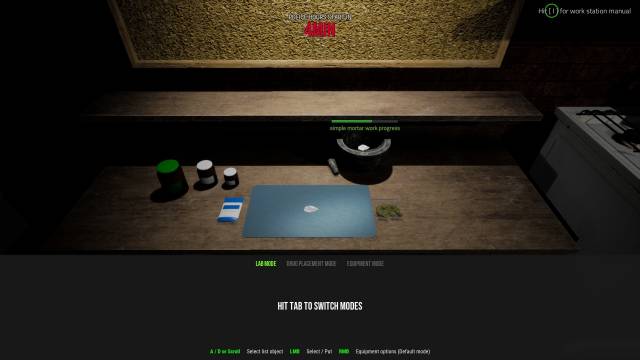 The lab, cut and package your stuff!

The aim of the game is to climb the ranks and become a member of the drug dealing elite, making your living off the suffering of those AI controlled NPC’s.

Speaking of NPC’s, the police are the main obstacle in the game, by which you would otherwise have a free run of it (more or less like real life! SHH). Police regularly patrol the map in groups of two, first only a few easily avoidable patrols but then they increase in number and deviate from fixed paths. During the day and at first, police will take little interest in you, but if you run passed them or keep talking by them they will stop and search you. If you run from police they will chase you and they will remember you, increasing your risk factors and making the game more difficult for you. 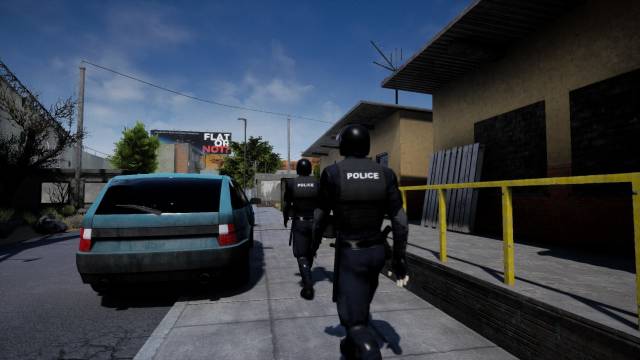 Regular uniform (in every sense of the word) police patrols.

At night however, curfew is on and you are not meant to be out so you will be captured immediately if you are seen. What happens when you are caught with drugs? Well you simply respawn at a corner of the map without your drugs, ready to continue your enterprise. Of course the trick there is to save your game and re-load it thus avoiding all those unpleasant difficulties. 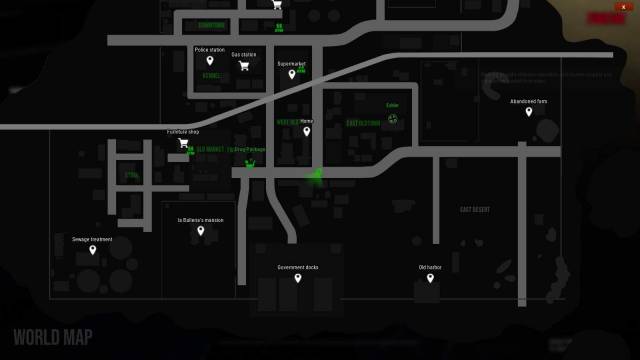 The map, areas unlock as you progress

The game also forces you to conduct drug deals at night otherwise you can’t gain the skills required to advance, so there is no avoiding it. Unfortunately the NPC’s don’t seem to hear the air-raid siren and can openly stand outside waiting for their delivery unmolested by police. It would seem that the police are really only required reading for your characters benefit.

The graphics are using the unreal engine and are fairly well done. Interestingly all of the police have the exact same appearance, and this kind of – in a way – reinforces that separation that is needed, the police aren’t ‘characters’ but just mindless enforcing automatons in this dystopian arena. All of the customers seem to have a unique face and specific appearance, which is good – otherwise the game would be a wash of drones with little buy-in.

The sound is pretty cool, running breathing, door opening etc, all have sounds. Unfortunately NPC’s are not voiced, but rather textual responses are given. The police do have more or less a single voiced fixed phrases, “hey you, stop right there” and a few phrases depending on if you are found with drugs on you. There is also an air-raid siren and announcement that curfew has started, which is announced in English and Spanish which really gives added credibility and buy in and sells the in-game world really well. 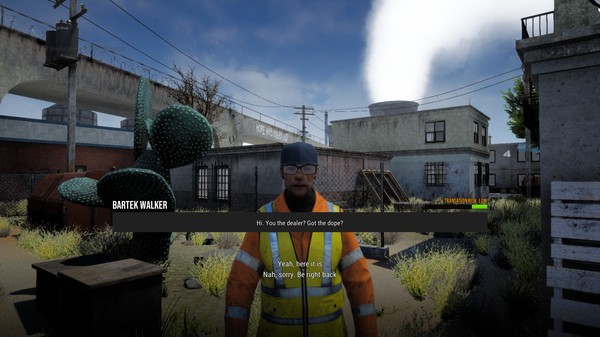 So is it realistic? Well the police profile the character on behaviour and appearance, this is a suspicion multiplier based on recent crime in the area (including drug deals, overdoses etc), if you are carrying a back pack – because nobody carries backpacks in this game so you are suspicious, and your proximity to the police, all of which is a higher multiplier at night as mentioned. The only additional thing needed here would be the shoes, because criminals always have unique or colourful footwear – but that is neither here nor there. 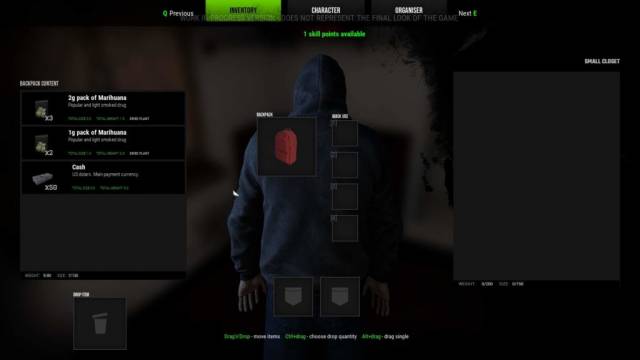 The game employs a skill tree system where you derive points from deals and unlocks, which give you level upgrades. Each upgrade affords some points which can be spent on character attributes, including adding additional pockets to hide things in, speed and agility, speed of client requests, and a multiplier to give a chance that police won’t find something on you in a pocket during a search. Unfortunately, this is a low multiplier and realistically police will always find something in your pocket; but it is just a game.

The principal part of the cartel supplying you, the drug mixing table and measuring is very realistic but simplified for the purposes of gaming, all of the implied boring stuff is removed, so the player isn’t forced to click on stupid tools and do a bunch of busy work, this is absolutely great. The principals are all there and it is scary-accurate. What is more accurate is that requests from clients appear through a secure phone and computer app that is end to end encrypted and IRL remote wipeable. That is how it’s done now days folks. 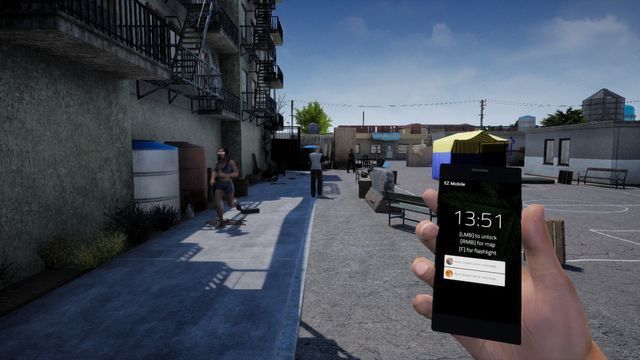 Notifications received on the phone, prompt you to go to the laptop to read the secure message.

This game is quite realistic in premise, but ultimately it is a whole lot of repetitive fetch, with more annoyances than the fun it provides. For example the NPC’s are not overly realistic. The interaction in the drug deal/handover is a canned text response that is cycled and repeats and is not at all based on any specific NPC attribute, so it feels like a mismatch. There is no textual option to interact with police whilst being searched; it would be great if you could at least say you smelled bacon, slept with their mother or something funny or realistic. After playing this game for an hour or so, it is really difficult not to get bored and unenthusiastic about climbing the ranks etc, just to do more of the same busy work but with more annoying and difficult police presence.

Saving the game is only possible at the apartment, so the routine of saving your game and then heading out for a delivery or pickup, is all too repetitive. But should any interaction or event cause a negative effect, it is easier to load the save game and try that delivery again. So avoiding consequences that form a major part of the games substance and playability, ie running, jumping, dealing with police that recognise you, is all consequently avoided. This makes it more boring, but it would be illogical to make the game purposely harder for yourself than it has to be.

This is absolutely one of those games that police , drug users and drug dealers would actually appreciate for various different reasons. It may invoke some serious laughter or a moment of anxiety, but as stated earlier, this game is inappropriate for whining B*tches!

The appeal kind of wears off quickly, but you will value the experience.