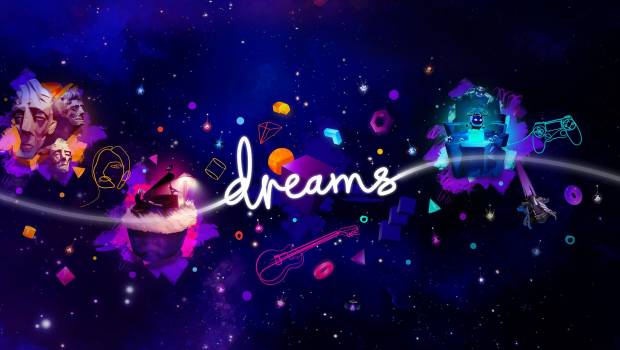 Almost a full console generation since LittleBigPlanet and Tearaway last graced our PlayStations, Media Molecule have raised the bar yet again with the highly ambitious Dreams – and proven the wait was well worth it.

Dreams is, at its core, a powerful and creation engine that lets gamers unleash their creativity with a number of user-friendly tools, share their work with the world and enjoy it with everyone. It’s also a difficult game to review; its sheer scope and unique proposition is not easily summarised in one article.

One thing is easy to state, though: It’s awesome to play, and even more fun to experiment with.

Dreams embodies the ‘Play, Create, Share’ mantra first started by LittleBigPlanet in every aspect, and the end result is a video game that feels like a social network playground. This is a powerful but user-friendly game creation system with limitless potential to sculpt, paint and architect not just entire games, but create animations, mechanisms, music, videos, models and environments, and share those assets with the community to use in their own content. Best of all, the in-game tools to do so are accessible, intuitive and not locked to just those with advanced game development experience. Young and old alike can easily jump in and start crafting something from scratch, or start exploring what other people have made for inspiration.

Navigating and interacting with the many tools and content of Dreams is done via your Impy, a cute little creature acting as your in-game cursor. You move Impy with the gyroscopic sensor of the DualShock 4 (or the analogue sticks or Move Controllers, if you prefer) to use the in-game editor menu that helps you build both scenes and elements to use, either in your own experimental sandbox or to form a complete game or experience; you can place objects and characters into the world, resize them, re-shape them, duplicate them, link gameplay functions, re-shape terrain, and so much more. You can take more direct control in any environment by making Impy possess the objects and characters you’ve placed to actively navigate the 3D spaces and utilise (usually grabbing and pulling) objects of the world you’re in, both in Dream Shaping (creation) and Dream Surfing (play) modes. 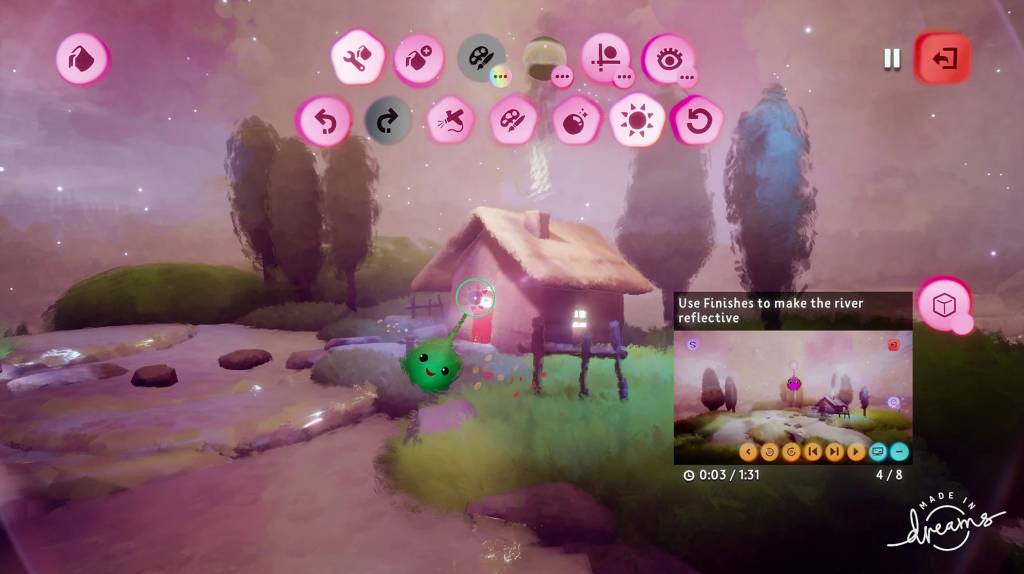 Dream Shaping is arguably the main hook and staying power of Dreams. Whether in a blank scene or homespace – your own personal area to personalise to your heart’s content – you can start filling it with colour and creations via a streamlined menu where you can sculpt shapes, paint objects, craft music and create gadgets, the latter of which acts as the foundation for game mechanics and logic. The most unique thing about Dreams to point out here, is compared to other similar games, you can completely create your own assets from scratch. While initially quite overwhelming, the tutorials on offer, structured as quests, eased me into the prospect of playing around and unleashing my unique brand of creativity at my own pace… which was horrifying, to say the least. Given you can also use premade assets from other already published creations, and there are many masterclasses for advanced techniques, both newbies like myself and the more dedicated can easily make something and have a ton of fun doing it.

When you get around to seamlessly uploading, testing, sharing and playing what you and thousands of others have brought to life, it’s honestly safe to say you’ll be surprised at the level of inspiration and creativity fostered in Dreams. This isn’t just a LBP-esque 3D platformer toolset; there’s first-person shooters, horror-inspired experiences, rhythm games and impressive recreations of existing games already on offer, thanks to a very steady stream of user-generated content. I was surprised to dive into a number of high-quality games by both MM and the Early Access community, with a faithful recreation of Fallout 4’s game engine proving particularly impressive. While the quality of each game relies on the individual creativity and ability of the creator, it proved very fun to experience games of wildly varying scope (from Mario Kart-esque racers to full-blown open-world RPGs) and being able to comment, like and share these games, as well as your own, with the Dreams community (both in-game and out) so seamlessly makes the game’s objective of being a creation community all the more real. There’s so many individual experiences I jumped into with little effort, and the filtering system lets you find not just the popular stuff, but obscure gems as well, fast – of which there were plenty to enjoy. 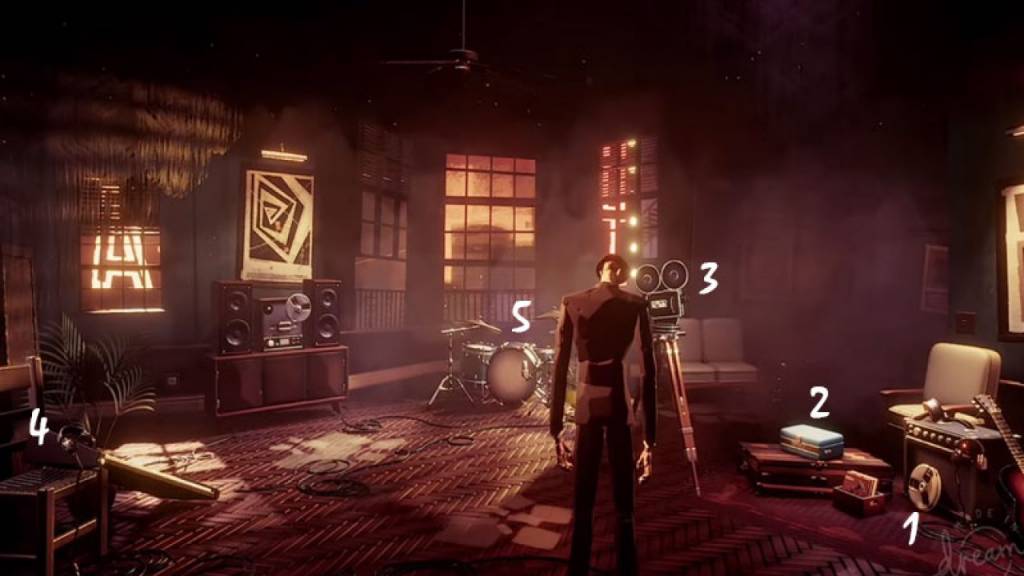 After some opening tutorials, the game gives you free reign to dive into hundreds of player-made creations in Dream Surfing mode. Art’s Dream, Media Molecule’s ‘main’ flagship creation, effectively acts as the main story mode for the Dreams. The titular Art is a somber jazz musician who ran away from his band’s biggest gig yet and is wracked with regret over how he handled things with his friends. Art takes players through a vividly introspective journey through his dark memories and thoughts, represented by three main backdrops. All showcase distinct gameplay styles and genres: A cartoon-like, fairytale world that mostly plays like a traditional platformer; a dark sci-fi land that incorporates puzzles; and a noir ‘real’ world setting that sees Art navigate different environments to examine objects, bypass obstacles and engage in dialogue choices with NPCs, complete with rousing musical performances. As you progress between settings, Dreams constantly shakes things up, introducing fun twin-stick shooting sections, driving sequences and even a tense bullet-hell boss battle.

Art’s Dream is only 2 hours long, but it definitely leaves a lasting impression. The emotional subject matter is melancholy but thought-provoking, the diverse range of game environments and art-styles graphically striking, and the constant mix of different game genres a clever introduction into the sheer depth of Dreams’ many game creation tools and capabilities. Not to mention the inspired and thrilling jazz numbers that fit the story both thematically and visually. I wish Media Molecule offered more substantial, original creations like this at launch, but the bevy of smaller games from MM as well as the catalogue of player-created titles soon distracted me. And while it’s clear many are still learning the ropes of the engine with many experimental games that vary in quality (or are on the verge of memes), the promise on offer is undeniable. There’s even a crazy number of non-game experiences, such as audio-visual tech demos and even incredibly detailed renders of food (no, seriously) that I’ve lost hours in admiring. I definitely have enjoyed more playing than creating, given my lack of talent when it comes to basic character or level design, but Dreams makes me feel able to indulge anyway. 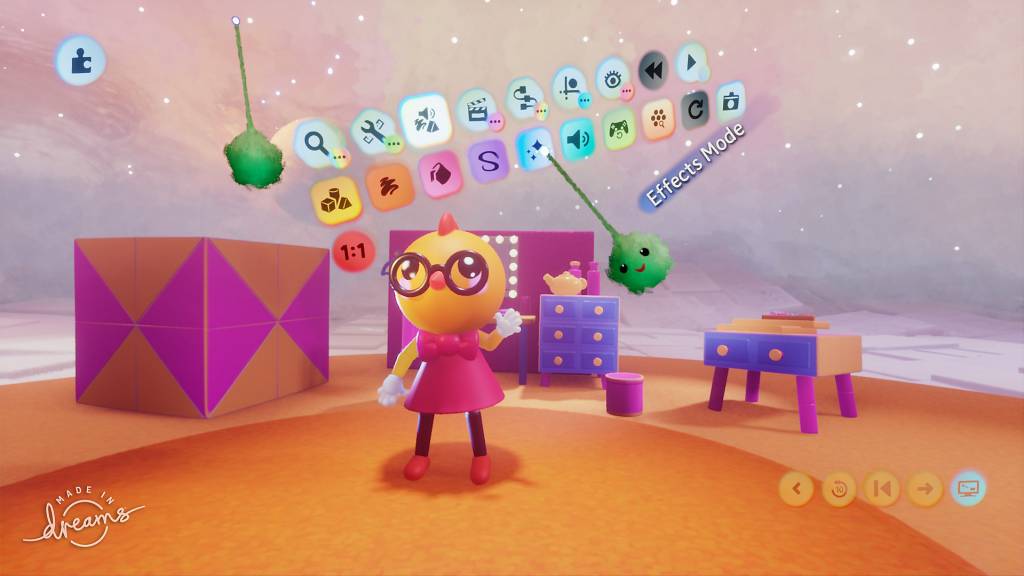 Presentation-wise, Dreams is a sight to behold given the diverse range of art styles and assets on offer to game creators and players. The general aesthetic that pervades most of the games, its menus and tutorials, however, resembles a dream-like experience with abstract visuals, fairy-tale creatures and ethereal environments that encourage players to fill in the blanks (quite literally) with their own creative vision. The sound assets on offer are high in quality and the music in the original Media Molecule creations superb. The game runs particularly well on PlayStation 4 Pro (better performance, resolution and frame-rates) but the base PS4 handled even the most ambitious user-generated content, with loading times across both platforms, despite the complexity and amount of content in many of the dreams, is fast, which made it possible to be able to literally jump in and out of creations, including my own, seamlessly.

Dreams is a one-of-a-kind video game that only comes once or twice a generation, and Media Molecule and PlayStation have definitely delivered the goods. It makes game creation easy for non-technical gamers like me, but most importantly, fun for everyone, wrapped around a community and social sharing network that encourages exploration and experimentation wirth experiences big and small, popular and niche, and everything in-between.

Everyone will have a different experience with Dreams depending on what they’re looking for, but the fact is the creation-focused gameplay here is not traditional and requires an open mind to get the most out of the package. Aspiring game creators will be well taken care of with the in-depth creation engine, as will players looking for endlessly creative user-made content to play for hours on-end, but if you just want a traditional slew of story campaign content akin to what was featured in LittleBigPlanet and Tearaway (which I personally had hoped to play more of, at launch), you may be disappointed.

Regardless, I recommend to any gamer, of any age, even mildly intrigued by the slew of inspired creations to be shared across the Web from creators around the globe to give Dreams a chance, as it really is one of PlayStation’s best and most innovative exclusives to date.