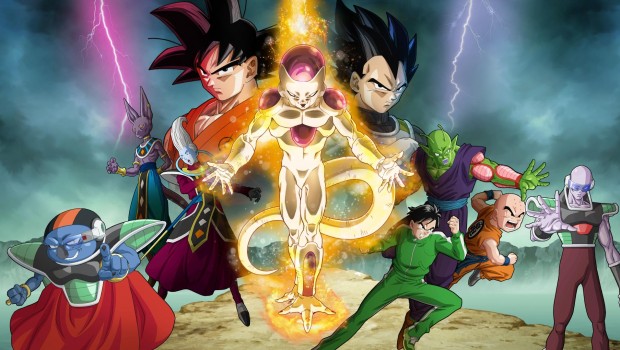 Summary: A worthy double feature in the Dragon Ball canon

After years of dormancy, the premiere shonen title of the 1990s has comeback as a double feature. While the films (Battle of Gods, Resurrection ‘F’) may have been released separately the fine folks over at Madman saw fit to give us this convenient package. For long-time fans these films are like a homecoming and it may even draw new fans into the flock. The mass appeal of Dragon Ball has always been to its benefit but with a series that draws its characterization and story so broadly, has the passage of time begun to show the cracks in its formula? In short, yes, but it’s not without some merit.

Beginning with Battle of Gods, the film that relaunched the franchise, sees Goku facing his strongest opponent yet (not exactly new ground but that’s to be expected): the God of Destruction and lazy, Anubis impersonator Lord Beerus. After being awoken by his fabulous attendant, Weiss, Beerus recalls that he has chosen to awaken at this particular time because of a premonition he had about fighting a so-called Super Saiyan God. As an apparently immortal being Beerus has always lacked a sufficient challenge (living forever gets really boring apparently) and so he figures that now is his chance to find a worthy opponent. Goku meanwhile is continuing his training on King Kai’s tiny home planet but when he gets wind of Beerus’ existence he couldn’t be happier as the opportunity to find a new opponent to break past his limits again has him as excited as a five year old. 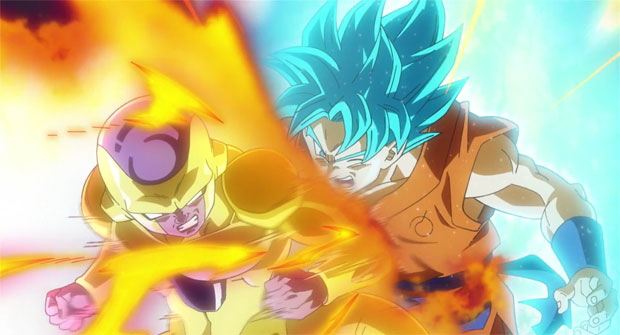 This set-up certainly doesn’t lead to anything thought-provoking but if you were expecting that you’re barking up the wrong tree. However despite how trite cynics might think this concept is this film does succeed in creating a fun, lively and genuinely funny romp that might be one of the best Dragon Ball Z films in the series history. The sad truth of the majority of most Dragon Ball Z films is that they lack the same kind of impact and strength of the main storyline with most of the films exchanging logic and convenience for new opponents and new fight scenes…and not all of those were good either (I’m looking at you Bio-Broly).

So with a pedigree like that, the only place to go is up and Battle of Gods is already soaring above the vast majority of those films if only by virtue of the chemistry between characters. Beerus and Weiss are perhaps one of the best new additions to the franchise in a long time as their casual banter is a great departure from the usual world dominating overconfidence of previous foes. This lends itself well to the comedy of the film which forces the proud Vegeta into a very compromising and uncomfortable position as he is forced to distract the two deities with a good time even at the cost of his own dignity. It’s great to see a character, who are usually so busy worrying about either becoming stronger or his own pride, break out of his shell and show a sillier side of himself. Speaking of silly, it’s hard to feel tense during this film despite the fact that a single annoyance could set Beerus off and accidently destroy the world but’s ultimately not to the film’s detriment as everyone in the cast gets a cameo and a chance to shine, either through comedy or through fight scenes. Unfortunately, there is a largely useless sub-plot involving Pilaf and his tiny companions which doesn’t do much other than to distract small children in the audience.

Onto Resurrection ‘F’, in which the series’ most famous villain (Freeza) returns. The hilariously named misfit minion Sorbet seems to be having trouble managing what’s left of Freeza’s empire and so in a last ditch effort to defeat any and all contenders he sneakily comes to Earth to resurrect Freeza. The tyrant is eager to reobtain his former glory and so begins training to best Goku and company once and for all. It’s in this film that we are introduced to Jaco, another Akira Toriyama creation that’s come to make his cameo, who warns Bulma of the coming threat, which as it turns out, only has one hour to arrive. As if to continue the light-heartedness of the previous film Resurrection ‘F’ seems almost too loose in its merry making. Unlike Battle of Gods, which had the benefit of doing something new with new characters, Resurrection ‘F’ seems to be doing something too safe with too little.

Freeza is one of the series biggest villains and his impact on the series as a whole cannot be understated. I remember the story arc on planet Namek fondly and having gone back to it as an adult I can say that for a shonen story that doesn’t break any molds that it was, without question, one of the best arcs in the entire series and Freeza’s role was a crucial part of it. His presence was always looming in the background when he wasn’t on screen and when he was he made sure that his overwhelming strength was felt by every member of the cast. In the game of cat and mouse that was played during that arc, Freeza was the one big tiger that could have swallowed the entire cast whole if given the chance, so perhaps you can understand my disappointment that he’s been reduced to yet another disposable villain that, sadly, does not get the grand exit that he should have.

It’s difficult to feel that anyone in the cast is in any real danger during this because, in the back of your mind, you know how this is going to play out. Despite both Freeza and Goku obtaining even greater heights of world destroying power the fight doesn’t feel as compelling as it should because the film treats it like it barely matters in the grand scheme of things. It frames the situation, perhaps unintentionally, as just another petty squabble between old rivals with Vegeta hanging in the background not doing much because Goku just wants his turn at defeating Freeza. Yes, this battle that will decide the fate of the universe will be handled with all the respect of a schoolyard brawl.

That’s not to say that there isn’t something to like about this film, all the characters still have great charm and chemistry on screen but it’s in service to a script that downplays its own villain in favour of comedy and largely inconsequential action. The reason why most of the comedy in Battle of Gods worked was that the action orbited around Beerus, who not only provided his own goofy personality for a few witty one-liners, but was also a ticking time bomb that could be set off at any moment. Despite a few detours here and there, Battle of Gods never strayed too far from keeping Beerus in the spotlight while Vegeta and Goku fussed over the fact that despite their incredible strength they couldn’t fight Beerus even if they wanted to. 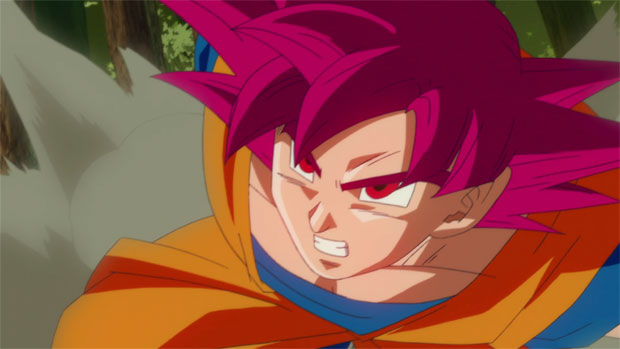 In Resurrection ‘F’, however, there are perhaps just as many comedy scenes but it doesn’t make the overall narrative feel as important as it should. Why is Jaco here only as a glorified cameo? Why is there such little time given to Goku and Vegeta during the first half of the film despite the fact they have such a violent history with Freeza? Why do the rest of the Z Warriors continue the trend of being window dressing, only managing to stall Freeza until Goku and Vegeta show up to clean house? Worst of all is that despite the new transformations from the most powerful characters in the series supposedly eclipsing every other power-up before them, not only does the fight between our two god-like adversaries’ not reach the apocalyptic levels of destruction that you think it would (Freeza does make a habit of being reckless on planets he doesn’t like) but Freeza’s new form suffers from a weakness that only serves to give our heroes a handicap in a fight where they should be fighting for their lives. Still that doesn’t stop the film from being an enjoyable ride with all of these big personalities bouncing of each other wonderfully and the fighting is suitably Dragon Ball Z in its flare.

Back to back these films are a wonderful combination of 90s nostalgia and goofy charm that’s difficult to feel at all guilty about watching. The extras on each Blu-ray include more substainal range of details that some anime series wouldn’t even bother with such as behind the scenes footage of Resurrection ‘F’ on it’s American premiere and recording sessions which show you how each scene was dubbed with the voice actors screaming their lungs out on camera. That by itself almost makes this deal worth it. 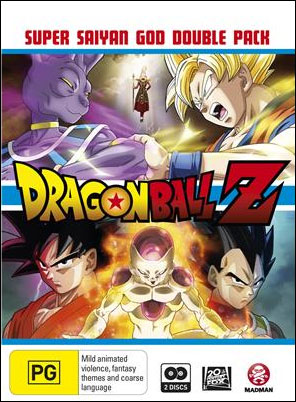