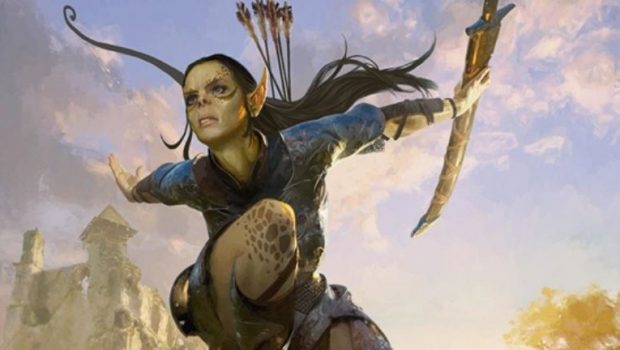 Draft your party and build your legend in Commander Legends: Battle for Baldur’s Gate

Journey to Baldur’s Gate, the most influential metropolis in the Forgotten Realms. A city-state flourishing with commerce, Baldur’s Gate attracts wealth-seeking merchants, penniless refugees and other characters from all over Faerûn seeking opportunity within its massive walls. Featuring D&D icons such as Tasha the Witch, Elminster, and fan-favourite duo Minsc and Boo, Battle for Baldur’s Gate allows players to weave a tale of power and intrigue as you battle your friends in Magic’s most popular multiplayer format.

The latest instalment to Commander Legends offers more freedom than ever for players to build their own legend. A set specifically designed to be drafted, Battle for Baldur’s Gate breaks the Singleton rule of traditional Commander play by allowing for two or more of the same card to be included in a deck.

Elements of roleplay adapted from D&D are also seen in Backgrounds, a new type of enchantment. Legendary Background cards represent the story that brought your commander to the point where we find them now. Each one gives your commander a bonus. Most often, this bonus comes in the form of an ability your commander gains or a boost to their power and/or toughness.

Veterans of D&D can tell you that initiative is important, and it’s important in Battle for Baldur’s Gate as well. Initiative, a new keyword ability, enables three significant bonuses: First, whenever a player takes the initiative, they venture into Undercity (Undercity is a new dungeon card).Second, the player with the initiative ventures into Undercity again at the beginning of their upkeep. Third, several cards in the set get better if you have the initiative.

True to the lore of Baldur’s Gate, the second Commander Legends set sees the return of Rulebook frames. Every Legendary Creature card receives a frame styled to the look and feel of the Dungeons & Dragons Monster Manual, evoking the classic rulebook aesthetic cherished by fans of the tabletop game.

Stunning Borderless frames are also available for certain Mythic Rare Planeswalkers, artefacts and creatures, including five new Mythic Elder Dragons that each embody a colour and a powerful ability.