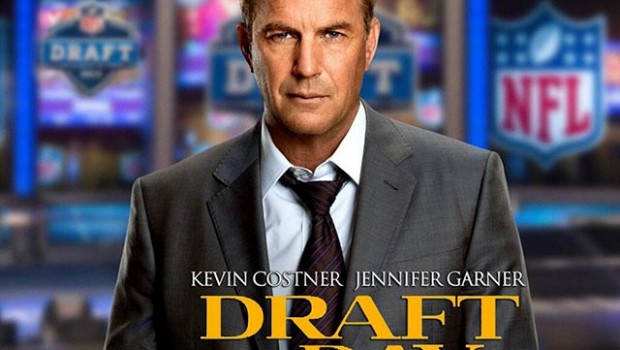 Summary: Although it has its flaws, Draft Day is one of the better sporting films of the past few years.

Directed by Ivan Reitman (Ghostbusters, Stripes), Draft Day is a sports drama that may experience some difficulty finding a market in Australia due to its focus on an esoteric element of a predominately American-centric sport. 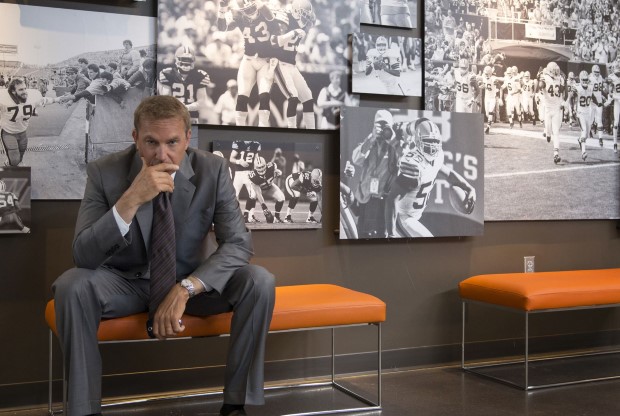 Although it has its fans, the simple fact is that the NFL isn’t the powerhouse over here that it is in America and, as such, the film’s main draw of showing the inner workings behind one of the biggest days in American sports won’t go very far in convincing the average viewer to pick up the film.

Still, with the success of similar films like Moneyball and a plot that focuses more upon the people behind the scenes than the actual sport itself, viewers willing to give Draft Day a chance may find that the film subverts their initial impressions. 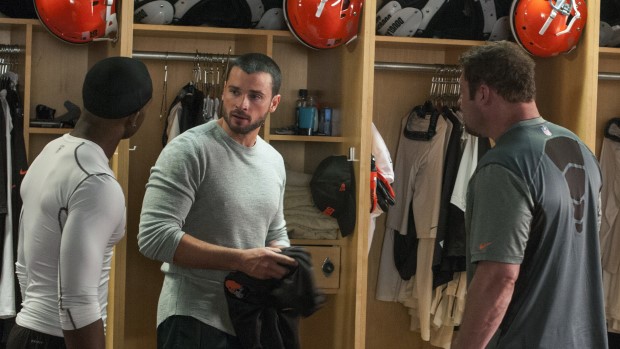 The obvious choice is a quarterback named Bo Callahan, who Weaver and pretty much every other general manager has been eyeing off but Weaver had resigned himself to not having a chance to recruit due to being saddled with seventh position in the draft; of course, now that he’s traded position, Callahan looks like the leading contender. 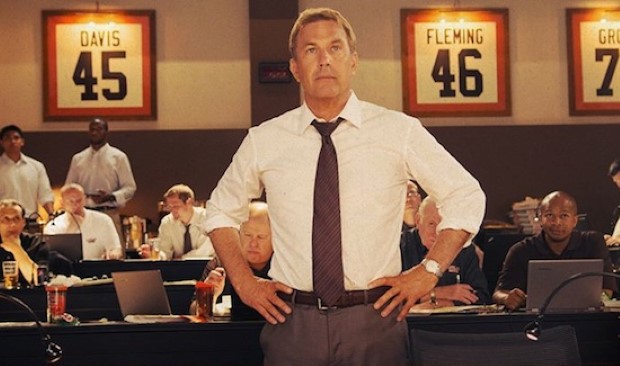 Whilst the team scrambles to make sure that the Brown’s won’t incur any financial losses due to accepting Callahan, Weaver has to contend with the advances of a multitude of other hopeful athletes vying for a place on the team as well dealing with the ramifications of his decision to trade places, incurring the wrath of team coach Vince Penn (Denis Leary) and his partner (And the team’s financial analyst) Ali, played by Jennifer Garner.

On top of all of these character conflicts, Weaver begins to dig into Callahan’s past and finds a few skeletons in the closet that begin to illustrate why exactly the Seahawks were so willing to give up their position in the draft, and by proxy a chance at recruiting Callahan. 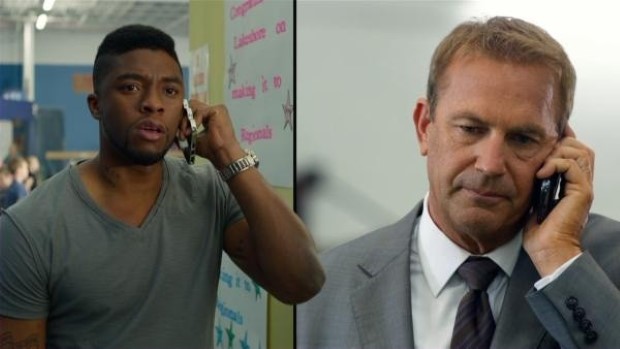 Reitman directs the Draft Day in a restrained manner that occasionally gives way to some playfully quirky visual touches, such as using split screens and then allowing a character from one side encroach upon the other scene. These techniques add a bit of visual flair to what is, essentially, a film about conversations, with a lot of exposition and plot movement being facilitated by phone discussions between characters.

The cast is solid all around and Weaver’s interactions with his mother (Ellen Burstyn) regarding his recently deceased father (Who was also the team’s former coach, until Weaver fired him) add an emotional conflict to the proceedings that serves as a humanistic counterpoint to all the wheeling and dealing. 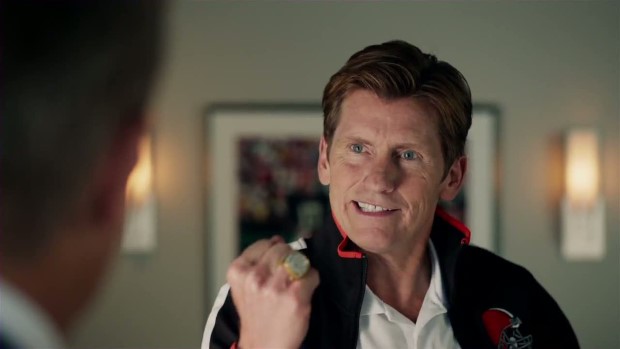 Draft Day Comes with a crisp and clean visual transfer that boasts incredibly fine detail and a naturalistic colour palette that is bright and vivid; the black levels are suitably inky and the image is free of any signs of compression, banding or aliasing.

The audio track is presented via a DTS-HD 5.1 mix that offers a high fidelity sound experience that is immersive and utilises the directionality of surround sound speakers nicely. Although the film is mostly dialogue based, the scenes featuring verbal conflict are robust and take full advantage of the immaculate mastering and the quieter scenes are clear and don’t suffer from audible bleed through between the channels.

Overall this is another solid transfer from Roadshow. 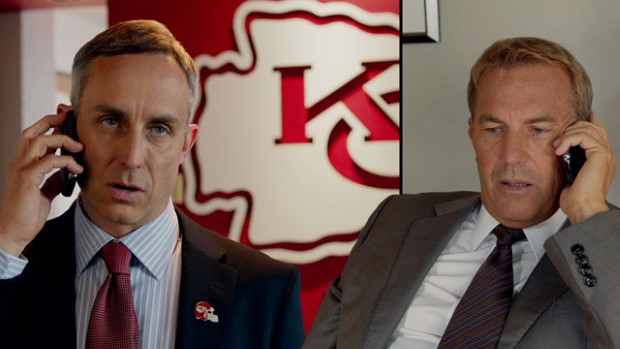 Draft Day’s Blu-ray release comes with a fairly decent selection of supplemental features totalling just over three hours, the most comprehensive of which being the hour long making of featurette; divided into two sections (Charmingly titled “Preseason” and “PostSeason”), this feature looks at the development of the film from its beginnings on the infamous “Black List” of unproduced scripts to the actual process of shooting the film, offering interviews with practically every cast and crew member.

There’s also an audio commentary that, whilst a little dry and partisan at times, offers additional insight into the development of the film that isn’t covered in the making of. Also included are five deleted scenes, a featurette looking at the history of the NFL Draft and a theatrical trailer. 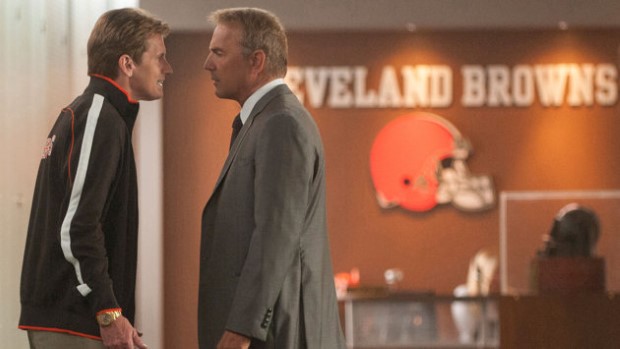 Draft Day is a suitably engaging sporting drama that successfully stands shoulder to shoulder with its contemporaries, with solid performances from a high profile cast and some surprisingly deft screenwriting flourishes.

With that being said, the film is bound to have trouble finding an audience simply because of its subject matter’s lack of commercial potential in markets outside of America; with such a heavy focus on a drafting process that will be alien to much of the local audience, a lot of the film’s tension is noticeably absent simply due to unfamiliarity.

Nonetheless, the human element of Draft Day shines through and the film’s focus on its characters serves to be its strongest point, and the rudimentary elements of the drafting process subtly become evident as the film progresses, alleviating the difficulties in immersing yourself in this depiction of American sporting culture

Although it has its flaws, Draft Day is one of the better sporting films of the past few years, playing kind of like an amalgam of Moneyball and Jerry Maguire, and even if you have no interest in the NFL it makes for interesting viewing and succeeds solely on the basis of being an engaging character study that just happens to be set against the backdrop of professional sports. 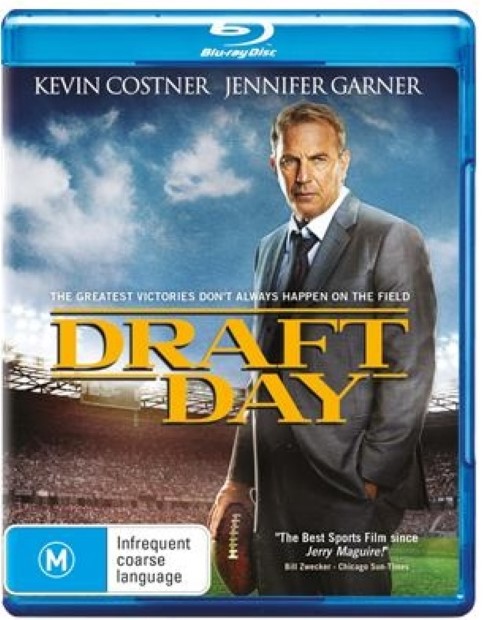