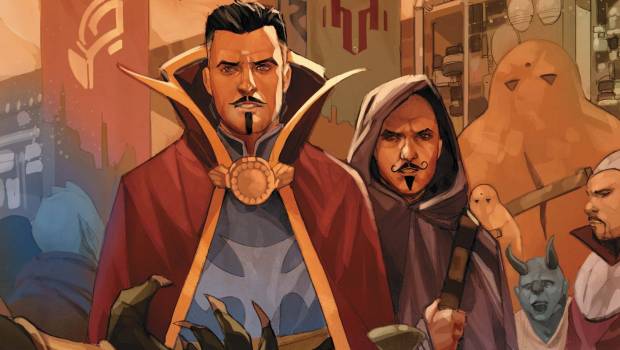 Summary: When he finds someone has been using his magical forge to make black market weapons Dr Strange is determined to get to the bottom of it.

Detective Strange to you!

After defeating two troublesome enemies armed with powerful magic weapons, he finds that they were made on his own magical forge and sold via the black market. He decides to travel to the interdimensional black market in disguise as a demon as he knows he will be attacked on sight as he has fought most of the beings there. Will his plan succeed or not?

I have heard a lot about Dr Strange but had never really read any of his comics. There is a cross over in one scene where he visits the Strange Academy to get some background information on the situation but they do not repeat the scene of him fighting a monster so it must have been afterwards.

Of course you will get the most out of this one if you are already following the story but it seemed easy enough to pick up as I went along and does seem to be leading to bigger things.

With no new Marvel movies coming along for a while and even comic books only just starting up again it will be good to explore some more of these stories in detail.