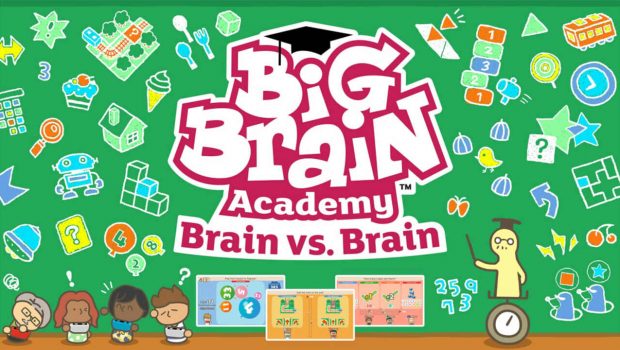 A new free demo for Big Brain Academy: Brain vs. Brain for Nintendo Switch is available to download right now in Nintendo eShop. In this new cross-generational multiplayer* party game that anyone can play, players can boost their skills and speed by practising certain activities while also having a blast.

In the demo, players can trial Stretch mode, featuring a sampling of puzzles that will test their abilities in three brain-bending categories: Visualize, Identify and Compute. The full game includes even more puzzles, including the Memorize and Analyze categories. Early purchasers can pre-order the game today from Nintendo eShop.

It will also be possible to take Party mode for a ride. Up to four players* can go brain vs. brain to earn the most points by completing activities quickly. Each participant sets their own difficulty from easiest (Sprout Class) to the most challenging (Super Elite Class), which means even the youngest kid can compete comfortably with adults in the family.

No academy would be complete without a professor, and the distinguished Dr. Lobe returns to Big Brain Academy: Brain vs. Brain as your host. For those who purchase the full game, even more modes are available, such as Test mode, where players will run through a gauntlet of five activities. Dr. Lobe will award you with your Big Brain Brawn score based on your performance, which will help you earn in-game coins, which can be used to unlock costumes for your avatar.

If you need to train before the next match, there’s always Practice mode, where anyone can replay their favourite activities to try to earn high scores and medals. To see how your lobe stacks up across the globe, hop into Ghost Clash mode** and compete against other users’ data. Players can compete against others on their friends list, family members who have profiles on the same Nintendo Switch console or even friendly competitors worldwide.**

A new free demo for Big Brain Academy: Brain vs. Brain for Nintendo Switch is available to download now. In the demo, players can trial Party mode and Stretch mode, which features a sampling of puzzles that will test your abilities in three brain-bending categories: Visualize, Identify and Compute. The game launches on Friday 3rd December, and players can pre-order the game today from Nintendo eShop.