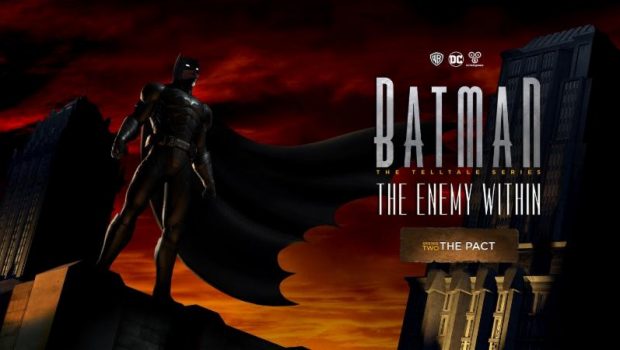 Download the Official Trailer for Episode Two of Telltale’s ‘Batman: The Enemy Within’ Ahead of Episode Premiere and Retail Release on October 3

Today we are excited to share the official trailer for episode two of Batman: The Enemy Within, a new five-part episodic game series that continues Telltale’s unique take on the Caped Crusader. You can download the trailer by following the links above.

The death of a villain at the hands of a mysterious assassin was just the beginning. As explosions rock Gotham, Batman races to meet a new foe, but encounters a force that may cause even the Dark Knight to fall. In the guise of the billionaire, Bruce meets John Doe’s ‘friends’ and becomes enmeshed in a plot where the only way out is to go deeper in. But at what cost?

Episode two, ‘The Pact,’ launches October 3 on Xbox One, PlayStation 4, PC, and Mac. In addition, both episodes one *and* two will become available on iOS and Android-based devices that same day. Going forward, new episodes will launch the same day on all platforms.

A special ‘Season Pass Disc’ for Xbox One and PlayStation 4 will also be available at retailers starting October 3 in North America and October 6 in Europe. The disc includes the first episode of the season, as well as download access to all subsequent episodes as they are released.

Batman: The Enemy Within will be a standalone product separate from the first season of Batman: The Telltale Series and is licensed by Warner Bros. Interactive Entertainment and based on DC’s iconic character. Episode two, ‘The Pact,’ has been rated ‘Mature’ by the ESRB.