Summary: The ambiguous nature of the story won’t appeal to those who prefer definitive conclusions but I personally love films that promote discussion and examination of the story elements after the credits roll.

Following in the wake of the release of another Doppelganger tale, Enemy, it’s not surprising to find The Double constantly compared to Denis Villevue’s slickly subversive take on sexual infidelity and identity, but aside from sharing the same central conceit, that of a man faced with an exact replica of himself, the two films couldn’t be more different in tone or style. 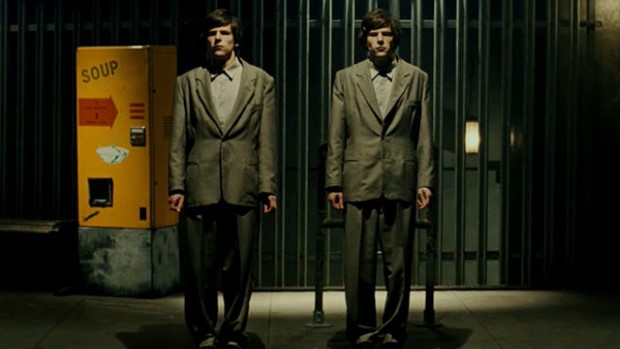 Where Enemy was a brooding, disorienting piece of surrealist cinema, The Double is more accessible, with a comedic tone that serves as a counterpoint to the austere visuals and solemn subject matter of loneliness and loss of identity.

Directed by Richard Ayoade, probably best known for his role as Moss in The I.T Crowd but also for carving out a name for himself as a talented director with efforts such as music videos for bands like Arctic Monkeys and his critically acclaimed debut Submarine, The Double takes its inspiration from the Dostoyevsky novel of the same name but deviates quite drastically from the source material. 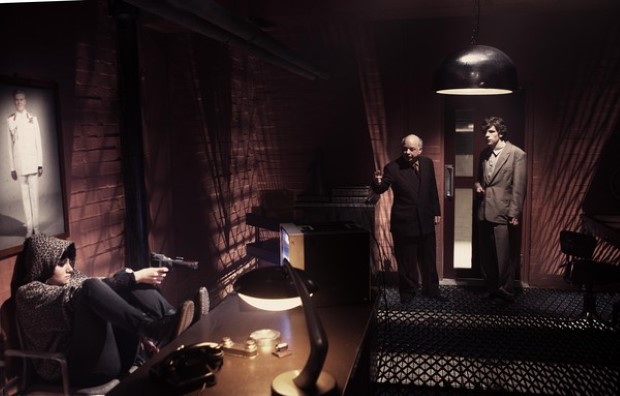 Set in a drab bureaucratic dystopia reminiscent of that shown in Terry Gilliam’s Brazil, The Double introduces us to Simon James (Jesse Eisenberg), a lowly office worker who spends his day toiling in a nondescript cubicle for a nameless corporation ran by a CEO known as “The Colonel”.

Simon seems to be fighting a losing battle against the world in almost every facet of his life; Machinery revolts against him, strangers force him to move from “their” seat in a completely empty train carriage and each day he’s forced to sign in as a visitor to his place of employment as his ID card no longer works and the guard who Simon has seen each day since he started working for the company seven years earlier constantly fails to remember who he is. 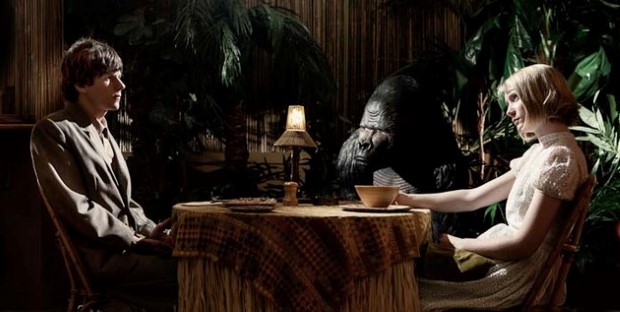 World weary and dejected, the only real high point in Simon’s life is the brief encounters he shares with copy assistant Hannah (Mia Wasikowska), although they usually amount to little more than Simon shyly watching her from afar, even going so far as to set up a telescope so he can observe her from his apartment across from her building.

After witnessing a man leap to his death from her building, Hannah and Simon finally introduce themselves formally and they arrange to attend a mandatory workplace ball together. 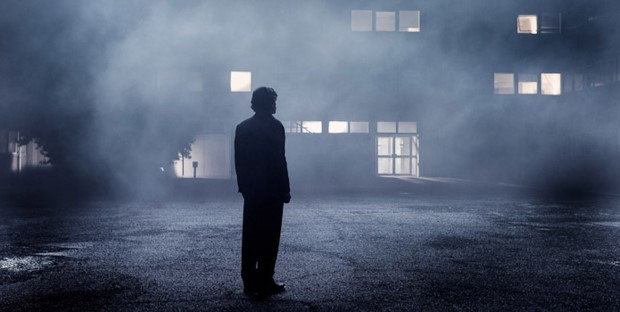 However, the arrival of James Simon, a new employee who looks identical to Simon, threatens to derail Simon and Hannah’s potential relationship. Much to Simon’s chagrin nobody even notices that James is identical to him and his double’s self confidence and amicable personality soon sees him quickly ascending the career ladder and attracting the affections of Hannah.

Although Simon and James initially form a tenuous friendship, conflict soon arises and Simon finds himself plunged into a nightmare where he has to fight for the life that he previously viewed as worthless before it’s usurped by this charismatic interloper. 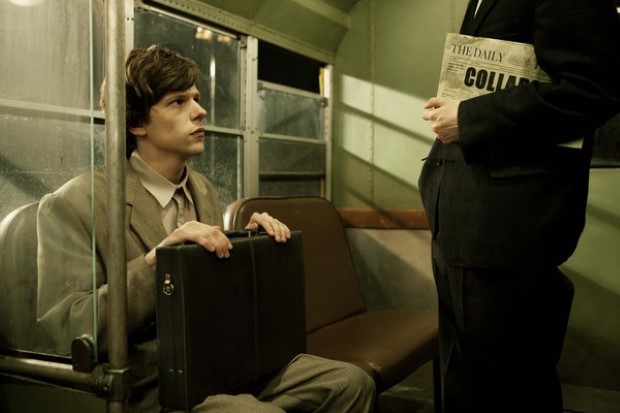 The Double revels in the ambiguity of its story, which may deter some viewers, but I personally found it to be an entertaining look and darkly comic take on a man struggling with an identity crisis. Simon’s longing for the qualities exhibited by his double is almost tangible and Eisenberg ably carries the challenging dual roles with believability. The film also features a lot of little surprise cameos, such as Ayoade’s The I.T Crowd co-star Chris O’Dowd, Musician J. Mascis and a welcome, if brief, return to the screen for Chris Morris (Brass Eye), one of my favourite comedians.

Visually The Double shares a lot of similarities with Gilliam’s Brazil, such as the retro machinery and claustrophobic cubicle farm, but tonally the films are quite different, with The Double showing an internal struggle rather than depicting a man fighting against an oppressive regime. Ayoade’s wry sense of humour is on full display here and, when used in conjunction with the dystopian themes of the film, serves to make for an effectively unique viewing experience. 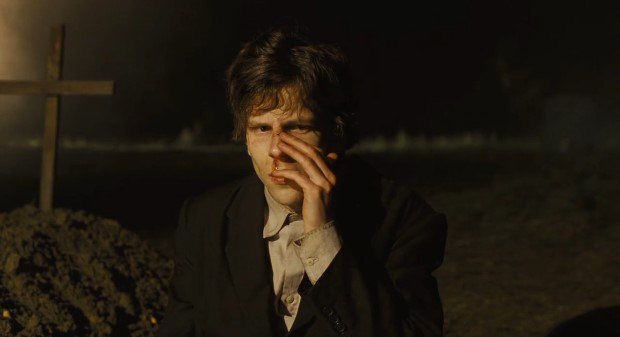 The Double comes with a splendid transfer that boasts strong blacks that contrast nicely with the dull, almost monochrome colour palette of the set design and the vivid streaks of red or blue that occasionally punctuate the image. The film is dreary and drab by design so as to show the uniform quality of the world that Simon lives in and the disc transfer perfectly complements these aesthetic choices. The image itself is crisp, clear and overlaid with a faint grain and doesn’t suffer from any visible signs of compression or aliasing.

The Double’s audio comes in a 5.1 DTS-HD lossless track that is one of the more memorable I’ve encountered. The film utilises ambient sounds to create a sonic assault on the sense that is efficiently unnerving, setting the viewer on edge throughout; the amplified ticking of a clock, the roaring whirr of the copy machine, the echoing footsteps that persist even after the characters have stopped moving – The sound design is superb and once again harkens back to the efforts of Terry Gilliam on Brazil.

Overall this is an exceptionally accomplished transfer from Madman. 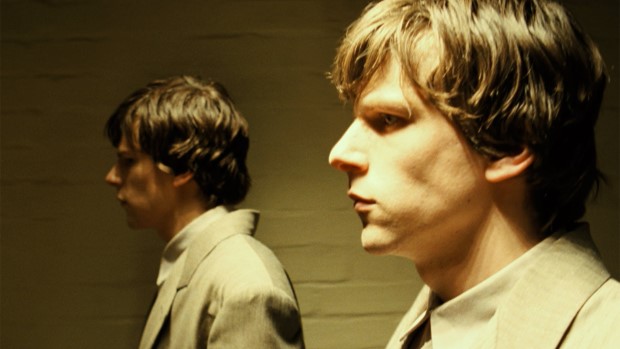 Whilst watching The Double, every quick glimpse of the in-universe television series The Replicator featuring Paddy Considine made me hope against hope that the footage would be available in the special features in all of its lo-fi, synth soundtracked glory, much like Considine’s efforts on the Submarine release.

Thankfully The Double doesn’t disappoint in this respect, although overall the supplemental features are rather slight, with only three deleted scenes, a commercial from the company Simon works for and a Making Of rounding out the release. The Making Of features interviews with Ayoade and screenwriter Avi Korine (Brother of Harmony) as well Eisenberg and a pair of producers and covers what drew them to the story, how the shots featuring the characters of Simon and James were achieved and more, although the brief running time ensures that fans will be left wanting for a more comprehensive overview. 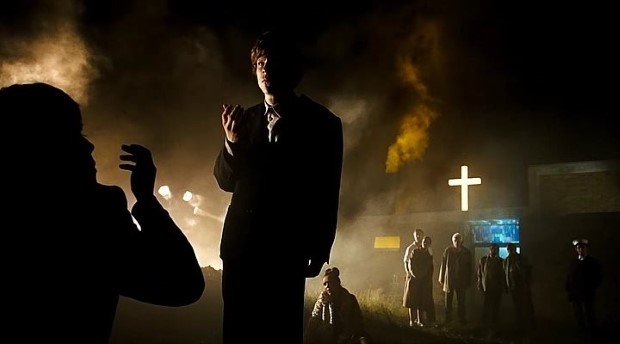 Overall, I really enjoyed the double and found it to be a much more rewarding viewing experience than Enemy, which I was also quite fond of but found to be deliberately abstruse and thematically impenetrable at times. The ambiguous nature of the story won’t appeal to those who prefer definitive conclusions but I personally love films that promote discussion and examination of the story elements after the credits roll.

The understated absurdist humour contrasts nicely with the hopelessly grim outlook of the film and it’s never entirely clear what exactly the nature of Simon’s doppelganger is, as what can be construed as purely psychological is paradoxically externalised and acknowledged by the other characters.

If you’re looking for a slickly shot, intelligently crafted examination of what personal identity amounts to in a faceless, lonely world and how one would react when that last remnant of self is forcefully snatched away from them, then The Double will more than satiate your desire. 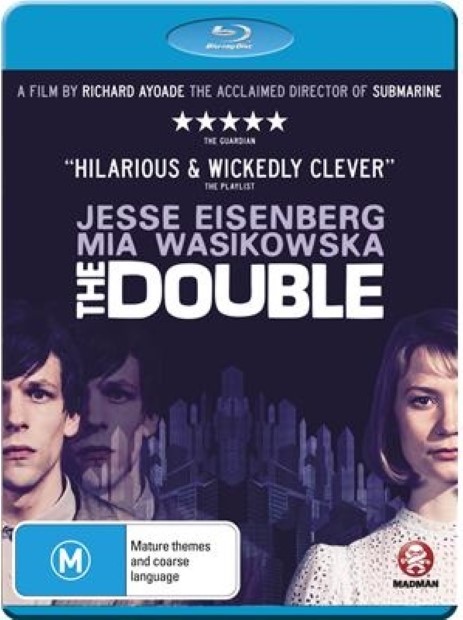