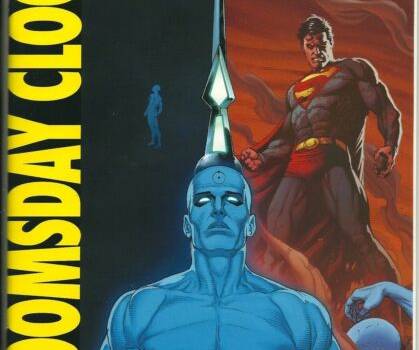 Summary: The book was great in all respects... the problem lies in the idea that it would have been better a year and a half ago.

Background: 2 years and 12 issues and nothing matters in the end…

The Story: Ozymandias enacts his final plan. Batman confronts Rorschach and apologizes for not believing him. All hell is breaking loose in Washington as Superman talks to Manhattan. Lex Luthor and Lois Lane retrieve a vibrational frequency gun and Superman finally charges at Doctor Manhattan… and then something unexpected happen. After all that, Superman wasn’t aiming at Doctor Manhattan. He was protecting him from an unseen attack. Manhattan couldn’t see the future because he couldn’t conceive of the possibility of Superman saving him and offering to work together. That stuff just didn’t happen on his earth. Manhattan then messes with reality one final time.

The lantern is moved back into view so Alan Scott doesn’t die and he becomes the Golden Age Green Lantern. Superman lands near The Kents. Clark is off to prom, but this time instead of getting run off the road, they run into Superboy. Superboy has officially been re-introduced to continuity! As Ozymandias watches on, Jonny Thunder hears a voice telling him that he didn’t lose the thunderbolt… he IS the thunderbolt. He says the magic words and disappears. As Superman is being pummeled, a telepathic bolt knocks the villains away and he recognizes Imra. The following then occurs:

With those words, EVERYBODY is back. The whole Legion of Super-heroes, the JSA, second and third generation heroes, all of them. Manhattan relates to himself (and us) the history of the DC universe as of now. COIE occurred, everything has occurred. Apparently, whenever the universe is rebooted, the multiversal system automatically saves a copy of whatever Earth there is as a prime Earth. That means that somewhere out there, the New 52 exists.

Then it gets really interesting. Jon sees the future. In the year 2020, the vestigial energies of the old gods screws with Clark’s timeline again, rebooting reality. In 2025, a crisis dubbed “Time Masters” occurs and everything is set right again. Then in 2026, Earth 5G is created, where the sons and daughters of the heroes have taken up the mantles of their parents. In 2030, the “Secret Crisis” happens where Superman fights THOR and the rest of the Marvel Universe. Then in 2038, 100 years since Superman first appeared, it will all start over again.

Ozymandias actually gloats that his plan worked. His plan all along was that Superman could teach Manhattan about hope and give him the motivation to save THEIR world. Just before the Watchmen characters depart, The Comedian shoots Ozymandias, Luthor shows up and shoots The Comedian with the vibrational emitter gun. This sends The Comedian back to the moment before his original death. Manhattan then takes Mime’s baby as his own and after raising him for a bit, gives him the rest of his powers before ceasing to exist.

The comic ends with Manhattan saving Carver Colman from his fate, as well as the whole Watchmen Earth, The Kent’s meeting Clark and Lois, and Manhattan adopting and raising Mime’s son as his own, eventually giving him the remainder of his powers before fading away. On the Watchman Earth, the Dreiberg’s door rings and it is a young boy named Clark, who was sent to live with their family.

Writing – It may have taken forever, but the writing in this book (as well as series) has been spectacular. Geoff Johns obviously loves this property so much and he knows these characters inside and out. Giving Clark back his hope was a given; after many years of shades of grey from the character, he finally is written as being truly happy.

The “big damn hero” charge was awesome. With 3 words, Geoff Johns closed the book on rebirth and brought everybody back… sort of.

Here’s the largest negative from the book: NONE OF IT MATTERS! It would have mattered if the company was able to release the book on time or, I don’t know, had actually stayed the course and followed the path Geoff Johns left for them. BUT NOOOOO… DC once again decided to go in a darker direction, where the elements of rebirth were quickly quieted down. This book was so late and the Rebirth initiative ended so soon that this has (as far as I can tell) been slightly excised from continuity. Vague mentions of someone messing with time still pop up in certain books, like Scott Snyder’s -great until the finale – Justice League, and the Flash, which has been written by Joshua Williamson from the beginning. Beyond those to titles though, the missing heroes and links seem to be coming back in totally different ways.

Artwork – The artwork is great. Gary Frank has done a fantastic job of hard jawlines and soft features. Getting the chance to draw the Watchmen characters obviously was fun and exciting for him. Brad Anderson knows when to make colors pop and when to tone them down. The books color brightens significantly after the heroes return, which is a nice dichotomy to the sadness and dreariness of what came before.

Final Thoughts? – This would have been a perfect endcap. The book is brilliant in all respects, but now none of it really matters. DC botched the landing on the end of Rebirth and it makes me quite fearful for the 3 Jokers book we will eventually get.