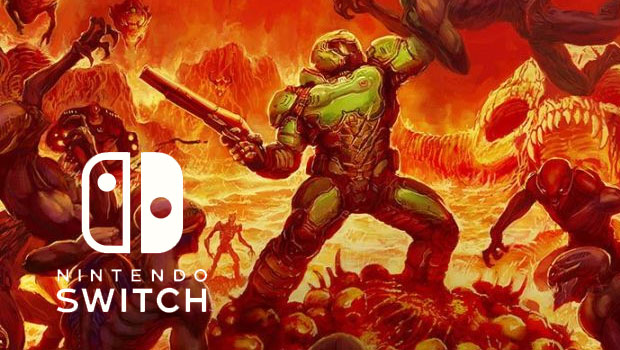 In collaboration with Panic Button, iD Software have brought one of the greats to the Nintendo Switch with the amazing modern remake of the classic game DOOM, which plays as well (almost) as the PC and high-end console versions but unlike the aforementioned systems, this version can be played on the go or on the big screen.

It’s also uncanny that the original game was released way back in 1993 when Bill Clinton was President, Jurassic Park was released and Intel released their powerful Pentium Microprocessor… and Nintendo had the Super Nintendo Entertainment System! Yep… Doom is that old!

However this current incarnation channels the original well with its fast paced and no holds barred first person shooter action that also has the violence turned up to the next level, especially when it comes to gibs. Speaking of gibs… err gigs, the download is around 22GB if you purchase this via the Nintendo Shop. 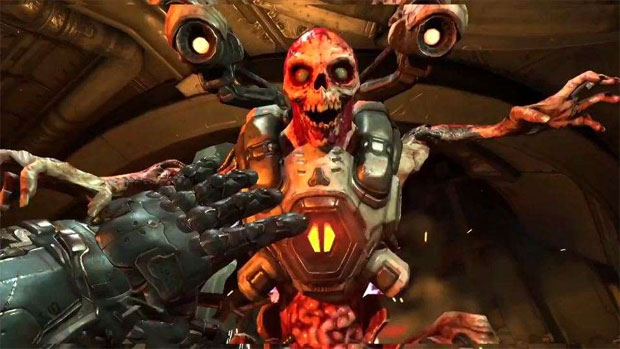 Like the original, the Nintendo Switch interpretation of Doom supports both single-player and multiplayer with the main campaign taking around 10 hours to successfully complete as gamers are transported to Mars with the Union Aerospace Corporation (UEC) thrown into turmoil *again* as they are overrun by an invasion from hell.

Also like an ouija board, you don’t @#$ with demons but the UEC obviously didn’t watch horror films. So even though the story is cliched and over the top, it’s still fun to play as you’re destroying the demon hordes from the depths of Hell as DOOM GUY! 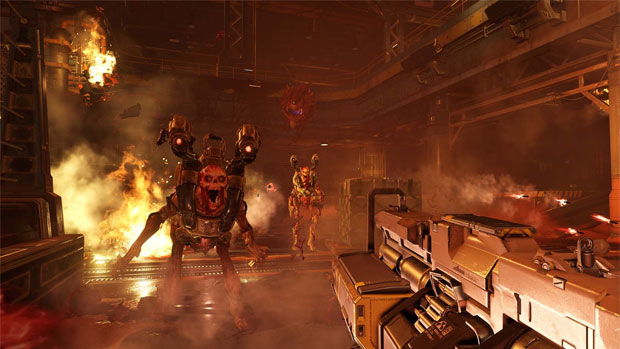 From the very first minutes of gameplay of Doom, it’s like coming home again (We’re home Chewie) and being a veteran gamer, the developers not only pay homage to the original but ensure that the title has been injected with some next-gen mechanics and love.

Needless to say, Doom is still quite fast-paced, filled with an almost never ending hoard of enemies and weapons that could easily take out a small moon. Thankfully there are plenty of health packs, ammunition and power-ups which are definitely needed, especially with the bosses.

Oh, there’s been some criticism about the resolution of Doom on the Nintendo Switch with 30 frames per second at a resolution of 720p, however I found this quite acceptable to play which of course looks way better in the handheld mode. 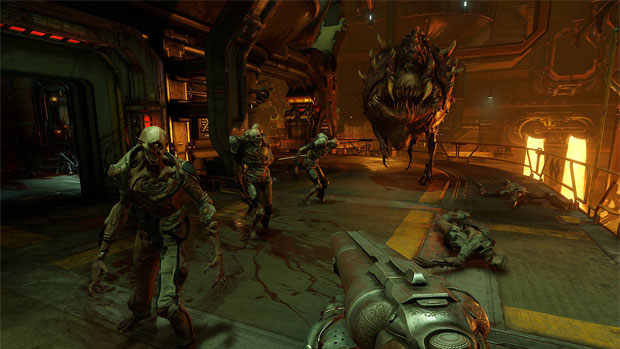 In terms of mechanics, some newer gamers may find the gameplay of Doom a little antiquated which does rely on the run and shoot system of the original first person shooters. This is not to say that the system is bad but it does harken back to a simpler time but given that I’ve been involved in first person shooters since the onset, I found it quite refreshing, particularly the fast-paced action.

Given that, the AI isn’t the most intelligent and if you do increase the difficulty, it can be brutally punishing at times. In terms of modernising the franchise, the developers have added a weapon and armour system which allows you to upgrade these items which increases the strategy of the title and many of the weapons and bonuses (e.g. runes) are hidden off the beaten path. 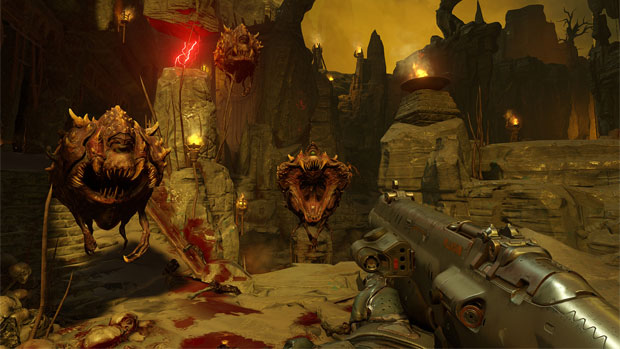 When it comes to weapons, Doom delivers and man does it deliver! Just like the original game, you’ll have access to your trusty chainsaw plus other fun weapons like the plasma cannon and the chaingun. However nothing is more fun than using the shotgun to blow your enemies back to hell that not only has this grunty feel behind it but it feels quite powerful as you cock-it and shoot. Add in another classics like the rocket launcher and the handgun and the spawns of Hell better watch out. Then you have the BFG 9000 and its acronym is true to its name as you literally lay waste to your enemies and see the health of your enemy bosses drop.

To help keep things a little fair, the enemies in the game are quite diverse from your standard demonic grunts to more powerful foot soldiers but where the AI succeeds is by swarming the player so you need to make sure this doesn’t happen. The characters designs also looks outstanding and really makes it appear like they have crawled out of some demonic pit. 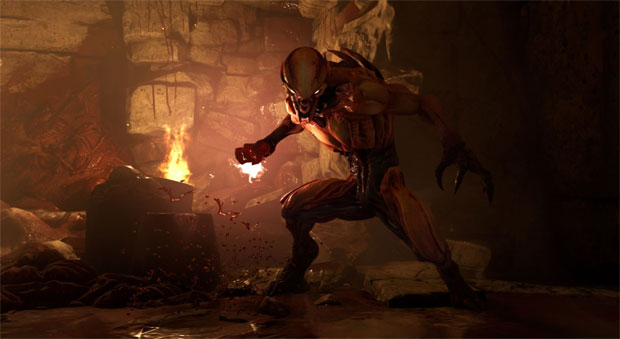 As the game progresses, you do start to engage in more and more powerful enemies and the creature design is literally to die for, especially the end boss. Another cool element of Doom are glory kills and when you reduce the health of your enemies to a certain level, you can then perform a melee execution.

More importantly and when you engage in this mode, you are made invulnerable for a few seconds and more often than not, your enemies will also drop some much needed health. For controls, you can use the Joy-cons, however the Pro Controller is the best method and you can use the motion controls or right analog stick for glory kills.

For lovers of multiplayer, Doom supports a very sturdy online system that is just as fast paced as the single-player mode. There’s plenty of maps that are also diverse and it won’t take long to find your favourite hidey holes in the handful of online modes. Another mode besides campaign and multiplayer is the arcade mode which uses a score based system. 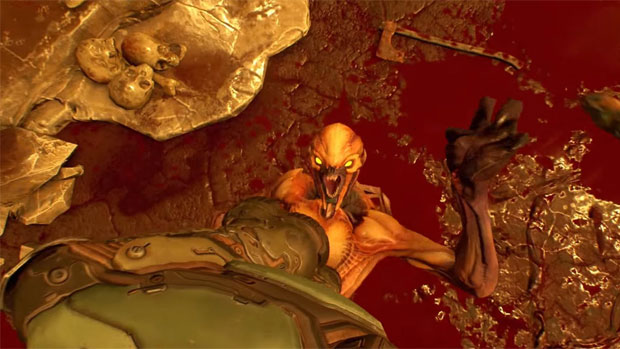 Graphically, Doom looks pretty damn impressive on the Nintendo Switch and does add some great lighting, special effects and explosions which are very impressive and when matched with the level design and character creations, this is one solid looking game.

Then you have the sound which boasts this industrial rock soundtrack that has parallels to the original game, especially the iconic Doom track. Sound effects are equally as good and the demons from hell just sound frighteningly scary. Voice acting is a little clichéd but once again suits the premise of Doom. 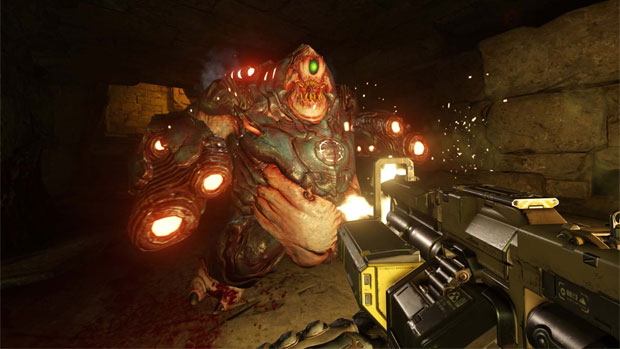 In the end, Doom is a worthy successor to the original and although there was mixed reviews of Doom 3 way back in 2004, id Software should be praised on not only paying homage to the original but successfully rebooting the franchise on high-end consoles, the PC and now the Nintendo Switch.

Sure, it’s a little old school at times but that was also the beauty of the original and if you’re looking for a fast paced first person shooter then Doom is the game for you. Yes, the game is quite linear but there’s plenty of secrets to be found which definitely gives you incentive to either explore all the levels totally or play the game again, so Knights of Hell beware! 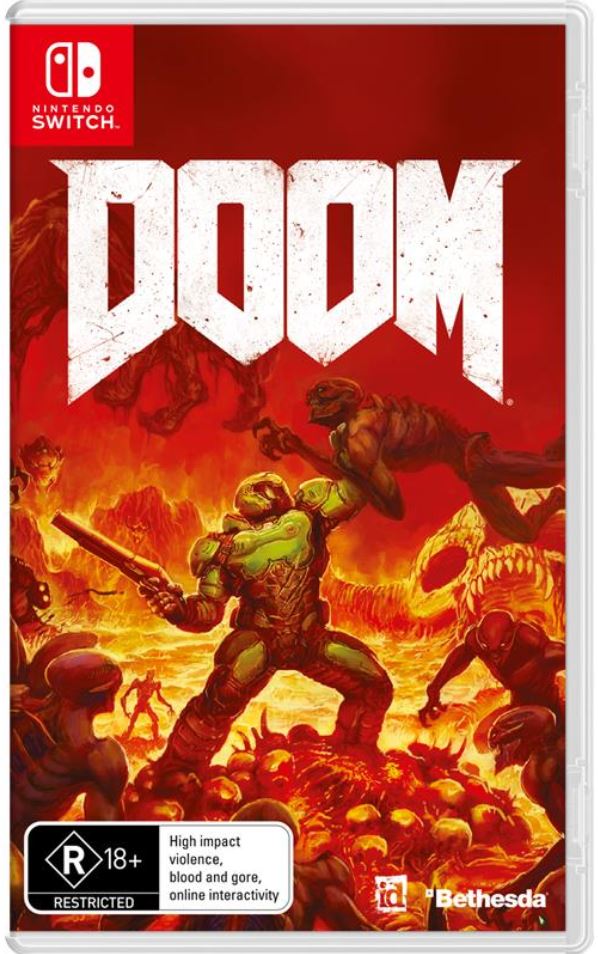