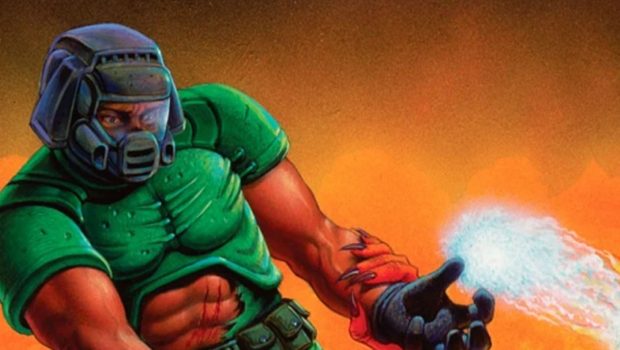 Summary: The best version of the classic Doom games and its portable.

Doom 1 and 2 are Classics in every sense of the word. This Nintendo switch port is no different. This might be one of the best ways to stand up against Hell and its army.

Doom 1 and 2 are the industry changing and foundation building FPS shooter from the early 90’s. Dark corridors packed with demons and possessed soldiers. With Metal music pumping in the background and your shotgun lighting the way and clearing a path. You fight Hell for Earth and to avenge your beloved rabbit Daisy. 2D sprites in 3D environments created a very cool and scary setting that had the world going crazy. Doom 1 and 2 were and still are very much celebrated to this day. So, of course just about every system has had a port or some sort of version on Doom with varying degrees of success. Yet more than 25 years after the original Doom hit MS-DOS it has been ported over and after a few updates. We finally have a near perfect version of a Classic ready to be played on your TV screen or on the go. Exciting times we live in. 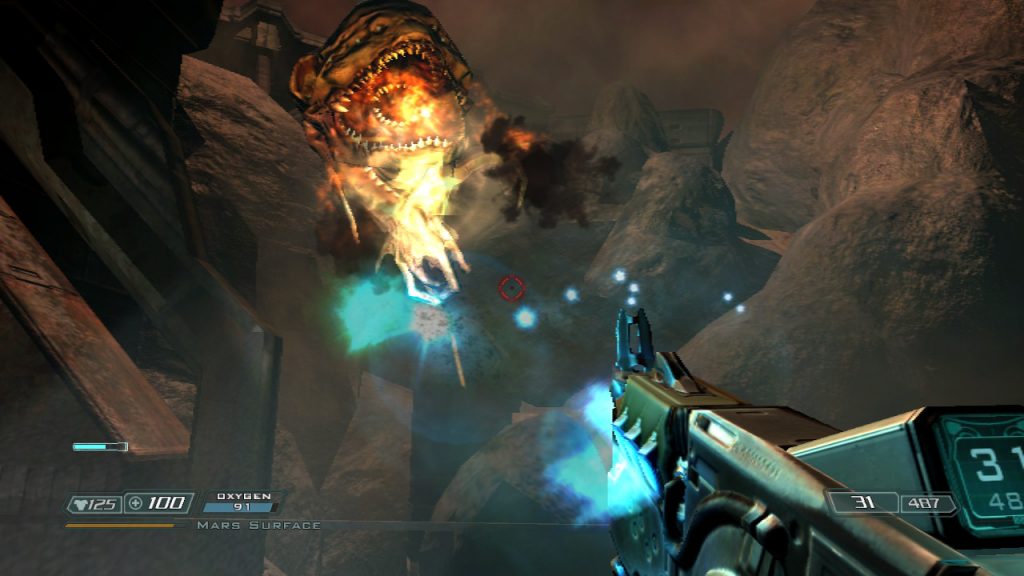 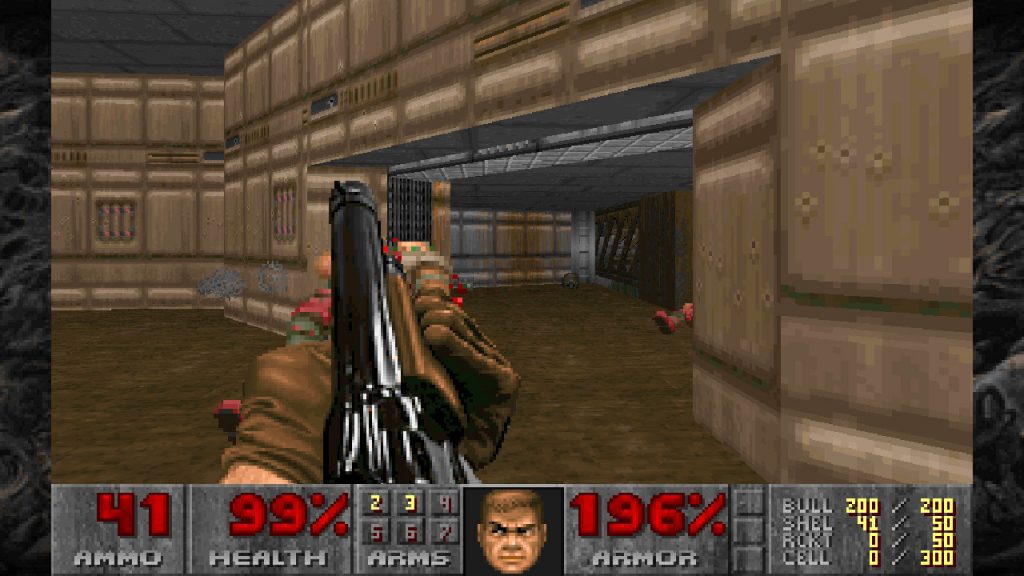 Let me start off with the Gameplay.

Doom plays like the original. You still shoot everything on the screen with a variety of weapons from a pistol, shotguns, rocket launcher and others means of carnage. You collect keys to open locked areas, making your way to the exit of each chapter. There are plenty of secret passages to hidden weapons, hidden stages, and other incentives to explore stages a bit more. The gameplay loop is the same for just about every stage. But the fast, frantic, run and gun gameplay keeps it from getting old. It is simply good old shoot, survive and win fun. The level design is perfect the almost claustrophobic nature keeps your senses high. The AI is fine for a game like this. They move around and fire at you or charge at you backing you up into corners while you fire every gun off hoping not to run out of bullets. The number of enemies on screen mixed with a bunch of flying projectiles will have you hitting the floor often. Luckily, the manual quick save feature is there if you sense you are approaching an exceedingly difficult part. I think the game play is top-notch and still holds up well to this day.

The game features pre-recorded midi tracks from the original MS-DOS versions. The result is that the games sound more authentic. The music is as memorable as ever and makes the game seem more like an action movie. The guns still pack the same punch as before maybe even more so now with the audio seemingly clearer than ever before. You can hear grunts and groans of enemies waiting around the corner or behind locked doors. The game does not seem to suffer from any audio glitches or stutters that distracted from gameplay. 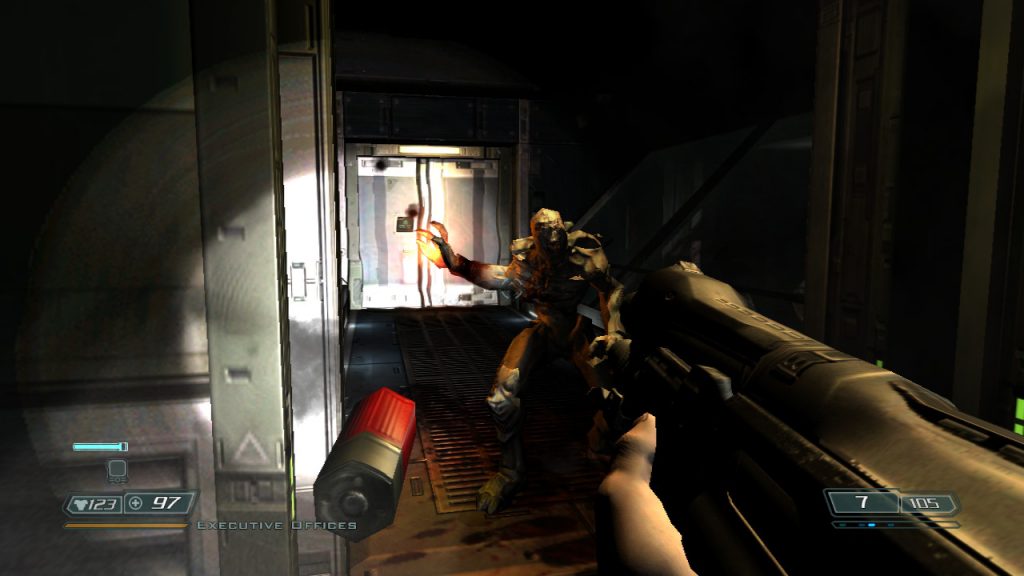 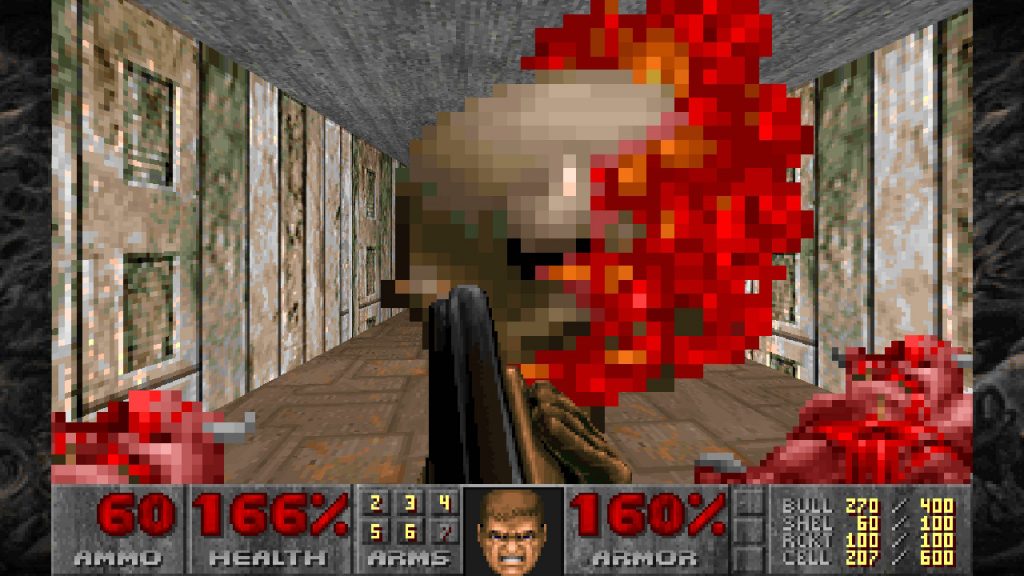 On to the Controls.

Using the Joy-cons or a Pro-controller the game controls the same… perfect. You control Doom Slayer (Doom-Guy?) with the left stick and rotate your head with the right stick. The usual FPS controls. D-pad will quick swap weapons right trigger fires the selected weapon. The shooting is quick and responsive without any noticeable input lag. Hit detection is spot on along with collision detection. So, no moments of missing enemies you have dead to rights and no being trapped in invisible corners or glitching into walls. Just you, your skills, and your guns to fight with and a horde of demons and hell spawn to fight against.

Now this is the real meat and potatoes of it all, the graphics. Now remember, this game is over 25 years old and even though somethings have been improved. This is not a remake. Yet, they did magic to the visuals. With the options for the original 4:3 and the more modern 16:9 aspect ratios. Both look great especially in the new 640×400 resolution bolstering a 60 FPS cap. Making the game run and look better than the original in every way. The difference in image quality and FPS is staggering after coming from the original or any port of the original without the image upscaling. Visually you will not be disappointed, you may even be surprised.

Doom 1 + 2 are great, almost perfect ports. The audio and visual upgrades along with the fact that most of the official DLC is included in 1 and 2. All the work put into this port to translate the fun from decades ago to a modern system. The setting, the shooting and the difficulty are perfectly balanced. The main thing that puts this over the rest is that this is a full portable (nonmobile) version of Doom. The multiplayer is included and intact. So is split screen multiplayer. This was done to give Doom fans another way to play the original Doom and I appreciate it and at $4.99 each, the price is right. If you do not have this included in your Nintendo Switch library stop delaying and start playing.