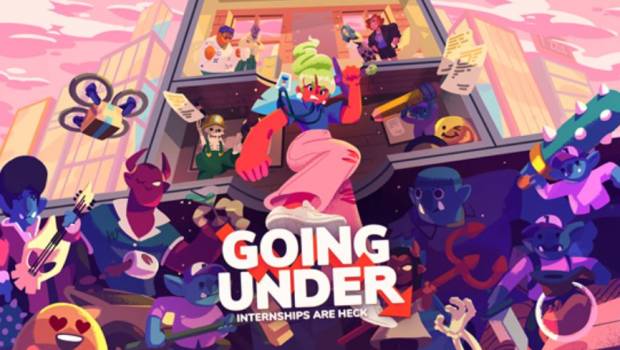 Don’t be late for your first day at ‘Fizzle’: Going Under launches today

Team17 and Aggro Crab Games are excited to announce the launch of satirical roguelite, Going Under. Available on consoles and PC, Going Under sees players thrust into the office appropriate shoes of Gen Z intern Jackie Fiasco, who quickly discovers her new employer, the high-tech drinks brand Fizzle, is storing a veritable labyrinth of dungeons teeming with enemies in its basement.

Armed with everything from body pillows, potted plants, giant pencils to PCs, Jackie must embark on her first (and possibly last) task – to take down the monstrous mutations of former employees and CEOs of the failed start-ups that came before, lurking beneath the feet of Fizzle’s oblivious workforce. While the staff training is limited, Jackie has a few aces up her freshly ironed sleeves; skills can be purchased and combined in game-changing ways, allowing for more bandwidth to hit the ground running.

Caelan Pollock, Co-Founder, Aggro Crab Games, said:
“We are so stoked that Going Under is launching today. With the help of Team17 we have created something that the team at Aggro Crab are beyond proud of. We hope players enjoy their first day at Fizzle, and that they don’t find the workload to be too killer”

Max Everingham, Head of Publishing, Team17, said:
“Going Under is a very exciting title for us, from the satirical gameplay, to the vibrant and eye-catching visuals, we hope players will enjoy their time in Jackie’s shoes – and while no two jobs are ever the same, we can promise that nobody has ever had a first day quite like this – Fizzle doesn’t seem to have a very good HR department…”