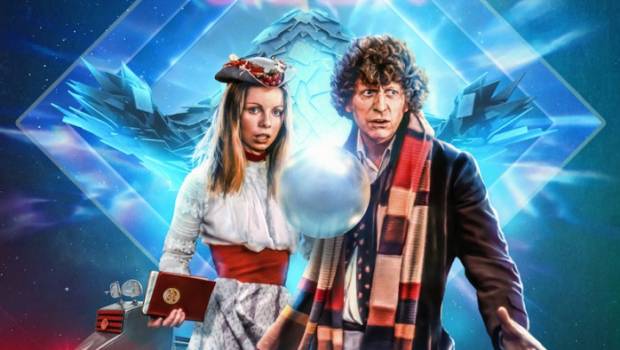 Summary: Shada returns from the dead in this new features that combines original footage with sparkling animation.

Shada is a curio amongst dozens of Doctor Who curios. Slated as the last story in Season 17, Shada was bedevilled, like much of Britain at the time, by industrial dispute. Despite shooting rescheduling, the entire production had to be abandoned, leaving disparate filmed elements on location in Cambridge, and a handful of scenes shot in studio.

The last producer for the classic series, John Nathan-Turner, sought to remount the production, with an eye to broadcasting it as a quasi-Christmas special. Alas budgetary considerations, as well as time, stymied these efforts. So, Shada, the last Doctor Who story written by the celebrated Douglas Adams, was left effectively on the shelf.

There were numerous attempts to stitch Shada together. There was a fan edit by noted fan and Northern Soul producer Ian Levine made during the 80s, followed by a more official VHS release in the 1990s, featuring Tom Baker as himself providing linking commentary. Later, a 1992 webcast, this time with Paul McGann filling the role of the Doctor, was released by Doctor Who audio drama specialists, Big Finish. And another fan edit, again by Ian Levine, this time with animation to fill the missing scenes, was produced and very nearly made it to official release.

And now we come to this Blu-ray release. After the success of the Power of the Daleks animation, Charles Norton and his team were approached to perform a similar miracle of animation with Shada. Again, the filmed elements from the late 1970s were utilised, and computer animation, with voice acting by most of the surviving cast, filled the gaps.

Disc one is the main feature. Unlike how it would’ve been broadcast in the 1970s, this feature lacks the episodic cliffhangers and is presented in movie format. There is a commentary track mixing cast members with the people producing the animation, in a variety of options – surround sound and mono, as befitted the original intent. The visuals are striking – Cambridge being the perfect backdrop to the story and a welcome respite to the usual quarries and factories the series fell back on.

Disc 2 contains the first set of features and is jam packed. There is a studio session from 1979, and another from its 2017 counterpart. The feature Taken out of Time looks at how Shada very nearly made it to original broadcast, and features Daniel Hill (Chris Parsons), an interview from 2005 with Shada director Pennant Roberts, the indefatigable Tom Baker all looking back at the making of the story. There are fond reflections on script writer Douglas Adams and the location shooting as a whole.

Now and Then looks at the different locations utilised on the week long shoot in and around Cambridge. Certainly a useful primer for those fans who enjoy location spotting on their travels.

Strike, Strike, Strike looks at the way unions and industrial action shaped television as a whole, and its severe impact on the production of Shada in particular. It is actually a very interest insight into the way television was made, and the conflict and conciliation that went into ensuring productions were made and broadcast. The irony was that while Shada was scuppered, the industrial action affecting the BBC basically meant that the ITV network went off the air, meaning the season as a whole had the largest viewing figures ever.

The Studio 1979 featurette presents a fasciniating behind the scenes view of how the production was made. Different shots are presented from what appears in the main feature. Similarly, the 2017 version presents the filming of a very special scene that appears right at the end of the main feature, showing the set up of the set. Other features include deleted scenes, model effects footage, a gallery of photos from 1979 and 2017 and much more.
Disc 3 contains the aforementioned 1992 VHS version, plus the 2003 Big Finish webcast.

It’s difficult to disentangle Shada from its tumultuous production history and the many and varied attempts to bring it to life. The home video market, and the enormous Doctor Who fanbase, has kept those hopes alive far longer than any other show would merit. As a story, Shada is definitely pure Adams and pure 1979, that being clever and wordy for its own sake, and prepared to take its time to build atmosphere, character and story. This production, what must now be considered the ‘ultimate’ version of Shada, is clearly a labour of love for all involved, especially those tasked in 2017 to bring it to life. It can safely be said that if this release of Shada is a commercial success, then animating other unmade stories (and there have been many over Doctor Who’s long life) and filling the gaps in otherwise missing stories, then that is the way of the future.