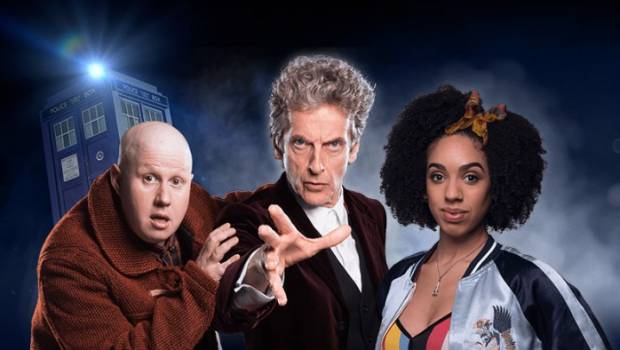 Summary: Doctor Who under Peter Capaldi is back in form in a great series of episodes leading up to the end of Capaldi's tenure. Old enemies, and friends, return in a cosmic clash.

Like the announcement of his own departure in the role (during a radio interview in the UK) the opening of Series 10 of the modern incarnation of Doctor Who was similarly low key. After the histrionics of the Clara Oswald era of the show, the production team and showrunner Steven Moffat embarked upon an effective reboot of the series, introducing a new companion, Bill Potts (Pearl Mackie) to the audience.

The giveaway is in the double-barrelled meaning of episode one, The Pilot – which tells the tale of an alien pilot stranded on Earth but also indicates the direction this series will take – a sweeping away of the thicket of the show’s often impenetrable history in favour of just telling stories that are exciting and engaging. Well, that was the intent.

The early stories in this series were intended more than most to introduce the new companion. Mackie, plucked from the theatre for this role, ably handles the expected duties of the companion. Refreshingly freed from the baggage, in the form of Clara Oswald, the series could embrace this simpler, happier character who just wanted to learn and grow. Stories like Thin Ice directly addressed the evils of slavery, while Smile did a similar take on colonialism in the context of emoji-faced robots imposing their own sinister brand of happiness on anyone who landed in the colony.

Sadly, the early impetus of the first quarter of the series is badly squandered with a linked three-story arc that forces the show so badly off the rails at the time it was difficult to see if the situation could be retrieved. Extremis, The Pyramid at the End of the World and The Lie of the Land are linked, but since they were written by three different writers, the tone of each is badly out of sync, and the logic of what the alien invaders intend never really makes any sense. By the end of the arc, the whole show has dissolved into nonsense, enough to leave a long time viewer almost crying with how incomprehensible it has all become.

Fortunately, the back to basics Empress of Mars, by long-time fan and television writer Mark Gatiss gets the series firmly back on track. Gatiss, in what is likely to be his last script for the modern series, has often been maligned, but in an era where complexity has become a watchword, his straightforward, faithful stories have often bought proceedings, as they do here, back on track. When a detachment of British Redcoats from the late 1800s finds itself swept up and deposited on Mars, they encounter the fabled Ice Warriors, and a new concept, an Ice Warrior Empress! There’s much derring-do and action, which only goes to show that no matter how high concept your vision is, all the audience really want is a 45-minute distraction.

From here, the series begins to improve in leaps and bounds. Writer Rona Munro becomes the first Doctor Who scribe to write for both the classic series and its modern take. The Eaters of Light is a fun, creepy adventure playing with history and alien monsters who, if not stopped, will devour the world.

The follow-up, The Doctor Falls, almost, but not quite, reaches the heights of the preceding episode. This should’ve been the episode the Doctor regenerates, but for reasons outside the purview of this review, the regeneration has been shifted to the Christmas Special. What we do get is an effective wrap up of the series, some classic dialogue, particularly from Capaldi, and a really effective scene effecting Missy/the Master’s future. And there is the very final scene in an icy wilderness featuring an old, old friend…

Overall, series 10 is a vast improvement on the navel gazing of the previous year. Freed of the shackles of Clara Oswald, the series embraced a fresh new companion who challenged the Doctor without wanting to be the Doctor. Old prejudices (race, colonialism, homophobia) are handled in a way that meets today’s zeitgeist. The middle does sag badly under the weight of a massive misstep an experienced production team shouldn’t make at this late stage. That aside, the beginning and end to series 10 make a worthwhile chapter in the show’s history.
And while Capaldi’s announced departure was low-key, his farewell will be anything but. Easily the best actor to take the role in the modern series, he has occasionally been hamstrung by indifferent writing. But Capaldi’s love for the show and the role has always shone through and hopefully, hopefully, through all the extra stuff Moffat has thrown at Twice Upon a Time, the upcoming Christmas Special, Peter Capaldi will get the farewell he so richly deserves.

It goes without saying that the blu ray treatment of the visuals and audio are an absolute treat. Whatever your setup, you are sure to be enriched by the show’s signature visual style, and if, like me, you’re a fan of this version of the theme, cranking up the volume will have you, and the crockery, jumping. But don’t do it at midnight if you don’t want an angry letter from the neighbours shoved through your mail slot…

Extras:
As befits a series boxset, this blu ray release is chockfull of extras. This set features the 2016 Christmas Special, The Return of Doctor Mysterio (a pastiche, or if I’m being unkind, which is often, a wholesale rip-off of the Superman mythos) along with a making of. For those audiophiles out there, there is a binaural soundtrack for the rather odd episode, Knock Knock (featuring Poirot’s David Suchet). There are deleted scenes, , a look at Rona Munro (remarkably still writing in the industry) a look at Doctor Who: The Fan Show and a bevy of audio commentaries for those happy to get into the weeds (and heads) of story participants.