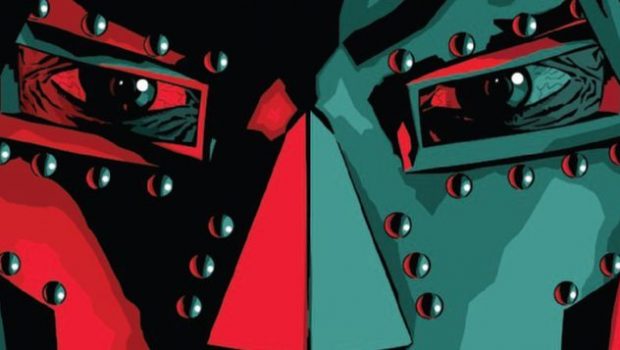 Summary: Cantwell and Larroca combine for an interesting inside look at the psyche of everyone’s favorite benevolent dictator, Victor Von Doom.

Christopher Cantwell, co-creator of TV show Halt and Catch Fire, makes his Marvel comics writing debut with this issue and immediately hits the ground running. He shows a strong appreciation for the history of the character, drawing from Doom-related developments both new and old (like relatively new addition to the Latverian mythos, Victorious). This issue takes us into a typical day for the good Doctor, as he vehemently decries the new Antlion station on the moon, a project developed to fight climate change. He warns of a “disaster of interstellar proportions” in what reads like a clever inversion of the ignored warnings from Reed Richards to a young Victor Von Doom on the fateful day that ruined his face. While at first it is strange to see Doctor Doom as a talking head on a morning news show, it fits with the portrayal Cantwell is going for. For example, at one point, Doom is belittled and interrupted by the show’s host in a bit that initially appears to be played for laughs. It’s revealed later in the issue that the host has been captured and is being tortured within the walls of Doom’s castle – showing the reader that this is still the Doom that they know so well. Cantwell deftly deconstructs Doom’s portrayal in a way that I’m not sure I’ve seen before while still managing to maintain his strong characterization.

On that note, Cantwell’s characterization is the strongest aspect of this issue. We’re treated to several of Doom’s daydreams throughout, where the masked ruler observes a life he could’ve had: as a modest hero, celebrated as savior of the world with an unscarred face and a loving family. These visions are wonderfully juxtaposed with a miserable, lonely Doom writing about a lost world in his darkened study. The knife is twisted even further for the reader, knowing how close he was to this ideal after the events of Secret Wars, only for him to revert back to his old ways.

Another piece of characterization which works excellently is Doom’s immediate choice to surrender when faced with casualties in his homeland after being framed for an attack on Antlion. Despite being one of the Marvel universe’s most feared villains, Doom has a very real love for his people and a genuine sense of honor. He truly wishes for no unjust bloodshed. In much the same way, it feels very in-character when Doom’s pride keeps him from being taken in by two D-listers in Union Jack and Agent Zero late in the issue. He quickly dispatches his would-be captors before going out on his own terms. Ultimately, Cantwell does a fantastic job in giving us a new look at Doom that still feels like it belongs.

Salvador Larroca produce a pretty good issue here. The highlight of the artwork is Doctor Doom’s masked visage. The success with that rendering goes a long way – if you’re going to nail any aspect of the art in a book called “Doctor Doom,” it better be the iconic mask. Larroca manages to capture the menace of the mask while simultaneously using Doom’s exposed eyes to convey emotion. At times, the illustration is very evocative of the work that Esad Ribic did with the character in Secret Wars – and that is definitely a good thing. If I have any gripe, it’s with Larroca’s facial work early in the issue, as the newscasters faces tend to get a bit rubbery. Ultimately, that’s minor and his work with Doom is very impressive.

Equally impressive is Larroca’s work with the setting of Latveria and Castle Doom in particular. Larroca really instills the place with a sense of grandeur befitting the country’s ruler. Two large panels in particular really caught my attention. The first is a shot of Doom discussing strategy with his advisors as they traverse a long hallway. The intricate architecture, stained glass and suits of armor that surround the scene all give the castle a bit of character in and of itself. Next, there is another scene where we see Doom in his dimly lit study. There is a ton of attention to detail in the room, Doom is surrounded by loads of items befitting his lofty character: a huge bookshelf, tribal mask artwork, a sickle, a dagger, and various sculptures and tapestries. In this way, Larroca’s rendering of Castle Doom also provides a bit of characterization for Victor.

Cantwell delves deep into the inner workings of Doctor Doom’s mind with this debut issue and nails the characterization. Larroca delivers a solid performance, but really shines with his depictions of the titular character’s iconic mask as well as the setting of Castle Doom.