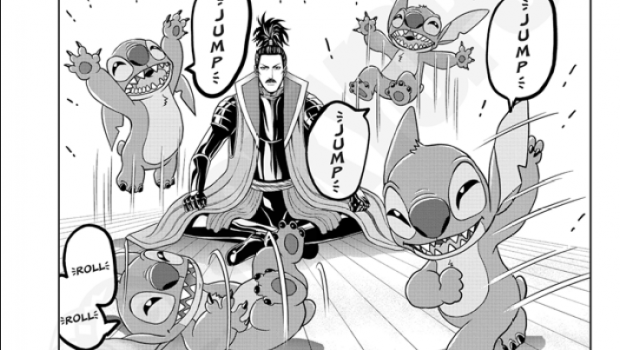 Summary: A fun story and well worth it if you have an interest in the character.

Sitch escapes from the lab of the Galactic Federation and crashes his ship on earth in Sengoku-era Japan only to be adopted by warlord Yamoto who completely forgets to go attack his enemy as he is obsessed with the cute blue critter.

Not sure if this is set before or after the movie (I have not seen it but know of it), but this makes a good continuation of that story if you like Sitch and want to see more of it.

Sitch does not say anything except his own name so most of the dialog is from Yamoto who has to be all brave and tough in front of his men but gets to be himself when he is with Sitch.

It is a graphic novel but I found it quite easy to read and you can just read a bit at a time and not have any trouble working out what was going on. Even though it says it is a Manga, it has been westernised otherwise you would read it front to back. Usually, the layouts are flipped for the story to make sense for the westernised version but there is no note about this being done here so it must not have been published in Japan first.

This is obviously meant for the younger readers but I would recommend it if you have an interest in Sitch and want to see more stories involving him. The story does seem very wholesome considering Yamoto is meant to be a brutal warlord and the time period is meant to be very violent.

While the artwork is in black and white I thought it works quite well for the story with very expressive linework and you could always colour in Sitch yourself if you really wanted to. It is hard to imagine Sitch being any other colour except blue but in this version you could imagine another hue.

A fun story and well worth your time if you have any interest in this character.