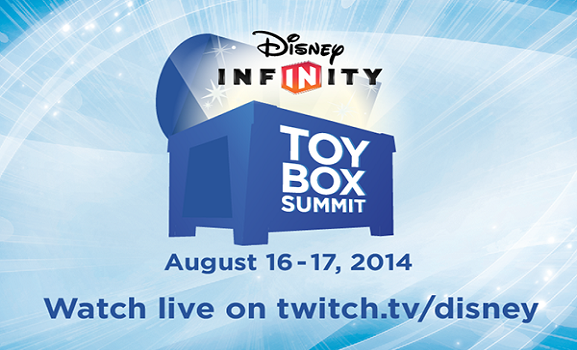 Melbourne, Aust. – August 15, 2014 – Disney Interactive today announced the schedule and Twitter / Twitch details for the inaugural Disney Infinity Toy Box Summit, which takes place this weekend at Avalanche Software in Salt Lake City, Utah. During this two-day invite-only event, 22 of the most talented Disney Infinity Toy Box designers from all over the world will have exclusive access to the new Disney Infinity 2.0: Marvel Super Heroes Toy Box, meet the development team at Avalanche Software, including newly hired Community Level Designers (former community members) Crazybynick and Papa Echo and participate in a Toy Box Design Challenge for the chance to win a special Disney Infinity prize pack.

“Each week, we challenge fans to build and submit their best Toy Box creations, so I’m excited to have the chance to see some of our biggest competitors create in real-time,” said John Blackburn, Vice President and General Manager, Avalanche Software. “To date, we have received hundreds of thousands of submissions and nearly 13 million Toy Boxes have been downloaded, which is a testament to our talented fans, including our Toy Box Summit guests whose creations inspire so many other fans to join in the fun.”

The company is inviting the entire fan community to participate in this weekend’s event remotely by tuning in to Twitch (www.twitch.tv/disney) at the times listed below and using #DisneyInfinity on Twitter to submit questions, vote for winning Toy Boxes and more:

2:00AM AEST: Toy Box 2.0 Competition – Join us as we play through the artists’ Toy Boxes and vote for your favourites on Twitter using #DisneyInfinity and #ToyBoxArtistName!

To view a video highlighting the top creations of the Toy Box Artists attending the summit, click here: http://youtu.be/YUK-J2mhdV0