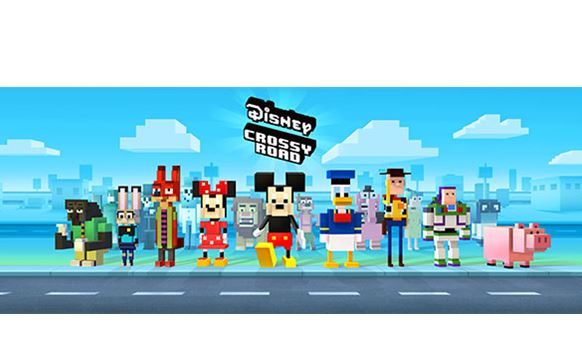 MELBOURNE, AUST., April 8, 2016 – Disney and Hipster Whale today launched Disney Crossy Road for mobile devices, an 8-bit endless arcade hopper that challenges players to cross the road with their favourite Disney figurines for as long as they can. Based on the original Crossy Road game from Australian studio Hipster Whale, which has been downloaded more than 120 million times to date, Disney Crossy Road lets players hop through nine different Disney and Pixar-themed 8-bit worlds including: Toy Story, Zootopia, The Lion King, The Haunted Mansion, Tangled and more.

In Disney Crossy Road, players tap and swipe their way to a record-setting number of steps while dodging unexpected obstacles. Players can collect more than 100 Disney and Pixar figurines along the way, including Mickey Mouse, Donald Duck, Buzz Lightyear, Rapunzel, Mufasa, Sadness, Wreck-It Ralph, Madame Leota, and many other favourites.

“Disney Crossy Road brings together some of Disney’s most popular characters with one of the world’s most popular mobile games,” said Chris Heatherly, SVP & GM, Disney Interactive Games, Disney Consumer Products and Interactive Media. “We’ve worked closely with the team at Hipster Whale to come up with some fun new twists on the original game to make it uniquely Disney Crossy Road.”

Each of the nine Disney and Pixar worlds in Disney Crossy Road have themed gameplay challenges and mechanics that are built to reflect their unique world, as well as 8-bit versions of hit Disney and Pixar tunes like “You’ve Got a Friend in Me” and “I Just Can’t Wait to be King”. For example: